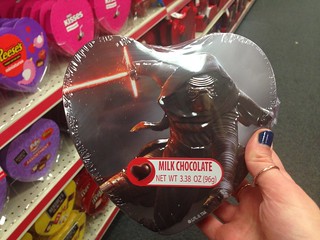 I desperately need this tin to store my hardcore sewing supplies.

It’s snowing like a monster here in New York, so I’ve been spending my weekend wearing the same pair of thick socks, making oatmeal cookies, and crafting. (Painting a tin and cutting some postcards out of a Star Wars-themed cereal box is crafting, right?)

At Lady Business, Renay and I continue our Adventures in Xena with “The Greater Good.”

This article about a group of rationalists trying to spread the word through a rationalist self-help program is weirdly fascinating.

And from the same issue of The New York Times Magazine—a piece on Alice Guffman, the sociologist who wrote On the Run. The piece talks a lot about the ethics of sociology, which is really interesting.

At GQ, Nathan Rabin questions the assumption by many a male celebrity that the media should inherently take their side against women.

I kept noticing how pretty Fox News’ Megyn Kelly looks on the cover of the most recent issue of Vanity Fair while out and about, so I finally just read the article. It’s a very adoring profile of her and she is the kind of woman who actively doesn’t identify as a feminist, but it’s a good read.

Somebody asked Mark Hamill if Luke was bisexual. Hamill, bless him, responded that “His sexuality is never directly addressed in the films. Luke is whatever the audience wants him to be, so you can decide for yourself.” Awwww.

In Star Trek Beyond, Sulu will be keeping a picture of his little girl at his console. Presumably, this is the alternate original series’ version of Demora Sulu, who appeared in Star Trek: Generations. YES. GOOD.

So… those lily white Oscar nominations with a side of a cisgendered dude nominated for playing a trans woman, eh?

Her Story, a webseries about two trans women embarking on relationships, is now available on YouTube and comes highly recommended by Autostraddle!

Wait, Suicide Squad looks fun? Like it has embraced its 2004 Hot Topic manager aesthetic? I am deeply suspicious. (Here’s a shot-by-shot, if you are so inclined.)

Steve Rogers is taking up the mantle of Captain America again in Marvel comics—but Sam Wilson, the current Captain America, is staying right where he is. This feels like a weird decision.

This is a really cute comic sequel to Star Wars: The Force Awakens.

POUND THE ALARM: Genevieve Valentine is writing the new Xena: Warrior Princess comic! It’s set after the series, so I’ll have to wait to read it, but I am so excited.

Star Wars: Episode VIII has had its release date bumped from May 2017 to December 2017. I am totally fine with that, honestly? It’s really fun to have Star Wars in December. (It reminds me of when The Lord of the Rings was in December!) Rewrites might be the reason for the delay; apparently, there’s some rewriting to focus on the new trio even more.

A Charlotte, North Carolina, coffee shop owner is revealed as a pick-up artist of the worst kind, and the community responds in a lot of different ways.

Anne Helen Petersen looks at Robert De Niro’s latter day career and wonders if he is, in fact, slumming it.

John Walker always played as Princess Peach in Mario Kart as a little kid, because she was the queerest option available. He reaches out to other queer nerds and they end up talking about the queerness read into the Mario Kart roster. Obviously, this is 1000% up my alley. (I also played as Peach, but largely because she was a blonde girl like me.)

The creators of Welcome to Night Vale are launching a new podcast called Alice isn’t Dead, which stars Jasika Nicole as a trucker in search of her missing wife. It debuts in March, so keep an eye out.

Book bloggers Ana, Jenny, Heather, and Andi have brought back Book Blogger Appreciation Week! I have already signed up.

The Atlantic looks at the changes facing the American Republican Party. It’s a really interesting look at how the party divides along class lines.

Clothes on Film interviews Michael Kaplan, who did the costume design for Star Wars: The Force Awakens. Every time I am told that Kylo Ren’s cloak is lacquered cotton, I swoon. (Because of lacquered cotton, not because of that jerkface.)

This is a very long and very thoughtful piece about sexual violence at Morehouse and Spelman, complicated by the schools’ status as historically black colleges.

Suddenly, we’re in a world of conspiracies and serious consequences. I recognize that it’s a low form of criticism to complain that a piece of art is something other than what you wish it was, but “London Spy” ended up crystallizing for me why I’ve been feeling burned out on my job of late: The stakes in pop culture have gotten so high and so predictable that they often cease to make me feel anything at all.

The thing is, I didn’t need a Fifty Shades of Gay subplot, a sleeker version of the cryptex from “The Da Vinci Code,” or the kind of bulletin board studded with clippings and string that indicates someone is either a serial killer or an underestimated detective to be interested in Danny, Alex and Scottie. The first fifty minutes of the pilot have enough going on to be fully intriguing: Alex’s attempts to build a relationship with Danny despite his very unusual way of seeing the world; the warmth and complexity of the almost parental relationship between Danny and Scottie as a window into the generational conflicts of contemporary gay life; the drama of sex in a world in which HIV is marginalized, but not fully defeated.

Darby Forever is an upcoming twenty minute short by Saturday Night Live’s Aidy Bryant about a daydreamer who works at a hobby shop. It looks wonderful, honestly, and I’m really pleased to see Bryant branching out.

Stephen Moffat is leaving Doctor Who after the next season! There is a Santa Claus, kittens! Broadchurch’s Chris Chibnall will be replacing him.

BuzzFeed LGBT looks at the new world of coming out, queer futures, and the very fine line that exists between “I don’t label myself” and “I don’t want to cede assumed straight privilege” (and how the latter is necessary in some contexts and patronizing in others).

Books
Purchased: None
Added: Once Upon a Galaxy by Alan Arnold, Heir to the Empire by Timothy Zahn, and Space Opera, edited by Brian Aldiss (via How Star Wars Conquered the Universe)