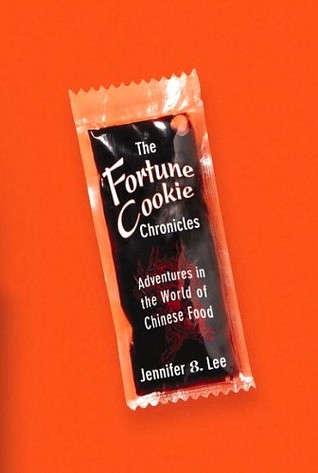 It makes sense that my last read of 2015 (I had no room in my suitcase or laptop backpack for books, quite frankly, which is probably another reason I don’t like traveling) was food-related: I finished it just before visiting my family for the holidays, which always involves executing Christmas dinner with all the professionalism of a mad scientist. (I have an almond cake cooling on the counter as I type. Can you replace olive oil with almond oil one-to-one? I GUESS WE’LL FIND OUT!)

Jennifer 8. Lee’s The Fortune Cookie Chronicles is an exploration of Chinese food in America. Spurred on by the strange and strangely common phenomenon of multiple lottery winners getting their winning number from fortune cookies, Lee, a journalist by trade, uses her investigative chops and her Mandarin language skills to investigate how American Chinese food came to be. Along the way, she encounters truckers who think Chinese restaurants make for more consistent dining experiences than fast food chains, travels to China to find a Chinese Jewish woman to answer the question of why Chinese food is so central to American Jewish culture, and tries to divine the true origin of fortune cookies, among many, many other things.

I’ve always kind of known that American Chinese food is not “really” Chinese food. Growing up, my family reached for Thai food instead of Chinese food whenever it was time for takeout, so my first major experience with Chinese takeout was at a sleepover. For someone who loves both fried chicken and sugar, sweet and sour chicken was a very satisfying experience, but I never really picked up a taste for it like some people have. As a teenager, it just seemed so tame and safe.

Which is pretty ironic, given that Americans’ initial responses to Chinese food with the first major waves of Chinese immigration during the American Gold Rush was so negative. There were accusations that the Chinese were eating rats, let alone the supposed fact that spicy foods would incite terrible lusts and behaviors among white Americans. So how did it end up becoming so ubiquitous in American culture that it’s become comfort food for people without any Chinese heritage?

Because the Chinese Exclusion Act of 1882, passed because enough American politicians and voters believed that Chinese immigrants were stealing American jobs (sound familiar?), banned them from working in certain fields. This left largely women’s work, like cooking and laundry, as the only work considered “suitable” for Chinese immigrants. And in order to appeal to the American palate, traditional Chinese cooking had to be tweaked.

It’s not a pretty or fun answer, but Lee’s best talent in The Fortune Cookie Chronicles is her ability to cover both lighthearted and devastating material in the same volume. She looks at the horrors of illegal immigration with clear eyes in one chapter and charmingly attempting to divine the best Chinese restaurant in another, in a way that doesn’t overplay one or downplay the other. This makes sense, given Lee’s background as a crime journalist, and also explains the more scattered nature of the book.

While the search for the origins of the fortune cookie functions as more or less of a spine for the whole endeavor, The Fortune Cookie Chronicles feels more like a collection of articles on the same subject instead of a cohesive history of Chinese food in America. And that’s no bad thing, although, to be fair, I often get lax about structure as long as I’m learning and having fun. the funnest parts of The Fortune Cookie Chronicles. The chapter on the Great Kosher Duck Scandal, which looks at the link between American Jewish culture and American Chinese food, is amazing—it’s like something I’d pick up on Longform to read over my Sunday breakfast. Honestly, like most nonfiction reviews I write, this could easily devolve into listing off the cool things I’ve learned from this book. Like how Misa Chang is the woman who popularized delivery at just the right time in American history, or how Chinese-American restauranteurs took advantage of the vacuum in the food industries left by Japanese internment in World War II.

But even though I enjoyed it, ultimately, it doesn’t leave much of an impression, although I’m certainly glad it exists. If only there was a book like this for every cuisine popular in the United States!