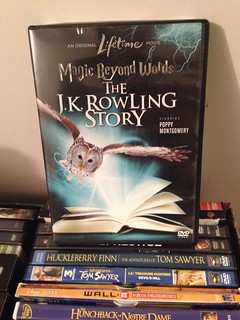 Why does my family own this on DVD? Did I buy this while I was asleep or something?

At The New Inquiry, Christine Baumgarthuber explores the “Cooperative Kitchens of Yesteryear”. It’s an interesting look at women managing and sharing domestic work as communities of women. It reminds me strongly of the proposed (but perhaps never implemented?) idea of laywomen communities structured like nunneries.

A seventeenth century biography of the Ethiopian saint Walatta Petros is the earliest known biography of an African woman, and it’s recently been translated into English!

This article from NPR’s Code Switch about how people of color with albinism negotiate their racial identity is fascinating.

Hey, remember J.J. Abrams’ comments about Star Wars being available to girls now? Yeah, he’s apologized for being unclear and explained what he meant by those comments. Good practice.

Annie Zaleski breaks down why “All I Want For Christmas Is You” is such an immortal Christmas song, touching on how the song is constructed, how difficult it is to write new Christmas songs, and how flexible the song actually is.

This is the calendar I’m going to print out for my day job calendar for 2016.

Angry parent Kevin Wong exposes Elmo for the Sesame Street-ruining monster he is.

Charlie Jane Anders explores Star Wars’ effect on politics—specifically, how it made Reagan happen. Star Wars is often seen and read as outside of politics, despite its pop culture dominance, so this was absolutely fascinating. And explained a lot about how the war movies of the seventies transitioned into… well, Top Gun.

This Vox article on the state of Islamophobia in America is horrifying.

“The Last Human Robot” is a touching profile on Anthony Daniels, the man behind C-3PO, and his relationship with the franchise over the last few decades.

Fan/Fic calls a time of death for tumblr fandom, and as a fandom old, I am kind of delighted that we’ve got platform jump sign for the whole operation yet again.

Matter’s Men Issue has two amazing articles—one on Zayn Malik as the reinvention of the modern Muslim man by Fariha Roisin and one by Arabelle Sicardi on how male judgment has shaped beauty in history.

Well, this time next week, Star Wars: The Force Awakens will be upon us, so have this video of fans waiting for and reviewing (on the spot) The Phantom Menace. (The best part: N*SYNC asking a little girl whose favorite character is Vader if she wants to marry him; her stone-faced “no” is perfect. This girl wants to be Vader, LEAVE HER ALONE JUSTIN.)

Nicole Tompkins-Hughes talks about how heteronormativity is pushed on kiddos at a young age using The Peanuts Movie as an example.

If your holiday adventures include donating to thrift stores (look, I can only take five DVDs back with me!), Goodwill will pay your postage for any packages sent to them!

Mary Fan writes about the ten ways writing while underrepresented messes with your head.

Sofia Boutella might be the Mummy in the Mummy reboot? I’d be down for that.

Lucasfilm president Kathleen Kennedy seems open to live-action Star Wars TV series—specifically, that the cancelled-in-development Underworld is still being considered for development. This does not, however, rule out the Obi-Wan on Tatooine show that I do want. (But who can possibly play a young Bea Arthur as well as Ewan McGregor plays a young Alec Guinness?)

The Alamo Drafthouse Cinema has put together a special Star Wars menu for Star Wars: The Force Awakens. I am going to make this menu at home at some point.

Mallory Ortberg speaks to the Financial Diet about the Toast and its financial logistics. I found this really eye-opening.

Anita Sarkeesian, Jaclyn Friedman, and Renee Bracey Sherman have compiled Speak Up & Stay Safe(r): A Guide to Protecting Yourself From Online Harassment, using, sadly, their own experience of being harassed online.

Cate Blanchett might be in Thor: Ragnorak. As who, though? I like the A.V. Club’s theory of Hela. I cannot see her as Valkyrie, however. …oh my sweet Lord, if she is playing Karnilla the Norn Queen to someone else’s Amora the Enchantress, I would just pass out from sheer joy.

Mark Bowden at Vanity Fair reminds us why Trump is the worst.

X-Men: Apocalypse could be a lot more eighties (I will not rest until I see some Duran Duran on that soundtrack, so help me Bowie), but Miami Vice!Xavier looks worth the price of admission. (Also, yay, Rose Byrne’s back!)

This holiday season, consider donating any extra books you’ve got to local prisons.

Reading this BuzzFeed article on gloving is what being old must be feel like.

Andy Serkis is working on a Rumpelstilskin movie.

“Jingle Bells” was written by a racist pro-Confederate!

A tiny Star Wars fan wanted a Princess Chewbecca cake for her birthday. And the bakery delivered.

Hari Nef talks about misconceptions about being trans.

Jamaican author Marlon James has stated that his next book will be an “African Game of Thrones.” YES!

The Mystery Science Theater 3000 Kickstarter is over, and we’ll be getting fourteen new episodes of the show. Huzzah!

Respected Irish news reporter Jonathan Clynch has announced that he is gender fluid and will be going by Jonathan Rachel Clynch. Go, Jonathan!

Essie is reproducing Starry Starry Night and several other retired colors in a new Retro Revival Collection. This is bonkers important, because Starry Starry Night is a legendary nail polish for nail polish freaks—it’s a rare blue from back in the day, it was discontinued in 1998, and continued actual diamond dust for a while. It’s the kind of thing people pay hundreds of dollars for on eBay. Well… not anymore.

Books
Purchased: None
Added: The Life and Struggles of Our Mother Walatta Petros by Galawdewos and translated and edited by Wendy Laura Belcher and Michael Kleiner (via the Guardian), The Empress Game by Rhonda Mason (via the Book Smugglers)