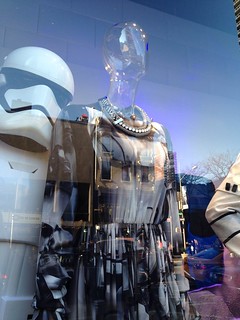 Why yes, that is Gwendoline Christie’s Captain Phasma gown in the window of Bloomingdale’s. Star Wars has taken ahold of me and may never give me back.

News of the San Bernardino shootings hit me like a ton of a bricks, and it pains me that we’re here again. Or, rather, that my country is always here, with more mass shootings this year than there have been calendar days, with two occurring on Wednesday. This has to change. This has to change.

Twitter user FeministaJones explains, via Storify, the cultural import and impact of The Wiz.

Stores are running out of Star Wars: The Force Awakens merchandise featuring Rey, the film’s female protagonist—which is hilarious, considering that Disney has been leaving her out of action figure sets. The market has spoken!

Did you know that a disco remix of the Star Wars theme charted in the late seventies? WHAT A TIME TO BE ALIVE (that time being back then).

On the one hand, it’s really great that J.J. Abrams is actively trying to make Star Wars: The Force Awakens a film that welcomes viewers of all genders and ages. On the other hand, lady types of all ages have loved Star Wars since 1977 without much in the way of active encouragement, so it feels a little patronizing that we need permission now.

Here’s Gwendoline Christie in a gown with her (armored) face all over it, posing with a blaster, and talking about how Captain Phasma is such a great female character because the design forces you to only consider her actions and words. Mrs. Captain Phasma mugs, here I come.

Stormtrooper action figures doing anything funny are my weakness, so here’s a bunch of them putting up a Christmas tree and riding a dog.

Everybody wants to be Han Solo in the upcoming young Han Solo film—to the tune of about 2,500 actors. Of the names floated, only Rami Malek interests me, although I think his charisma is a little too pointed and clever to be sentimental ol’ Han. Of course, the only young actor who combines all the key traits—grumpy on the outside, gooey on the inside, able to murder in cold blood—nowadays is Jennifer Lawrence, and I don’t think she’s gonna get cast.

Stephany Folsom will be writing Thor: Ragnarok. Yay! I also totally forgot that Taika Waititi is directing that, which means I am going to love it.

DJ Earworm’s annual mash ‘em up United States of Pop has dropped for 2015, and it is, as always, a treat. I love these mashups.

Trying to get rid of some old comics? You can sell them or donate them, and now you can donate them to soldiers overseas!

The Danish Girl has been released. Here’s Carol Grant on why it’s both awful and harmful, and here’s Rani Baker on how it has more to do with a specific subgenre of erotica than actual trans experience.

Malinda Lo has a new book coming out—a YA mystery called A Line in the Dark. And yes, she has confirmed that there will be lesbians.

To promote Omaze’s latest fundraising campaign, Mark Hamill took to Hollywood Boulevard in a Stormtrooper outfit to spread the word. The results were adorable.

Here’s a nice piece from The LA Times about how the 501st Legion, those lovable, charitable hordes of Stormtroopers, got started and how they’re organized.