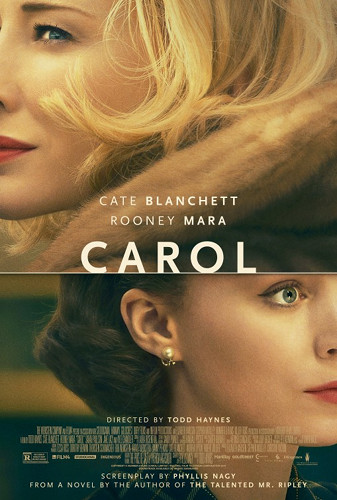 Carol
based on The Price of Salt by Patricia Highsmith

I’ve been thinking about Todd Haynes recently, largely because I recently watched a fanedit of the Star Wars prequels and that reminded me to watch Velvet Goldmine. Specifically, I’ve been thinking about how amazing it is that Haynes directed both Velvet Goldmine and Far From Heaven. They’re both pitch-perfect period pastiches of very, very different times and places.

Which makes him a perfect choice for adapting The Price of Salt, Patricia Highsmith’s midcentury lesbian romance novel. It’s been an interesting journey into propriety for The Price of Salt—Highsmith originally published it under the pseudonym of Claire Morgan and didn’t claim it as her own work for decades, and now it’s been given the sort of classy, stylish, and polished treatment that will undoubtedly garner it attention and awards come awards season. (Which is not that far away!) This is not, to randomly grab a recent disappointing mainstream film about ladies in love, Jenny’s Wedding, offering remedial lessons on lesbian identity and apologetically tap-dancing around anything a very narrow segment of the audience might find uncomfortable (i.e, expressing romantic same-sex affection). This is a glossy retro drama in its fullest flush that rightfully assumes that anyone interested in seeing this picture is going to be more than fine with its content and wastes absolutely no time on coddling a close-minded audience.

And that’s really refreshing, although the release of The Danish Girl is a huge reminder that we’ve got a very, very long way to go when it comes to LGBT representation onscreen. (Everything I read about The Danish Girl makes my skin crawl. I hope someone makes a proper adaptation of Elbe’s own writings in the future.) Obviously, the legal and social realities of being a queer woman in midcentury America are obstacles for our heroines, but we never see either of them agonize over their attraction to another woman. While Rooney Mara’s Therese never talks it out seriously with anyone beyond prodding her erstwhile boyfriend for any first hand accounts of same-sex relationships, it’s clear that her sudden connection to and longing for Cate Blanchett’s Carol answers several questions for her. It’s as if she can now see the previously hidden world of queer women, making impressed but tentative eyes at a butch/femme couple she encounters in a record store and suddenly aware, at a party, that a girl chatting to her is interested in her and that any interest on her part would be welcome. And Carol has a firm hand on who she is and how fundamental that is to her living a full life. When her husband accuses her of becoming a woman “like that” (referring to her friend Abbi), she snarls that he married a woman like that.

Carol delves into Carol’s identity as a queer mother in a way that The Price of Salt, written exclusively from Therese’s perspective, never did. Being a beautiful historical film about women in love already sets Carol apart, but I think that it’s this exploration that really makes this film unique. Carol is a mother and she absolutely adores her daughter, Rindy. But she lives in a set of historical, social, and personal circumstances that ask her to deny her agency and any hope of love in order to be a mother… and absolutely nothing else. In the eyes of Harge and Harge’s divorce lawyers, Carol’s “lifestyle” indicates that she is an unfit mother, because you “can’t” be a lesbian woman and a mother at the same time. (That specific nuance shouldn’t be lost, but the situation also recalls ideas about women being either mothers or lovers.) And Carol struggles with this, actively, sometimes contemplating giving in so she can be with her daughter. When Carol has to make, finally, the heartbreaking decision that she does just to live a life as a full human being, it’s both a victory and a loss.

The film is full of quiet, simmering performances, with little on the surface that nonetheless indicate the immense internal processes of the characters themselves. There’s been a lot of talk about how good Blanchett’s performance is, and it’s all very well-deserved. Unfortunately, a lot of Cate Blanchett’s acting choices as Carol recalled my mother too specifically (like, direct quote specifically) for me to ever really get over that hurdle, which was… fun. But Blanchett and Mara have a deceptively prim chemistry that’s absolutely explosive. For the first half of the film, as Therese gets closer and closer to Carol without ever articulating to herself why, it’s almost like Carol is a strange, glamorous compulsion. Neither ever say anything about their attraction to each other until they succumb to it in a motel. In a lesser film, that might feel odd, but in this film, where every casual touch between the lovers is explosive, it works perfectly.