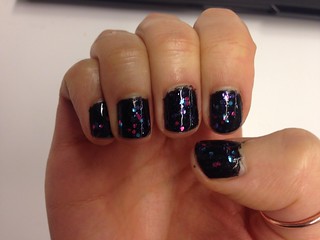 I went to a screening of a fan edit called The Rise of the Sith of the Star Wars prequels yesterday, which was quite interesting. I’m not familiar enough with those films to evaluate the edit as deeply as I’d like, but I really liked how streamlined it was. Like, The Phantom Menace was removed almost entirely. Very efficient.

Someone (supposedly GamerGate) photoshopped an image of a Sikh man to look like a Paris attacker. Luckily, the guy figured it out and it’s made the news, but it’s a stark reminder of the misinformation that can go around after something like this. Be careful.

Amber Scorah’s son died in daycare. In The New York Times, she writes about the horrific experience and calls for better parental leave policies.

For Trans Awareness Week, Autostraddle put together a list of ten historical trans women you should know about.

This photoset tracks the face molds used for Barbie over the last fifty-odd years. If you played with Barbies as a kid, it’s interesting to see which faces look weird and which faces look normal to you.

At The New Yorker, Adrian Chen writes about how Twitter taught a member of the Westboro Baptist Church empathy and gave her a path away from that church.

Mey at Autostraddle gives us “The Complete History of Transgender Characters in American Comic Books.”

Fader interviews Zayn Malik after his departure from One Direction. His upcoming music sounds solid.

Lord of the Rings co-writer Philippa Boyens is working on an adaptation of The Merlin Saga for Disney! Yay!

How To Be Single is a romantic comedy I had no idea was in the works, but looks… surprisingly adorable? Like Dakota Johnson, who is a ray of sunshine, is the lead, and Rebel Wilson is her bad idea friend. And they have great chemistry and seem to enjoy each other’s company in a really organic way? It’s quite rude—there’s a few jokes from a sauna scene where Wilson teases Johnson about, uh, personal grooming—and that’s great to see for a lady-led romantic comedy. I APPROVE.

Carly Simon has revealed that a verse of “You’re So Vain” is about Warren Beatty. So that’s why I’ve been listening to it all week.

The Huntsman: Winter’s War looks bonkers and I am all about it. It also uses Halsey’s “Castle”, so: A+, team.

Thanksgiving is upon us, whether you would have it or not, which means you need to start thinking about holiday gifts. Memory’s got a Marvel comics gift guide to help you get started.

Leia just used a lightsaber for the first time in Marvel’s Star Wars comics. Han and Chewie did, too, but… I always assumed you had to be Force sensitive or really, really good with a blade to use a lightsaber properly without burning yourself to death?

A tumblr user explodes someone’s dumb argument that homosexuality is unnatural by turning their hideous example of straight island, lesbian island, and gay island (I guess I just drown in this scenario?) into a sff novel. NICE.

Here’s where and when you can tune into the Mystery Science Theater 3000 Turkey Day marathon.

The New York Times Magazine has a stunning, lengthy piece about women in Hollywood.

Here’s what Megan Gale would have looked like as Wonder Woman in George Miller’s Justice League.

Washington Post fashion editor Robin Givhan turns her eye on Donald Trump after he insults a protester for their weight.

Google Play is giving away free copies of Thriller for Thanksgiving!

At Rolling Stone, David Kushner talks to Aziah “Zola” Wells and the other “stars” of the infamous Twitter story about a stripping road trip gone terribly, terribly wrong to get at the truth. I’m really heartened to see that Zola and Jess, the major players in the story, are trying to use this story as a way to bring attention to sex trafficking in the United States.

Here’s our first look at Gal Gadot as Wonder Woman.