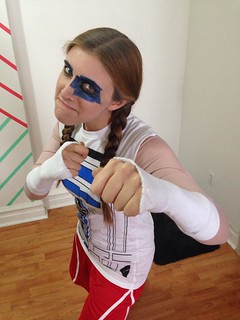 I hope everyone had a happy Halloween! I was boxing!R2D2, as inspired by that ripped R2D2 action figure picture set. I am now exhausted from a Halloween parade and watching The Addams Family, so forgive my brevity.

Renay and I’s Adventures in Xena continue with “Mortal Beloved.”

If SNL had a better track record of hiring Latino staffers, then perhaps there would be less controversy over Trump’s hosting stint. Or perhaps they would have thought harder about whether it made sense to bring him on the show at all.

Because it’s hard to imagine Michaels forcing star Kate McKinnon, who is gay, to perform alongside a guest host with a history of making bigoted statements about gay people. Or pushing black cast members like Kenan Thompson to yuk it up alongside a celebrity guest who had expressed bigotry about African-Americans.

You see, that’s the power of having real diversity on your staff or in your show. It makes you think more intentionally about things you should have been deliberately focused on in the first place.

Empire’s latest cover features Suicide Squad character covers, which includes Jared Leto’s Joker. And apparently Harley Quinn will be in a love triangle in the film—whose third corner is not, of course, on-again, off-again girlfriend Poison Ivy, but with Deadshot. Uggggh. I’m not happy about this movie, but I am happy that hardcore pop-punk tween from 2005 found that wish-granting unicorn. She must be so happy.

Aziz Ansari is promoting his new Netflix show Master of None, and he’s been talking about the struggles of minority actors—namely, what do you do when the only roles out there are stereotypes?

Jem Vs. Pranceatron is an old-school database of the Jem and the Holograms franchise that I revisit every time I scratch that beautifully 80s glam itch. Kiss your productivity goodbye and join me in yearning for the Integrity Toys that I will never be able to afford (on the secondhand market).

Dame Diana Rigg, who is never, ever wrong, says that a lady Bond would be great—as long as she was gay, so that the Bond girls would remain in the picture. Yes, good, let’s do this.

Rihanna is joining the cast of Luc Besson’s sci-fi film Valérian and the City of a Thousand Planets. Yes, good.

The most recent Captain Underpants book reveals, in a time travel sequence, that protagonist Harold grows up to marry another man and have children. So a public school district in Michigan has banned it, saying that parents need to decide whether or not it’s alright for their kids to see… a family like they would see on Modern Family or out in the world or in their own home? Ugh, I just so despise this, because what about little queer kids who might need a role model or even just some normalization? This line of thinking ignores that little queer kids exist, so this basically tells them that other kids have to be protected from them. And that is beyond cruel!

Beyoncé attended Ciara’s birthday party dressed as Storm and everything is right in the world for one beautiful moment.

This Racked article on sports bra design is really fascinating.

At The Nation, Dani McClain talks about long-acting reversible contraception and its troubled politics for low-income women of color.

At The Atlantic, Spencer Kornhaber asks why television still persists in using bisexuality as a way to denote morally dubious characters.

The Disaster Artist, that book about the production of The Room, is being turned into a movie, and James Franco will be both directing and playing Tommy Wiseau. That… makes complete sense.

BD Wong is joining Gotham as Dr. Hugo Strange (not to be confused with Marvel’s Dr. Stephen Strange).

Cosplay group Skirts and Swords tackled the uh-mazing Rey Arzeno Jem and the Holograms/X-Men mash-up and it looks truly outrageous. This is all of my interests. I own a poster print of that artwork. Arzeno signed it for me. I AM ALL ABOUT THIS.

Sandra Bullock is headlining a genderswapped Ocean’s Eleven film; basically, a heist film with eleven cool ladies. I’M IN. (Also, does this mean that genderswapped reboots are the new reboots? YES, PLEASE.)