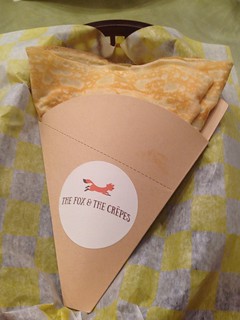 I bought Duran Duran’s Rio on vinyl this week at a flea market and didn’t have the heart to tell the guy I bought it from that I was just going to tape it to my wall of eighties records. (It was three bucks.)

My Lady Business for this week: I had a Nerd Adventure at a Pacific Rim screening featuring one of the film’s special effects supervisors and We Want It!.

Strange Horizons’ fund drive ended this week, and it’s been successful enough that we can raise the pay rates!

One World Symphony’s “operasodes”, short operas inspired by pop culture, is tackling Hannibal this evening. I look forward to reports.

This is how the Dogist does his work.

At The Mary Sue, Jessica Sirkin shares her frustration with how Oracle became Batgirl again—in a way that erased DC’s most visible superhero with a disability:

I love Batgirl, but there have been lots of Batgirls. Cassandra Caine. Stephanie Brown. There’s only one Barbara Gordon and only one Oracle. In correcting its mistake with The Killing Joke, DC also took away the independence of one of its strong women and its one superhero with a physical disability.

Cleolinda Jones has finished livetweeting Twilight: Life and Death. You can find the Storify links here. No one will be admitted during the uproarious ending.

The final Star Wars: The Force Awakens trailer is GO. HAVE EVERY FEELING! io9 has your shot-by-shot breakdown.

Vanity Fair editor Graydon Carter said that Donald Trump had short fingers once. To this day, Trump sends him photos with his hands circled in gold Sharpie to prove this wrong. This man is running for president.

The always wonderful Aliette de Bodard on stories that don’t get told.

The amazing Jess Plummer takes superhero film and television to task over how female anger is so often suppressed in them:

Women’s anger isn’t pretty or useful to men. It prevents them from cheering their male superhero on from the peanut gallery; it makes them unattainable in a way that’s not because the hero is being admirably noble. Also, it makes their faces go all scrunchy, and we can’t have that; never forget Jessica Alba being told to “cry pretty” on the set of Rise of the Silver Surfer, or, more recently, Joss Whedon telling Elizabeth Olsen to keep her face calm during Age of Ultron’s fight scenes because an angry, combative face was unattractive.

There’s a reason women love Agent Carter, a show powered by a subtextual engine of Peggy’s grief, frustration, and rage. There’s a reason Laurel Lance never clicked as a character until her largely incoherent but still deeply satisfying Season 2 rage spiral; life has done her wrong, and she’s finally, finally hitting back. There’s a reason so many readers are proudly labeling themselves non-compliant. We so rarely get to see our own anger reflected in mass media, and when we do, it’s deeply cathartic.

Here’s an interview with the fellas that did the titles for Crimson Peak!

Angelic being Jasika Nicole stops by Autostraddle to talk about making her own clothes and how it’s changed her life. I really love how she points out that clothes should fit the body, not the body to the clothes. The latter dominates mainstream thinking, to the point that “muffin top”—a phenomenon that happens when the waist of your bottom garment doesn’t fit—is considered “treatable” with exercise, because a living, breathing body must fit the dictates of a piece of clothing tailored to cover as many bases as socially acceptable. Baaaaaaaaarf.

POUND THE ALARM: The Monster High movie (no longer a musical?) has a director. This is going to happen. I’m ready yet so unprepared, to quote Garbage.

Matthew J. X. Malady found an image of his late mother while relaxing in Google Maps. His reflections on this are very comforting, especially as I continue to process my childhood dog’s death.

Sesame Street is introducing an autistic character named Julia, who is being introduced alongside an initiative to educate kids on how to better interact with autistic peers. This is so great!

Pride and Prejudice and Zombies looks… really, really great. I really love the “I’d never trade my sword for a ring” / “You would for the right man” / “The right man wouldn’t ask” exchange. Is this actually going to be a wicked cool zombie movie that discusses gender well? I would love that.

The always great Sasheer Zamata, now the ACLU celebrity ambassador for women’s rights, has produced a video about recognizing privilege.

The eponymous child of Harry Potter and the Cursed Child is none other than Albus Severus. Well, with that name, he’s twice cursed, isn’t he?

Arthur Chu, the director of the recently released Jem and the Holograms, originally pitched it as a faithful adaptation of the show. This is infuriating, because a.) Christy Marx had been trying to do that for years and b.) that would have been a million times better.

Speaking of Christy Marx: The Front interviewed her for Off Hollywood. She talked about her work in comics and animation, her push for diversity in her work, and her frustrations with Hasbro owning the copyright to Jem and the Holograms (which is probably what mucked up her efforts to reboot the show).

A draft of Pauline Bynes’ famous map of Middle-Earth featuring annotations by Tolkien himself has surfaced.

“They Found Love, Then They Found Gender” is a very beautiful article about a queer couple falling in love. It’s also a very frustrating read, because one half, Jeannot, is genderqueer but has to professionally “commit” to a male gender in order to continue teaching. Their life together seems very lovely and loving (they host a big queer brunch for their community! I want to do that!), but I wish they didn’t have to compromise like that.

Films
Purchased: None
Added: The Last Witch Hunter (via io9), All of Me (via the AV Club)