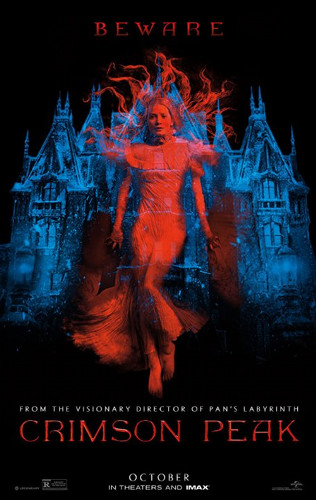 Selling Crimson Peak to modern audiences has proved difficult for Universal Pictures this weekend. Difficult to the tune of $26.3 million in domestic and international box offices, which is quite low. Competing against the much more accessible Bridge of Spies and The Martian, both currently in theaters, definitely doesn’t help.

How do you even effectively promote a classic Gothic romance to a marketplace unfamiliar with the genre? Universal’s solution has been to market Crimson Peak as pure horror, playing up the (damnable!) jump scares and atmosphere. And I don’t know if there’s a better solution, although I wish there was so that Guillermo Del Toro could, I dunno, make Pacific Rim 2 and Hellboy 3 with as much money as he needs. I just hope enough people take the gamble as is, because Crimson Peak is well worth it.

My exposure to Gothic romance has been limited to Mary Shelley, two-thirds of the Brontë sisters, and Austen’s supremely delightful skewering of the genre in Northanger Abbey. It’s from the latter that I have any real sense of the tropes inherent to the genre. And even that sense is a little muddled: I spent a lot of Crimson Peak banking on vampires. (I am not spoiling or ruining the film to let you know that no, there are no vampires. Just good old-fashioned wickedness.)

In this film, Del Toro takes the tropes and trappings of Gothic romance and infuses them with his uniquely lush and humanistic approach to filmmaking. This is not the kind of horror movie where you despair at the characters’ actions; everybody makes the best decisions with the information that they have. Edith Cushing’s explorations of Crimson Peak—or Allerdale Hall, to give it its proper name—always have a shape and purpose to them. Mr. Cushing, Edith’s beloved and loving father, doesn’t trust Thomas Sharpe (Tom Hiddleston)? He hires a man to look into his background discretely so he can know what’s going on. Everyone’s doing the best they can, and, when everything inevitably goes to hell, that makes it all the more heartwrenching.

As to be expected, Crimson Peak is absurdly and determinedly gorgeous, at a pitch so high that only Del Toro could reach it. Crimson Peak itself is a rambling ruin, with red clay oozing from the floorboards and over the walls, holes in the ceiling, secrets everywhere, somehow just as, if differently, intimidating during the day as at night. (I was delighted that the woman next to me at my screening giggle just as much whenever we learned something new about what terrible shape the house was in. Of course the water runs red with clay at first. Of course.) Edith wanders the film in a series of gold dresses and an iconic night gown by way of a fairy dress. Lucille Sharpe’s severe dresses are to die for, especially a sapphire and black number. In an interview with the Empire podcast, Del Toro mentioned wanting to physically build the sets—in order to accommodate the kinds of dolly and crane shots used in classic haunted house films—and that tactility speaks volumes. It actually makes the CGI more effective for me, since the CGI is largely limited to the ghosts that haunt Edith throughout her life.

Edith’s status as protagonist means that Crimson Peak is a female-centric film, especially when Lucille resolves into the main villain. It’s in the tradition of Gothic romances and a welcome respite, but this is where I run into my sticking point. I call it a sticking point rather than a problem, because it doesn’t stop me in my tracks or break the film. My sticky points with Del Toro’s work usually stem from genre carryover—things that get imported alongside elements integral to the formula of the genre he’s working in. In Pacific Rim, for instance, the protagonists’ jaeger is called Gipsy Danger. It’s a specific reference to an aircraft, but nonetheless the use of a slur.

In a similar but less problematic vein, Having Lucille become the main villain feels like an awkward artifact. Jessica Chastain’s performance is wonderfully incandescent with rage, so it’s not that. Rather, I’m curious as to why she becomes the main villain when Thomas is just as complicit. Having an academic relationship with Jane Eyre probably doesn’t help; I am inherently sympathetic to madwomen in attics. I can’t say much else without wandering into spoiler territory, but Lucille has emerged as the most fascinating character of the film for me. I just wish we’d spent a little more time with her.