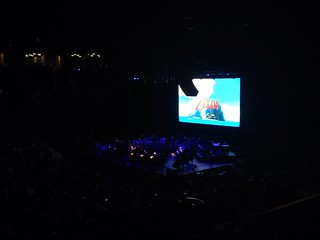 I went to The Legend of Zelda: Symphony of the Goddesses on Tuesday and cried my eyes out, as expected. It was so good. Here’s a taste of the concert from The Late Show with Stephen Colbert.

Renay and I’s Adventures in Xena continue with “Warrior… Princess.”

Gavia Baker-Whitelaw looks at Black Panther, afrofuturism, and what that might mean for the Marvel Cinematic Universe.

Anne Helen Petersen’s profile of John Wayne focuses on his position in American politics and the American myth.

I stopped watching Gotham because… I forgot about it… but I am delighted to see that Paul Reubens will be reprising his role as the Penguin’s dad on the show.

The Man Who Fell to Earth is being adapted into a musical called Lazarus, which is a collaboration between Enda Walsh and David Bowie himself. So, yeah, David Bowie musical, let’s do this.

A little girl in Columbus, Ohio, was punched so hard by a little boy that she needed stitches. And a hospital worker told her that the reason that little boy punched her must have been that he liked her. Her parents, thankfully, called this out because normalizing abuse as affection is awful, but it’s a horrible reminder of the culture we live in.

POUND THE ALARM: Warner Brothers is going to campaign for Mad Max: Fury Road to be considered for Best Picture.

While promoting Freeheld, Ellen Page has called out Matt Damon on his bs and intelligently discussed her own privilege in the queer community. She’s so great.

Mattel consulted with “feminists, bloggers, and academics” to design the DC Super Hero Girls dolls, which feature more athletic builds than some of their other lines. Good on you, Mattel! We need more body diversity in dolls.

So Pan bombed. Can we now just completely say that whitewashing is not a sound business strategy?

Author Meg Rosoff commented on a post that positively reviewed Myles E Johnson and Kendrick Daye’s Large Fears by complaining that kids don’t need representation and diversity because art is art and shouldn’t have an agenda. What. I feel weird about How I Live Now now.

Donald Trump is going to host Saturday Night Live. I’m baffled but getting my popcorn out just in case.

In an open letter for Lena Dunham’s newsletter, Jennifer Lawrence talks frankly about the wage gap, her struggles negotiating her salary and standing up for herself, and likability as a hinderance.

Reality television plays with reality to build its narrative, which makes it particularly ripe for exploitation when the narrative being presented is one we don’t see often enough. CJ, a trans man, was approached to appear on a documentary series called The T(estosterone) Diaries. He agreed, but watched as the show ending up becoming a sensationalist view of transitioning literally called Girls to Men.

Teresa Jusino’s “A Note to White, Straight, Cis, Able-Bodied Men,” written after she met such men at New York Comic-Con who expressed fear and guilt when it came to their own diverse projects, is a necessary reminder that we need to listen to one another. I think it’s a useful kick in the butt for anyone feeling weird about their privilege:

We need you to listen before you create.

Ashe at FemHype looks at how Final Fantasy X’s Tidus is a rebuttal to toxic masculinity.

Spider-Gwen has debuted, and it features a black female Captain America. I hope the creative team takes the opportunity to creatively play with and remix the Marvel universe, since this is an alternative universe.

Lucasfilm president Kathleen Kennedy has said that a woman will definitely direct a Star Wars film. She did not provide a timeline.

Thor: Ragnarok may feature Valkyrie… which might also, in turn, mean that Enchantress might show up. Although I am praying that she turns up in Dr. Strange to, I dunno, rip his beard off or something? I would be delighted to see her show up here, in my favorite corner of the Marvel Cinematic Universe. Also, the Hulk will be in Ragnarok, because WHY NOT.

DC’s cancelled Sensation Comics is being replaced with The Legends of Wonder Woman, a nine issue miniseries about Wonder Woman’s upbringing on Themiscyra.

GQ’s profile of Taylor Swift is really fascinating. I’ve been thinking a lot lately about Anne Hathaway Syndrome—how women are disliked for looking like they try too much, because ambition is apparently gross in women—and I wonder how Swift plays into that.

Ovid at Myths Retold explains what chivalry actually is (and it’s not holding the door open passive-aggressively):

Chivalry boils down to three things: mercy, charity, and humility. Mercy means being conscious of your advantages, and treating other humans gently. Charity means giving without expecting anything in return. Humility means accepting your mistakes, and recognizing that those who don’t have your advantages aren’t your inferiors. Anybody can embody these traits – woman, man, or even horse. At this point, you may be thinking “hey, this is bullshit, these are just basic guidelines for not being an asshole!” and congratulations, you’re right. That’s all chivalry is: basic guidelines for how not to be a sack of shit. And as long as a sack of shit is not a good thing to be, chivalry will never die.

I have become obsessed with my new Uniball Signo UM-151 0.28 mm pen; I’ve used Uniball Signos for years, but I always bought the 0.7 mm ones you can get at most office supply stores in America. But there’s a Japanese stationery store here in New York where you can buy the tinier ones meant for writing in kanji, and my handwriting looks amazing. So here’s an article about how awesome they are that Kikokuniya actually posts in the store next to the pens.

Books
Purchased: None
Added: Carry On by Rainbow Rowell (via Renay), Jem and the Holograms, Vol. 1: Showtime by Kelly Thompson and Sophie Campbell (via The Mary Sue)