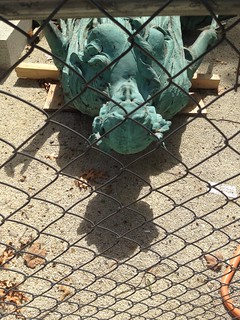 New York City just took a hard left into fall, so it is cold and I am sick, apparently with whatever Fran Walsh had when she put down the track for the Nazgul scream. On the plus side, I have a review backlog to power through and caught up on Sailor Moon Super S. How did these animals absorb so much toxic masculinity so quickly?

Renay and I continue our Adventures in Xena with “A Fistful of Dinars.”

Lady Business also posted its long in the making Gender Discrimination in SFF Awards post by Ira, Renay, and owlmoose, so go check that out.

This New York Times article about being purposeful with technology does skew a little more “THOSE DARN MILLENNIALS” than I prefer, but I am intrigued by the concept of actively trying to be alone with your thoughts in an environment where it’s so easy not to be. I did try to go on a walk with naught but my thoughts this week, but I was suffering from the aforementioned Nazgul flu, so I arrived back at the office as if I’d teleported there.

“Whether you’re straight or gay, people shouldn’t know anything about your sexuality because that’s one of the mysteries that you should be able to play,” says Matt Damon. I find this stunning display of straight privilege especially hypocritical coming from an actor who is openly married and heterosexual.

Marcy Cook at The Mary Sue breaks down how to end harassment in the comics industry.

Judy Berman at Flavorwire looks at how The Rocky Horror Picture Show has evolved over the years, from a radical and much-needed space to something more commodified in a marginally more queer-friendly world.

Vulture asked 37 female comedians if they’d consider hosting a late night television show. It’s pretty fluffy, but there are some great answers—from Sara Schaefer pointing out that she’s already done that to Cameron Esposito describing her own show as “action movie karaoke.”

Meredith Talusan shares how street harassment taught her what womanhood in our culture was after transitioning.

Stonewall tanked at the box office, because everyone it was marketed to recognized that it was some whitewashing and ciswashing shenanigans. The queer cabal (the quabal, if you will) has succeeded!

Carly Rae Jepsen as Frenchie in Fox’s live musical version of Grease? What do you want from me, Fox, because that is a very good bargaining chip.

Peeple, an upcoming app described as Yelp for people, sounds like a nightmare that could only have been concocted by people marinating in privilege. Start with the fact that people can put you on the app by using your phone number and end with the fact that you have to contest poor reviews of yourself—like, I dunno, someone harassing you or an abusive ex or any number of humans you might not want to ever meet again for any reason. Feministing has a full rundown of why it’s such a terrible idea.

The founders of Peeple seem convinced that having people use their real names on the site will keep them from being terrible to each other, so here’s Kat Blaque sharing the story of a man who repeatedly harassed and threatened her on her Facebook page—using a Facebook profile with his real name and his real employment information publicly available. He gets totally fired, because threatening to kill and rape a woman goes against his employer’s code of ethics.

The Umpqua Community College shooting is horrifying. It’s America’s 34th school shooting since Sandy Hook in 2012. My only response, other than deep sympathy for the survivors and the families of those who were murdered, is pointing to Mother Jones’ list debunking common pro-gun myths.

Guillermo Del Toro said on Twitter that if Pacific Rim 2 is go, Maisie Williams is getting a Jaeger. YES PLEASE.

Films
Purchased: None
Added: Eating Raoul (via the AV Club)