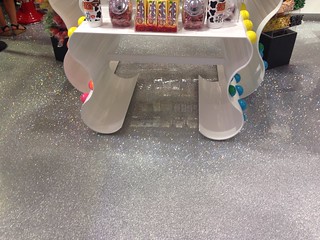 I want to live in a house with sparkle floors.

DAVID CAMERON PORKED A PIG. That was quite a way to start the week.

Ernie Hudson will cameo in Ghostbusters, which means that all of the surviving original Ghostbusters have done so. Huzzah!

John Landis has said that the theatrical cuts of the original Star Wars trilogy will be released on DVD sometime soon. YES, PLEASE.

The Clarion Foundation received a gift of $100,000 explicitly to secure the future of the Clarion Science Fiction and Fantasy Writers’ Workshop. What great news!

Malinda Lo has just revealed that she is a part of Tremontaine, “a serialized, digital, fantasy series” that’s a prequel to Ellen Kushner’s Swordspoint. It’s composed of thirteen novellas (it’s meant to be structured like television) that are available as both ebooks and audiobooks. I think it’s the first model of making books more like television that I’ve heard of that I thought would work. It launches October 28th.

Aliette de Bodard earns my UNDYING LOVE for talking about how unbelievable it is for characters to not be influenced by systemic oppression (in either direction, but especially the privileged) in speculative fiction.

Cathrynne M. Valente is going on tour to promote her new book, Radiance. Is she coming anywhere near you?

The German theme song for Sailor Moon is great. You will pry my nineties European house dance music out of my cold, dead hands.

Roland Emmerich’s whitewashed rendition of Stonewall is, unsurprisingly, awful. Richard Lawson at Vanity Fair rips it a new one. Rich Juzwiak at Gawker eviscerates it.

Here’s how the Stonewall riots really went down, by the way, in the words and pictures of Mike Funk.

Promotion for Suffragette is starting to get heavier, so here’s a good reminder that Indian and black British feminists were also involved in British women’s suffrage.

A trans woman was detained and humiliated at the Orlando airport because the security staff had insufficient training to deal with transgendered passengers. INFURIATING.

Ta-Nehisi Coates is writing a Black Panther series! If you are so inclined, I encourage you to preorder the series from your local comic book shop to send the strongest signal to Marvel that THIS IS THE BEST THING EVER. If you are not excited enough, here’s Coates on comics.

Rose McGowan’s first single, “RM486” (which heavily features iconic lines from Blade Runner), also comes with a gorgeous music video. Her interview at Nowness goes further into the song, McGowan’s struggles with Hollywood as a female artist, and what she’s trying to do. I love McGowan to pieces and I’m so glad that she’s doing this.

Holy crow, this Volvagia cosplay is incredible. But the process of how it was made is even more incredible, because it hits everything I love—Ocarina of Time (obviously), loving minor characters, trying to visualize in reality a character with limited references, and ingenious shortcuts for maximum results.

Kesha’s career is at a standstill right now… because she took legal action against her producer last October, who she is accusing of “sexually, physically, verbally and emotionally” abusing her over the course of their decade-long professional relationship. The legal battle has been ongoing since then, but movement in the case last Friday led to the Twitter hashtag #FreedomforKesha. I don’t care if you like her work or not: this is heinous. The fact that Kesha is being economically punished for speaking out against her abuser is awful.

World of Warcraft has introduced tokens into the game’s economy, letting players buy in-game gold with money. I’ve always like freemium models for MMOs—I used to start and stop on Achaea in high school. But World of Warcraft’s size means that this is a shift in a major economy, and that has some interesting implications, laid out here by Samantha Nelson.

Emmy Park at Racked looks at the rise of Instagram-famous dogs with a surprising amount of compassion. Personally, I’m always a little uncomfortable with Instagram accounts where owners make their small dogs perform human luxury unironically, but, then again, that’s been the whole point of toy dogs since the medieval era. CARRY ON.

Arabelle Sicardi at Refinery29 looks at the role beauty plays in the lives of trans women—most often and devastatingly, it operates as a means of survival. Reading this made me gnash my teeth.

Marian Bull at Racked looks at how Essie nail polish has taken over salons. As a nail polish freak, I’ve never really had any interest in Essie—I like really bright and really weird colors, like school bus yellow and puke seafoam. But Bull points out what Essie’s appeal is: it’s nail polish for women whose pleasure in nail polish is focusing on the manicure as grooming ritual, not artistic expression.

How have I not heard of Momentum, a spy thriller starring Olga Kurylenko? It comes out October 16th, which is practically now. I hope it’s awesome.

Here’s Anne Helen Petersen on Anne Hathaway Syndrome—i.e., the syndrome where people dislike Hathaway because it seems like she tries too hard. I don’t suffer from this myself (partly because I love Hathaway and partly because she looks enough like Liv Tyler that my lizard brain gets confused and swears fealty to her just in case), but this is a really good case of examining why you dislike someone to discern deeper, more troubling cultural patterns. Doesn’t mean you dislike them any less, just means that you see the wiring encouraging you not to.

POUND THE ALARM: Sigourney Weaver is in Ghostbusters!

I haven’t watched any That Guy with the Glasses-related material in a long time (…a long time), but I found this while cackling at Stonewall reviews. Kyle Kallgren, whose show Brows Held High reviews, obviously, highbrow films, tackles Anonymous. Sure, the film is deliriously bad—so, uh, don’t watch if you don’t want to be spoiled for that—but Kallgren’s analysis touches on what Shakespeare means to us, Barthesian theory, and the idea that Shakespeare is universal because we have very little idea of who he was. I’ve been chewing on that all week.

You can listen to Sam Smith’s new Bond song, “Writing on the Wall,” here! It sounds… well, it sounds like Sam Smith doing a Bond song, quite frankly, so it’s pretty predictable. However, nobody is really talking about the fact that it’s written from Bond’s perspective, something the Bond songs have never done. (“But ‘Skyfall’!”, you might say, and I will tell you that “Skyfall” is sung by his dead wife before locking myself in my room to have a cry.)

Hopes and Fears talked to several television writers about their most recent project’s writers’ room. Nick Antosca talks about Hannibal and the art of adaptation.

Books
Purchased: None
Added: The Scorpion Rules by Erin Bow (via Jenny), The House of Shattered Wings by Aliette de Bodard (via Tor.com), Nails by Suzanne E. Shapiro (via Racked), The Princess and the Dressmaker by Jen Wang (via Renay)