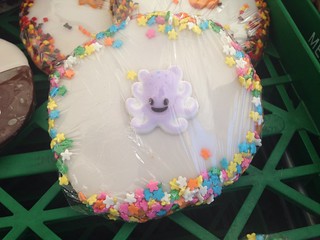 I was over at Lady Business this week for another episode of Xena: Warrior Princess, “Athens City Academy of the Performing Bards.” I JUST GOT THAT PUN.

Also, Strange Horizons, for whom I am a first reader, is having their 2015 Fund Drive! You can donate through PayPal, Network for Good, or our fancy new Patreon. Support diverse sf!

Rebecca Lucy Busker’s article on LiveJournal and fannish discourse posits that LiveJournal may have encouraged multifannish behavior. Of course, this appears to have been written before tumblr ate fandom, but I think it’s a fascinating idea.

Akiko Hori’s article on yaoi and antigay discrimination is also fascinating, because it tackles the intersection between yaoi as a safe space for straight women and how that might play into objectifying or even ignoring the queer men they fantasize about. And also shows that people have been debating this ever since I was just a little potato baby.

Rachel McAdams is going to be in Doctor Strange. STOP CASTING PEOPLE I LOVE MOVIE. (I mean, please, give them work, but also don’t whitewash characters, thanks, kay, bye.)

Vanity Fair’s recent article on late night television gathered the late night hosts together in one room for a photo shoot—which conveniently showed how white (although not all white) and male the late night landscape is. I am also furious about how boring all of these suits are (except for Stephen Colbert, because his stylist knows what they are doing), but I recognize this is besides the point. Samantha Bee responded perfectly with a photoshopped centaur version of herself firing lasers from her equine eyes.

At The A.V. Club, Caroline Siede explains how feminist critique of a text doesn’t mean damning the entire text by using Ewoks as an analogy.

Super Mario Bros. is thirty years old this week, and John Teti’s thoughtful piece on how Mario’s first adventure was an incredibly lonely one made me feel actual emotion for the plumber. Well done.

Historian Deirdre Clemente explains why Americans dress so casually. I found this fascinating, largely because this very week I had another meltdown about the sloppy menswear I see just walking around in a big city.

“The first draft is always perfect, because all it needs to do is exist.” I need to embroider this on something.

The Book Smugglers want your novella for their latest awesome publishing initiative!

NBC wants to reboot mystery series Hart to Hart with a gay couple at the center. YES, PLEASE.

Fourteen year old engineer Ahmed Mohamed brought a clock he built into school to show his teacher—who called the cops on him for making a “bomb.” The situation is an infuriating reminder of the awful Islamaphobia that runs rampant through the United States. There is a silver lining to this story: Mohamed has gotten a lot of support from leaders in his industry of choice and from the President himself, who invited him to bring his clock to the White House. And he’s not going back to that high school.

Pacific Rim 2’s production has been halted indefinitely. …I can’t deal with this. Guillermo Del Toro has, however, stated that important production things are due in three weeks, so there’s still hope.

Kyle Buchanan rips through three films with queer content—Freeheld, The Danish Girl, and About Ray—that are, somehow, all about straight, cisgendered characters. “…if these movies are being made because the queer and trans characters are so fascinating, let’s keep those characters at the center, where they belong.”

Aditya Mukerjee writes about the linguistic imperialism of the Unicode Consortium in the tellingly titled “I Can Text You A Pile of Poo, But I Can’t Write My Name.”

Our Lady of Celebrity Gossip Anne Helen Petersen looks at the future and past of Tiger Beat.

The Tomb Raider film reboot is looking for a lady director.

Aaron Bady at Pacific Standard looks into the nostalgic for racism problems of Taylor Swift’s video for “Wildest Dreams.” And by looks, I mean splits to the bone.

Linked in that Bady piece: Binyavanga Wainaina’s bitter satire of how white authors write about Africa.

Adrian Chen’s 2012 article on fans of the Aurora shooter is, as you can imagine, horrifying, but also proposes that fandom is now majorly focused on fandom itself, instead of individual fans defining themselves by being a fan of a source text, due to all the crossover inherent with using platforms like tumblr.

The A.V. Club’s Oliver Sava uses a review of Agent Carter #1 to talk about the uphill battle that is diversity in the comic book industry. Searing.

Fret not, my fellow Americans—we will be getting Star Wars: The Force Awakens on December 17th, like the UK and France, because the earliest screenings will be 7 PM on December 17th. I did a 7 PM Thursday screening for The Avengers: Age of Ultron, which I really enjoyed, because it lets people who can’t do the midnight premiere for various reasons still enjoy that first night audience magic.

Vogue’s adorable gimmicky 73 Questions series interviewed Victoria Beckham in January. It’s as airy and lifestyle porn-y as you might expect from Vogue, but Beckham, who is tragically underappreciated for her wit (she won Spice World), does get in a glorious jab when she’s asked why she never smiles. “What’s your favorite spice?” “Posh.”

Monica Bellucci has called herself a Bond woman instead of a Bond girl, because she’s fifty. Of course and about time. (And if Spectre doesn’t punch Bond’s mommy issues in the gut, I will be very, very surprised.)

Yvonne at Autostraddle talks about Taco Tuesday and cultural appropriation. She includes a lot of great guidelines on how to enjoy a culture’s food without exploiting that culture.

There’s a rumor that there might be a Blue Beetle and Booster Gold buddy comedy from the minds behind DC’s television shows. It’s just a rumor, but any levity from DC Studios at this point is welcome.

Books
Purchased: None
Added: The Beautiful Fall by Alicia Drake (via public transportation)