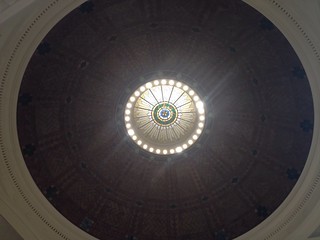 I don’t know where it came from, but I have had a reading surge over the last few days. I blasted through Kushiel’s Chosen, Ms. Marvel: Volume 1 (with a French kid reading approvingly over his father’s shoulder on the subway), and the first two hundred pages of Crazy Rich Asians. I hope it lasts!

Jessica Kiang reviews The Danish Girl at the Venice Film Festival. I’m linking this because she touches on how soft and pandering the film is to non-trans audiences who have never dealt with trans people before. Kiang argues that this will be helpful. I think it will be, ideally, helpful in some ways. But I really want this film to ignite a big conversation about respectability politics that points out the weaknesses of pandering to audiences (case in point: any help this film will be will be hindered by the fact that it cast a cisgendered man as a transgendered woman).

Sam Smith has officially recorded the theme song for SPECTRE, “Writing’s On the Wall.” He’s the first male solo act to do a Bond song since, I think, Tom Jones, so well done there.

Gavia Baker-Whitelaw talks about the original The Man From U.N.C.L.E. fandom at the Daily Dot.

An amazing Imperator Furiosa cosplayer at Dragon*Con last weekend had a working prosthetic arm. Here’s how it was made.

Marvel’s Red Wolf will be getting his own title for the first time since the seventies, and the creative team for the title includes a Native artist (S’Klallam Tribe) on the covers! I hope this trend of more diverse creative teams at Marvel gets bigger.

Janelle Monáe, one of CoverGirl’s current faces (and the Electric Lady herself), sports the “Resistance Pilot” look for their Star Wars line. I haven’t seen any of this line in stores, which is terrible, because I’m almost out of mascara and have determined to get nerd mascara. Also: please put Janelle Monáe in a Star Wars movie.

This is a pug in sunglasses and a hoodie playing the drums to Metallica’s “Enter Sandman.” This is all you require.

Ronda Rousey will be starring in a remake of Roadhouse. I humbly submit that you do not change the script one whit, because the only way to improve on the original Roadhouse is to have a lady Dalton. (If “pain don’t hurt” isn’t a line in the remake, I will flip a table.)

Marvel has announced Patsy Walker (aka Hellcat), a new comic written by Kate Leth with art by Brittney Williams (!!!). This one posits her romance comics past as something her mom wrote, and, while I prefer the situation where Patsy gets everything she wanted and then realizes she’d rather be a superhero, I think that’s a great twist.

So… how about that lady who lives in that elaborate Victorian roleplay, eh? Historian Angus Johnston looks into the books she’s written on the subject and, surprise, she’s antifeminist and a little racist. And Rebecca Onion at Slate pokes holes in the concept of being able to access the mental landscape of the Victorians.

Nintendo’s first iOS game will be Pokémon GO and nobody will ever get anything done ever again. Get everything you need done before next year.

This profile of Steve Whitmore—the man who succeeded Jim Henson as Kermit after Henson’s death—is a really fascinating look into the small world of puppetry.

Nathan Altice talks about Super Mario Bros’ design and legacy. It’s a little more technical, but it is fascinating to learn about how Nintendo maximized 40KB (!!!) of space to the point that the game is perfectly capable of generating levels on its own.

Jenny Zhang annihilates the idea that diverse authors have an easier time of getting published in the wake of Michael Derrick Hudson using a purposefully Asian pseudonym to get a single poem published. The piece is practically smoking, it’s that astonishing.

“Down and Out in the Magic Kingdom” is an expose on Disney’s internship program, which has evolved into a behemoth that uses college students paid minimum wage to staff a surprising percentage of the parks.

Jam of the Week: White Town’s “Your Woman.”