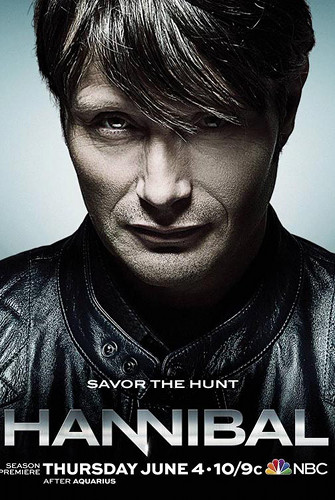 Hannibal: Season 3
based on Red Dragon by Thomas Harris

It only really occurred to me on Sunday that I have spent this entire summer drowning in Hannibal. Despite declaring that binge watching was just not the way I, personally, should be consuming television, Hannibal’s circumstances and quality endeavored to make a hypocrite of me and succeeded. My appetite for Hannibal was insatiable; forty-five minutes never went so fast in my life before.

Now that I’ve returned to my other television projects (Sailor Moon and Xena: Warrior Princess, for the curious), it almost feels like I’ve just wandered, dazed, out of a dark forest and, looking back, have only just now realized how vast it was. When it comes to television, I am well-trained in the art of being completely out of the loop when it comes to television: see previous sentence, where I have somehow managed to grow to full adulthood as a queer lady geek without the power of Sailor Moon and Xena: Warrior Princess. So the experience of not only being in the loop but being in the loop with a show that has radically challenged what network television and television can do has felt like a rare honor.

Now, with the benefit of about a week of hindsight (I was still wailing into the floorboards on Monday, so, uh, no post then), I can see that transformation has been at the core of Hannibal, both the story itself and the way that story is told.

Season 3 continues that trend with gleeful aplomb. It’s astonishing and yet perfectly logical that we ended up here from the first season’s haunting, empathetic riff on procedurals. Already a show with short seasons (which, and I think few people would disagree with me, meant that there were practically nothing but hits), Fuller and company splits the third season in two—season 3a and 3b, or, because this is not Teen Wolf, Italy and the Red Dragon. The Italian arc is languid and more dreamlike than usual, reveling in Old World opulence and the quiet mutterings of Hannibal and Bedelia’s dance for psychological power (or, in her case, survival). We dip briefly into Hannibal’s childhood, but that well is, blissfully, dry: Fuller utterly disregards Hannibal Rising. The Red Dragon arc, the first major Harris story Hannibal has attempted to directly adapt, is set on the stage of the emotional hellscape that is the fallout of Hannibal’s machinations. Everyone has had three years to scrape themselves together and evolve, before falling back into destructive but seductive patterns or coming face to face with the compromises they had to make to survive.

While locking up Hannibal unfortunately means the cessation of both a steady stream of Baltimore’s artiest serial killers and fine cooking, Fuller finds other avenues for dark comedy, pitch-black romanticism, and surreal, emotionally logical visuals. Hannibal folds a corpse into a heart and lives it behind as a token for Will. Alanna and Margot have sex, seemingly shot through a kaleidoscope that both obscures and obscenes. The Red Dragon, Francis Dolarhyde, describes in emotional detail a sedated tiger to his blind lover, Reba, as it glows a lurid orange that seems to stain her seeking fingertips.

I keep trying to look back to see where the added pieces join to what came before and not really being able to find the seams—the show is just that well put together. Joe Anderson takes over the role of Mason Verger with a perverse, infectious zest (easier to, uh, digest, as Verger’s zippy facial reconstruction surgery leaves him barely recognizable) that only seems to expand as the Italian arc gets weirder and weirder. Nina Arianda makes the most out of Molly Graham’s limited screen time, including a tense and brilliantly plotted home invasion sequence. Richard Armitage is, as could be predicted, astonishing as Francis Dolarhyde. But Rutina Wesley, as Reba, is incredible. Her Reba is so accessible but also so strong in unexpected ways, and her chemistry with Armitage is so palpable that you may find yourself rooting for a serial killer and the woman he loves to really make it, although, of course, they can’t.

To go further will take you into spoiler territory, my sweet, and I want you to experience Hannibal like I did—not in one aggravated gulp, specifically, but freshly. The turns the show takes—whoever thought that Frederick “Worst Slytherin Ever” Chilton would end up becoming the most sympathetic character on the show?—deserve to be experienced that way. It’s such a rich and dense show that the inevitable rewatch will be deeply rewarded. Every detail is so well considered that I feel like I’m leaving great swathes of the show out by not mentioning them, but let’s frame that as treasure hunt instead of omission.

With Hannibal concluded for now—and what a conclusion, sung to its rest by Siouxsie Sioux’s first single in years—all I particularly want to do is look back and marvel at it. It’s amazing that Fuller got this far, really, and it’s a testament to his dedication to his artistic vision that Hannibal happened exactly the way it did. It bodes good things for Fuller’s upcoming adaptation of American Gods and for whatever form Hannibal will take further down the road. It’s a stroke of luck and genius that now feels utterly fundamental. What a good show.

(Now, back to wailing into the floorboards to The Hazards of Love.)

I watched this show on Hulu.