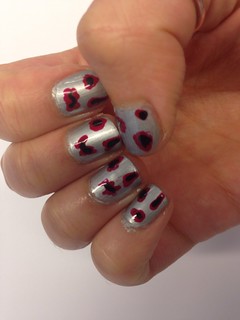 Everything is the Hannibal finale, so my heart is on fire but also light. I did finish Alexandre Dumas’ Georges yesterday, which I was quite happy with.

Nintendo is considering getting back into the movie business. SADDLE YOUR ZELDA SPEC SCRIPTS! Actually, of all the big Nintendo IPs, The Legend of Zelda and Metroid will probably lend themselves best to cinematic efforts, and those franchises heavily feature female characters. Call me, Nintendo! I was born to play the Poe Collector.

Shannon Keating, Sarah Karlan, Brittani Nichols, and Ellen Cushing convene at Buzzfeed to discuss why movies about queer women are usually not so good.

FlameCon will return next summer for a whole two days! I already have my tickets and am already wondering if covering up my eyebrows will be enough of a deal-breaker to stop me from doing a Hannibal costume.

Melissa McCarthy shared a photo of all the women involved in the production of Ghostbusters. It is so great to see how many amazing women are involved, especially in behind-the-camera roles.

Alison Bechdel has asked that the Bechdel test be called the Bechdel-Wallace test, to properly credit the woman who came up with it in the first place. Got it?

This Onion article is really the only response I can have to gun violence in the United States.

“Darth Punk: The Funk Awakens” is a fun, retro, and Star Wars-themed video that looks basically like the inside of my head at night.

Pierce Brosnan thinks a black Bond can happen soon, but that a gay Bond won’t.

Jennifer Lawrence and Amy Schumer are writing a comedy together. Yes, good.

Abby Norman at The Mary Sue explains parasocial relationships—i.e., why we will go to the mat for KStew despite not knowing her—and how celebrity adoration changes in the context of the Internet.

Megan Kate Nelson talks about why she was able to leave academia (money) and why it’s a huge problem that academia often ignores finances in favor of prestige.

Miya Tokumitsu at Jacobin destroys the concept of “Do what you love!”.

I am kind of psyched for Lady Gaga in American Horror Story: Hotel (a show I do not watch), because she gets to be a well-dressed vampire rattling around an Art Deco hotel. HAVE SOME PICTURES.

E. Jean Carroll’s 2002 true crime essay about a small town plagued with murders in the late nineties is a fascinating and respectful read.

Evan Osnos at The New Yorker explores Donald Trump’s appeal to ultra-conservatives. What a nightmare.

Katherine Cross at Feministing talks about the shaming involved in the Ashley Madison hacks, and rightfully points out that we should be very worried that the tactics used in that hack are the same tactics used to harass average Janes on the Internet.

Pilot Viruet looks at a recent episode of the sitcom The Carmichaels that talks about police brutality and how gallows humor operates in oppressed communities.

Star Wars released a very short promo clip on their Instagram account this week (what a world we live in!) that shows Finn using a lightsaber (rumored to Luke’s original lightsaber) against Kylo Ren, known owner of the world’s dumbest lightsaber.

The most important thing I’ve read this week is this epic, month-long MetaFilter thread about emotional labor: what it is, how it’s done, how we’re socialized to believe it is an inherently female thing (spoiler alert: it’s not), how it’s denigrated, and how it is the basis of all human civilization. I have learned so much from this thread. It has changed the way I see the world. It is a very long read—it took me two and a half days—but I think it’s worth it. Important links stemming from this:

DC might be pulling back from DCYou, its big twenty title strong push for diversity. The always amazing Jess Plummer tells us why she hopes that isn’t true.

Jeb Bush pulled out the term “anchor babies” (ugh, really?) and then doubled down by saying he was talking about Asian immigrants, not Mexican immigrants. What the what. Code Switch rounds up the best responses, but I’m starting to be uncomfortably aware that some conservatives in America are terrified of a country where whites are not the majority. What a weird thing to be afraid of.

Candis Cayne recalls the time she went into a Curb Your Enthusiasm audition and had to explain why the scene she was reading for was transphobic. I am so glad she’s got a recurring role where she doesn’t have to deal with that nowadays, and I really hope that other trans actresses and actors won’t have to put up with parts like that to survive in the future.

Alexandra Robbins at Marie Claire explores the role of sororities in increased incidents of sexual assault on campuses. It’s, obviously, incredibly depressing to read about women covering up or ignoring their sisters’ sexual assaults, but it really highlights a lot of problems in the Greek system and how centered it is on appeasing men no matter the costs. (I am suddenly extra grateful for my college experience at an itty bitty women’s college.)

Jam of the week: Madonna’s performance of “Vogue” at the 1990 MTV Movie Awards. I remember someone involved in Rock of Ages talking about how they found the sound of lucite heels’ clicking so fascinating that they ended up incorporating them into the music, and the fans do much the same here. And Madonna is supposedly wearing Glenn Close’s costume from Dangerous Liaisons. Fabulous.

Entertainment Weekly runs down everything Hannibal (and other characters) wore on Hannibal. This is the only Hannibal thing I can link to for this post, because I am watching the finale right now (or, if you’re reading this in the afternoon, I have watched it and am now howling into the floorboards.)

Films
Purchased: None
Added: When Animals Dream (via the AV Club)