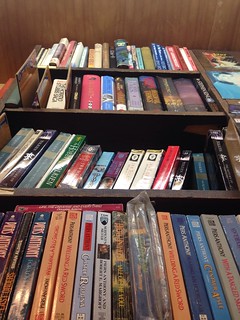 I bought pumpkin-shaped peppermint patties today, so let it ring out through the land: summer is at an end! We need to start brainstorming our Halloween costumes stat.

I saw Man from U.N.C.L.E. on Friday, which I honestly very much enjoyed—but we’ll talk more about that tomorrow. Or next Friday. Whichever I manage.

The idea that trigger warnings on class materials is proof that political correctness is killing intellectual discourse is absurd: Aaron R. Hanlon at The New Republic explains why, if you need an explanation.

Star Wars: Rogue One has added Alan Tudyk and Mads Mikkelsen to its cast. Tudyk will be doing some kind of motion capture role—which plays to his strengths—and I, of course, assume that Mikkelsen is playing the villain from whom Felicity Jones and her crew are stealing the plans. (Although Mikkelsen as a grizzled weird Jedi would be amazing, because I need more Bad Idea Jedis in my life.)

Kevin Wong’s rundown of how Snoopy’s evolution changed Peanuts for the existentially flatter is really fascinating.

The Drew Struzan poster for Star Wars: The Force Awakens is out and it looks amazing. Rey looks amazing and Finn will become a Jedi. I AM ALL OVER THIS.

Foz Meadows finally made it through Ivanhoe and proposes a way to look at how well female characters are written:

Here is what I took away from Scott’s treatment of these women: Rowena, passive and set on a pedestal, is what he thought women should be, while Rebecca, active and human, is what he grudgingly acknowledged women were; or could be, at the very least, if they actively tried to overcome the handicap of their gender.

And thus the question I ask myself, when examining female characters on the page or screen: is this woman a Rowena, or a Rebecca? Meaning: has she been written as an ideal, so defined by what the author wants her to do – usually for a man’s benefit, or to benefit his narrative (which classification, I hasten to point out, applies equally to female villains, who benefit the hero’s narrative by being Evil Because Cartoonish Misandry And/Or Incompetence) that she doesn’t come across as an actual human being? Or has she been written as a person, comprehensive and flawed and possessed of agency, even or especially if it makes her seem unlikeable or imperfect?

Rebecca Jordan-Young explains how something that is constructed is still, nonetheless, real, as she explains some gender theory basics.

Fans are theorizing that Jared Leto’s Joker in Suicide Squad is, in fact, the Robin Batman has previously lost in Batman V. Superman: Grimdark Grimdark Grimdark. Signs are starting to really point to yes. Man, these are going to not be fun movies, are they?

The trailer for Carol has landed. It’s a bit vague, but Blanchett is going to slay this part. Goodness.

At Tor.com, Natalie Zutter talks about Kate Elliott’s Court of Fives and the importance of dealing properly with race in sf. Spoiler alert: it makes it richer.

Megan Patterson at the Mary Sue offers an interesting new angle on Final Fantasy X-2 by focusing on clothing and identity in the context of protagonist Yuna suddenly having to find a new identity after failing to die at the end of Final Fantasy X.

Alexandrina at Black Girl Dangerous introduced me to José Muñoz’s concept of disidentification:

Muñoz was an unapologetic utopianist who encouraged us to find radical hope and resistance in spaces that weren’t meant for us. He used the term disidentification to explain how QTPOC and other marginalized people could “recycle and recode” images in dominant culture. In his own words, “The process of disidentification scrambles and reconstructs the encoded message…and recircuits its workings to account for, include, and empower minority identities and identifications. Thus disidentification is a step further than cracking open a code of the majority; it proceeds to use this code as raw material for representing a disempowered politics or positionality that has been rendered unthinkable by the dominant culture.”

BuzzFeed writer Grace Spelman turns down MuggleNet co-founder Ben Schoen gently on Facebook when he makes a “joke” about getting married in a drive-through by mentioning that she has a boyfriend and then quietly unfriending him. His infuriated response demanding an explanation for why she did so and whining about Spelman’s choice to expose his behavior on Twitter is a terrifying reminder of male entitlement.

We have our first set photo of Chris Hemsworth as Secretary (or as I like to call him, Secretariat) in Ghostbusters. He has adorable glasses and a Ghostbusting suit of his very own.

Victor Frankenstein is going to be a deliciously good-bad movie, based off of McAvoy playing a total jerk, DanRad just wanting to science, and referencing Young Frankenstein. I APPROVE.

This GQ profile of Stephen Colbert made me cry in public.

There might be a Flight of the Conchords movie. No screaming as of yet, because it’s pretty vague, but rest yourself assured that I am preparing to scream.

Hey, you know that movie About Ray, where Elle Fanning is playing a trans boy and that’s terrible? Turns out the director doesn’t really understand what being trans actually means! Barf.

Elizabeth director Shekhar Kapur is developing a television show about Cleopatra that seems pretty purposefully centered on her and not the men in her life.

Our first look at Lady Gaga in American Horror Story: Hotel indicates that her character will be dressed amazingly and have no eyebrows. Thus, I demand that tumblr make her into Lady Hannibal for a little bit.

Wonder Woman officiated a same-sex wedding in Sensation Comics! And when Superman awkwardly asked her about her views on gay marriage, she just points out that, on Themyscira, that’s just called marriage. YESSSSS.

Dylan Marron’s Every Single Word project just tackled Harry Potter (the films, not the books) and it’s, uh, damning. People of color get six minutes of dialogue over the course of eight films. Woof.

I am only mentioning that Pokkén Tournament, the Pokémon fighting arcade game, is coming to the Wii U next spring because it includes Pikachu Libre, a lady Pikachu luchador with a heart-shaped tail. This is a good reason for this game to exist. (Although animals in pants always freak me out.)

Marvel’s Most Wanted, which will star Adrianne Palicki as Bobbi “Mockingbird” Morse, has a pilot order from ABC. Huzzah—not because I’m crazy about Agents of SHIELD, but more lady-led superheroics, please.

Helen O’Hara explains why Fantastic Four isn’t the herald (OF GALACTUS) of the end for superhero films.

Books
Purchased: None
Added: Subculture: The Meaning of Style by Dick Hebdige (via Teenage), Love’s Coming-of-Age by Edward Carpenter (via Teenage)