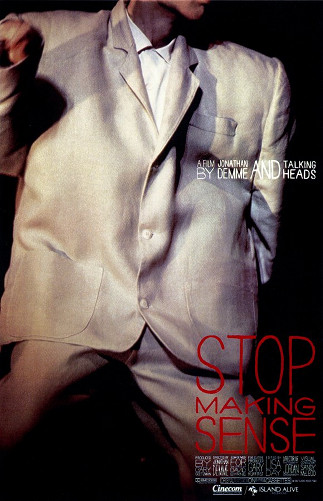 This is not particularly a review of Stop Making Sense.

I don’t know if that’s something I can actually write. The film is complete and whole and unassailable. I don’t think it read to the audiences who literally danced in the aisles upon its theatrical release in 1984 the same way it now reads to us, a little over thirty years later. Its rightful place as one of the greatest concert films ever made has lacquered it into something quite other, like an alien transmission from the almighty eighties. In “Stop Making Sense: An Appreciation,” Noel Murray dwells on several elements of the film that now appear studied and prearranged that were never planned at all. Through planning, execution, and sheer force of will, David Byrne and Jonathan Demme’s creation has transformed into a unique experience, blasting the Talking Heads’ determined creations almost directly into your brain.

And I find that level of musical intimacy suffocating in a way that I feel guilty about.

I have always been haunted by the idea that I am doing music wrong. I think it’s because I don’t understand the creative musical impulse the way I do nearly every other art form. I took piano lessons as a child and adolescent, but, because I had absolutely no interest in playing the piano, their end product seemed deeply unconnected to the music I listened to.

I come to everything from a fannish perspective, but I think my relationship to music is particularly colored by that. After growing up on a handful of scattered albums (ABBA, Enya, and Billy Joel, which certainly explains a lot), fanmixes were the first thing to introduce me to music outside of the narrow purview of my parents’ taste and what was acceptable to the alternative kids I ran around with. Because they were fanmixes, they were always handed to me with conspiratorial grace—underneath all the gorgeous formatting and covers, there was still the gleeful “this reminds me of them, can’t you hear it?”

I could hear it, through my CD player (kids, ask your parents) and the bright yellow Memorex CDs with twenty to twenty-two songs on them, with nothing in common except that I liked them and they reminded me of something I liked more. I tired of them and moved onto more. It’s a habit I still have; Spotify, as you might imagine, has been a godsend.

In my research, I’ve recently come across the emotional concept of attunement: the idea that you respond positively to people who reinforce your mood by having similar emotional and physical responses. (This is a generalization: it depends on the mood.) Smile at a smiling baby, and the baby links you two in its tender little head. Scowl at a smiling baby, and the baby learns not to share its feelings, creating an emotional distance. Quite simply, we like people who respond the way we do and respond to us in kind.

Musically speaking, therefore, I am attuned with other fans—not with the people who create the music. In any other medium, I am able to strike an emotional balance, because I know how the sausage is made and can empathize with the creative impulse of it. But because the creation of music is, to me, largely unfathomable, being in such close quarters with something so astonishingly visceral makes me uncomfortable. David Byrne is handing me something painstakingly gorgeous and I don’t know how to hold it with him looking at me.

There are moments I can connect to and delight in—bassist Tina Weymouth growling out “Fun, nasty fun” at the top of “Genius of Love” during the Tom Tom Club interlude is magical. The way the band slowly trickles onstage until they’re all there and the lighting and staging talks flight. But I am most fond of “Psycho Killer,” which opens the show. It’s so stripped down but still full of; it might be the only performance I can really get my teeth into, which, again, merely reflects my limited toolkit as an appreciator of music rather than casting any shadow on the unmitigated genius of the Talking Heads.

This was talky, weird, and personal, but, then again, so is my relationship with music.

I saw this film at a free outdoor screening.