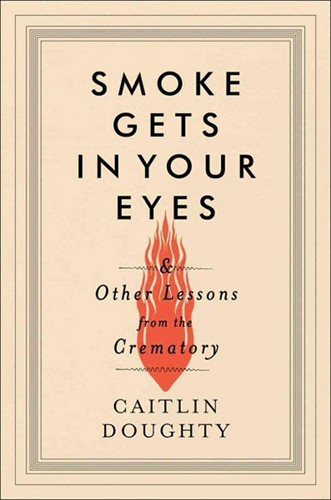 Smoke Gets In Your Eyes
by Caitlin Doughty

My entire life, I’ve had what I called “death scares”—existential panic attacks brought on by obsessively thinking about death. (Much like being queer, being what I believe is technically referred to as hellaciously anxious was blindingly obvious to everyone but me throughout my childhood.) I have a very specific memory of having one at the age of twelve, standing in the doorway of my childhood bedroom, staring out into the dark hallway, frozen in fear by the idea that it could all end. As an adult who enjoys her life, they’ve slowed down to maybe two a year (I suspect they’re much more about “WHAT IF I’M WASTING MY LIFE?!” rather than fearing the biological process of death), more if I read too many Cracked articles about unsolved murders.

When my anxiety is not in the driver’s seat, though, I have a more holistic approach towards death; after all, contemplating the ramifications of actually living forever renders me near catatonic. Death gives life meaning, to be trite (and quote Hannibal Lecter, that great humanitarian). My mother and I have had long conversations, her enthroned on the structurally compromised orange leather couch that dominates her living room and me lolling on the floor with the dog, about how it’s nothing to be scared of, because it’s a natural part of life and there’s nothing we can do about it. Fear isn’t useful when it comes to death.

But this is not a viewpoint that the Western world encourages. I have never seen a dead body, as everyone who has died so far in my family decided to be cremated. The ill and the dead are kept out of sight, for us to better forget that the flesh we inhabit (on loan from the universe, as the more cosmically attuned among us might say) is fallible. You can even see that reflected in the Western glorification of youth. If death is a horror to never constructively encounter, then of course aging is seen as something distasteful to be avoided at all costs.

Mortician Caitlin Doughty is the founder of the Order of the Good Death, a collection of funerary industry professionals devoted to fighting the “death anxiety and terror of modern culture.” I’ve known about the Order for quite some time and enjoyed Doughty’s YouTube series, “Ask a Mortician.” (This is how I discovered that my dream of a Viking burial at sea was not going to fly, as uncooked bits of Demoiselle would wash up on the Hudson. Oh, and it’s super illegal.) I’ve been meaning and meaning to read Smoke Gets In Your Eyes for quite some time now, but I’ve only now gotten to it.

Smoke Gets In Your Eyes is a very dreamy title for such a practical book. Doughty on death is, as predicted, sincere, passionate, and approachable. Her decision to attend mortuary school after determining to become an alternative mortician just to see what she’s up against speaks volumes about her holistic approach. She rattles off mind-blowing data left and right, detailing—in brief, it must be said—how the United States and much of the Western world began to medicalize death and remove the care and keeping of corpses and funerary rites from homes and families. When medical professionals lie to bereaved families about what you can and cannot do with a corpse, you know there’s a problem.

As a memoirist, though, I find her… lacking. I always feel like that’s a cruel thing to say, especially when someone is writing about their own life. The memoir has become its own genre roughly analogous to literary fiction these last few decades (a genre centered more on style than form), but the memoir should remain a deeply accessible form to people from all walks of life. Doughty talks about painful things, including a suicide attempt, all in her calm, steady, academically minded but deeply approachable writing style. It’s no fault of hers, I think, that renders me more susceptible to details about the human relationship to death.

For instance, Doughty points out that the widespread practice in North America of embalming our dead is financially motivated, not spiritually motivated. She explains the classical idea of ritual. I was particularly bowled over by the fact that “The average train conductor will involuntarily kill three people in his career. (53)” And she even touches on a favorite topic of mine, how the narrative of true love has replaced the narrative of religious salvation: “The psychoanalyst Otto Rank declared modern love a religious problem. As we grow increasingly secular and move away from the towns where we were born, we can no longer use religion or community to confirm our meaning in the world, so we seize a love partner instead, someone to distract us from the fact of our animal existence. (148)”

Ultimately, though, I found it more educational than anything else.

4 thoughts on “Review: Smoke Gets In Your Eyes”