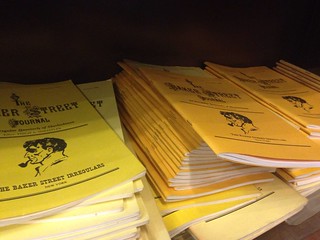 I discovered a treasure trove of The Baker Street Journal issues at the Mysterious Bookshop this weekend. I discovered a listing for an early Holmesian online presence called SHERLOCKTRON. Amazing.

Anne Helen Petersen looks at the Clark Gable and Loretta Young story in light of the recent revelation that Young considered their hidden encounter date rape. It’s a really fascinating and horrifying look at how the studio system could own people’s lives.
Joshua Rivera explains how DC Studios is getting Superman all wrong:

Superman isn’t good or special because he’s an alien who crashes on Earth and ends up being incredibly powerful. He’s special because after all that he becomes someone who always does the right thing because he was raised by a couple of decent people from Kansas. That’s it.

He is someone with the power to be the most selfish being in all of existence, and he decides to be selfless because he was raised by a couple of kindly farmers. And the beautiful idea behind him is that we don’t need to be bulletproof to be that way — we just have to be decent people.

Eclectic Method’s tribute to Jon Stewart on The Daily Show is hypnotic and great. It mostly reminds me of the rhythm we the viewers have with the show over the years. SOB.

Stef at Autostraddle talks about Jackie Fox’s recent revelation that she was raped by Runaways manager Kim Fowley in a room filled with her bandmates and other people. It’s really horrifying to see the different reactions to this from people, the system that allowed this to happen, and the sheer compassion and grace Fox is operating with while Cherie Currie is behaving as if Fox accused her of a crime for being a bystander to her rape.

The Pentagon will, apparently, soon lift the ban on transgender people in the military.

Lindsay Ellis at IFC says “Hollywood, It’s Time to Retire the ‘Loveable Misogynist’ Movie Hero.” (She also calls out Dr. Venkman for being awful, which I heartily appreciate. He’s the worst.)

Tilda Swinton is the Ancient One in Dr. Strange, causing the feminist nerd world to be of two hearts on this—yay, genderswapping and Swinton doing anything! Boo, whitewashing!

Carrie Fisher, in tweeting about parents upset that a slave Leia was included in a Star Wars action figure set, casts some serious side-eye on the famous costume. I am largely very skeeved by the role that costume plays in pop culture—sure, Fisher looked great in it, but that costume is literally about her being a sex slave. I’m glad to hear Fisher is conscientious of that.

Dan Akyroyd is going to be in Ghostbusters! Since it’s a reboot and Ray doesn’t exist in this version, I hope he’s a ghost.

Stephen Colbert talks to Neil DeGrasse Tyson about Pluto. It is delightful.

The A.V. Club’s Power Hour tackles Taylor Swift, so if you need a macro look at her career, here you go.

Disney is making a live-action prequel to Aladdin called Genie. …huh. We’ll see how this goes.

Kerry and Kevin Conran, the brothers that made Sky Captain and the World of Tomorrow, saw that film both hinder their careers and inspire several filmmakers. Olly Richards at The Telegraph looks at how that happened. It’s a really interesting look into how Hollywood works: the Conrans aren’t natural networkers, the budget for the film was mysteriously larger than what they paid to make it (making it look like a financial flop), and how studios look at fresh new work.

Emmy nominations are out! Tatiana Maslany finally got nominated! YES!

The first official photos for X-Men: Apocalypse reveal that ‘80s Storm will have both her signature mohawk and a cape. THIS IS INCREDIBLY IMPORTANT.

Emma Stone responds to the whitewashing in Aloha and often being cast as a love interest for men much older than her. As Carolyn Cox at The Mary Sue points out, it is a little weird for Stone to have to defend decisions male filmmakers make.

Caitlyn Jenner was honored with the Arthur Ashe Courage Award at the Espys, and her speech is deeply, deeply moving. I was crying watching it. She’s really taking command of her platform and privilege to speak for her community.

After that gross Vogue profile that dismissed her sexuality, Cara Delevingne has reaffirmed her bisexuality to The New York Times.

After a successful petition, MAC will be producing a Selena-inspired makeup line. I link to this because it is important to realize how you can make money talk for you; if enough people are interested in purchasing something, corporations will listen. (This can be a heartening and/or disheartening thought, often at the same time.)

Leigh Alexander talks about how much Final Fantasy VII meant to her. This made me cry and think about how much I love and value The Legend of Zelda: Ocarina of Time.

Once I read a review of one of my short stories, and the reviewer said that he was glad to see that Indians went through the universal experience. This was problematic for a lot of reasons, not least that the characters weren’t generically Indian, and of course they have the universal experience, what do we think ‘universal’ means?

Normality is key. Time to normalise. Shonda Rimes, the show runner of Scandal, talks about normalising television till it represents a world she sees and I think that is a valiant fight, one that is more important than calling for diverse books. Because the more we celebrate diverse books, the less chance we have of non-white people seeing the experiences, wants, likes, looks and habits of non-whites as normal.

James Douglas at The Awl talks about the Pixar Theory of Labour, or how Pixar films valorize productivity (among other capitalistic behaviors).

The problem, then, is that The Traitor Baru Cormorant comes across as being a novel about queer oppression that is – whether intentionally or not – written for a straight audience: that is, for people who can find novelty and drama in stories about unrelenting queer oppression because they’ve never personally experienced it, whereas those of us who have just want, by and large, to read about queer people being people, preferably complex ones who get their fair share of happy endings rather than the traditional tragedy.

Jack Halberstam ponders the butch’s role in queer culture at After Ellen.

Fan Sided is for sports fans, but I did find this piece about not watching two screens when you’ve gathered to watch one pertinent to my fannish experience. (Or, why in the blazes would you pay almost twenty dollars to see a movie and then text through the whole thing?)