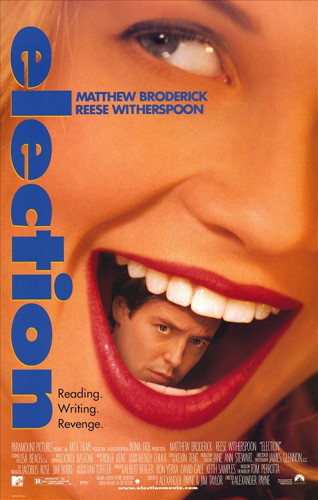 If you haven’t read the Dissolve’s amazing “The 50 most daring film roles for women since Ripley” and added roughly a thousand new films to your movies to watch list, please do so now. (I don’t mind. It’s a holiday here in the States, so I am probably asleep or at a screening of Magic Mike XXL. AMERICA!) It’s a wonderfully thoughtful list, even if it is more West-of-center than I’d like. Genevieve Koski, the editor who pitched the list, talks more about it with her fellow editors on the most recent episode of the Dissolve Podcast, which I also highly recommend.

The Dissolve is one of the few places online where I will read the comments. Their commentariat is particularly thoughtful and even-handed, so I was surprised to see exclamation points being thrown around in the comments in regards to Election. Not in regards to Reese Witherspoon’s performance as Tracy Flick in the film, which I’ve only ever heard praise for, but in regards to how much sympathy you should feel for Jim McAllister, Matthew Broderick’s character, and how much antipathy you should feel for Tracy, especially in the context of a student-teacher “relationship” (read: statutory rape, always always always) between Tracy and Jim’s best friend Dave that precedes the film, gets Dave fired, and motivates, on a subconscious level, Jim to ruin her campaign for student council president.

Election, Alexander Payne’s adaptation of the 1998 Tom Perrotta novel, seems to revel in that question: all of its main characters are lying to themselves to some degree. Do we pity them or despite them for how they lie to themselves?

Tracy works so hard that she alienates herself from other people. Jim believes he is a fundamentally nice guy, despite hating Tracy for her ambition, cheating on his wife, and rigging a student election. Paul, her competitor, is truly nice, sweet, and gracious, but even he has a dark side (revealed in a single line) that he doesn’t want to face. And Tammy, Paul’s little sister, thinks she sees right through the system, but she also believes that every girl she surreptitiously dates is her soulmate.

Ultimately, I think I pity the teenagers and despise Jim. Tracy, Paul, and Tammy are teenagers, for the love of Bowie. They’re only painting with the crayons they have. Tammy is a fifteen year old queer girl in love in secret; Paul has such a great life that he might feel guilty about having dark thoughts; and Tracy… Tracy is an ambitious girl trying to do everything she can to get ahead in the system that has been handed to her. (I mean, she ends up working for a Republican Congressman; Tracy may be willing to bend a few rules, but she is so unradical, in both the traditional and nineties senses of the word, that it hurts.) She does everything she’s been told to do to get ahead in life, spurred on by her mother and her indomitable will, but it leaves her so lonely and isolated that she believes a married man in his forties when he says that they’re in love. The contradictions these characters live and breathe are best shown when their internal narration conflicts with what’s unfolding on screen; hearing Tracy blithely describe Dave as someone she could have “real” conversations with as we watch her cross the threshold to Dave’s bedroom, timid as the child she is, is devastating.

Not, of course, that Tracy is a passive, tragic victim. Witherspoon is, as advertised, absolute perfection in the role, a cross between a permanently scowling baby bear and a young Hillary Clinton as filtered through Saturday Night Live’s maniacal and righteously entitled view of the politician. She’s prim, polite, and vicious. Somewhere, there’s an anger—an anger at the world not giving her what she wants no matter how hard she plays by the rules—inside Tracy. And when it flashes, it’s like lightning. Frustrated at a poster that won’t stay up, Tracy has an uncharacteristic tantrum, running through the halls and destroying every last campaign poster she can get her hands on. (The clean-up is hilariously staged like she’s getting away with murder.) When Jim confronts her about it and attempts to patronizingly tell her that her path in life is going to hurt her, she turns on him like a feral badger (is that redundant?), pushing on wounds she should have no knowledge of, like his inability to impregnate his wife. Oh, Tracy Flick gets exactly what she wants, in an almost admirably terrifying way, but nobody is looking out for her soul.

Jim, though… I find Jim ultimately despicable, because not only should he know better, but his lies have consequences in the lives of teenagers. Sitting on this side of Harry Potter, I can’t help of think of Snape pointedly ignoring Hermione’s upraised hand because he despises her for no good reason when Jim does the same to Tracy simply because he does not like her (because his friend committed statutory rape and got fired). Having Matthew Broderick (cast, in part, because of his role in Ferris Bueller’s Day Off) in the role makes him slightly more sympathetic, but there are great dark, desperate flashes of brilliance in his performance: the section where he blows off a class to prepare a hotel room for cheating on his wife for the second time in a day, which concludes with a parade of missed calls.

But I’m left wondering if Election is clear enough in its darkness, to emphasize how deluded Jim actually is. I don’t think any work of art owes it to an audience to be unsubtle (there’s a reason it’s a work of art and not a thesis) and my reading of this text is not going to be your reading of this text, but there is something to be said for clarity. Or perhaps I’m more troubled by the idea that anyone could watch this film and come away thinking that Tracy is some kind of schoolgirl Femme Fatale, especially since the film ends with Jim seeing Tracy years later, assuming that she’s sleeping with the politician she now works for. It flattens Tracy, I think, and she has a lot more to offer than that.

I streamed this film on Netflix.