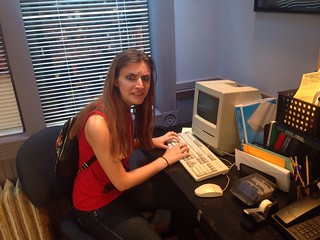 I went to the Seinfeld Apartment pop-up yesterday. The wait was very long, as you can imagine, but I got to swan about the apartment, take photos, and otherwise soak in the dissonance of experiencing in three dimensions an apartment previously known to me in only two. And today is all about Pride, even if it literally rains on my parade. (Okay, it’s actually a march in New York, but whatever.)

I also was at ladybusiness this week, talking about Judi Dench’s M.

The Supreme Court ruled that same-sex marriage is legal in all! Fifty! States! HAPPY PRIDE, EVERYBODY! (Even if Georgia has their Pride in the fall so the queer population doesn’t melt to death in the June heat.) Of course, it is really important to note that while this is HUGE, we shouldn’t rest on our laurels. There are lots of issues facing the American queer community that still need to be addressed. This is the beginning, not the end, and don’t let anyone tell you otherwise.

At NPR’s Code Switch, Gene Demby uses the Charleston shooter as an example of how assumptions that millennials are “better” at race actually perpetuate the stagnation of race relations in America.

Oh no—that Imperator Furiosa comic? Perpetuates everything the film gloriously did not. NOPE! NOT CANON. YOU CAN’T MAKE ME.

At Comics Alliance, Andrew Wheeler talks about Mile Morales becoming the official Spider-Man and what that means for diversity in comics. (Especially when the diversity among characters isn’t reflected in the creative team.)

Writer Tobias Bucknell talks about the usefulness of milestones versus goals in creative work, because achieving milestones in such a subjective industry is so unpredictable.

Ewan McGregor is down for another turn as Obi-Wan Kenobi. Considering his turn as Kenobi was one of the best things about the prequel trilogy, I would be so up for that, especially if it’s all about how he occupied himself while watching over Luke.

Hannibal has been cancelled. This is my fault, isn’t it, for waiting until this week to put the first season DVDs on hold at the library, right? However, Bryan Fuller and the show’s producers are actively looking for a new home for the series, so there may yet still be hope!

While Kelly Sue DeConnick is sadly finishing her run on Captain Marvel, she will be happily followed by Tara Butters and Michele Fazekas, the Agent Carter showrunners! GOOD.

This tumblr commentary on Mad Max: Fury Road highlights its Maori representation, especially in contrast to how Americans might view the film racially. (Read the whole thing; the first part gets rebutted.) I’ve been thinking a lot about how racial systems don’t overlap neatly in different contexts lately, so this was good to read.

Park Chan-wook’s adaptation of Fingersmith will be set in Japan and Japan-occupied Korea in the 1930s. I am so excited about this project.

The Museum of Liverpool is currently hosting an exhibit about April Ashley, a trans woman model who worked in the seventies but whose career was cut short when a “friend” revealed her status as trans. It’s good to see her get her due.

What white people are really asking for when they demand forgiveness from a traumatized community is absolution. They want absolution from the racism that infects us all even though forgiveness cannot reconcile America’s racist sins. They want absolution from their silence in the face of all manner of racism, great and small. They want to believe it is possible to heal from such profound and malingering trauma because to face the openness of the wounds racism has created in our society is too much. I, for one, am done forgiving.

Rose McGowan was fired by her agent after tweeting about the sexist casting practices for the latest Adam Sandler movie. Ugh, disgusting. I’m sure she’ll survive, but still, it’s a little repulsive to think that somewhere, there’s an agent so terrified of Sandler’s sway that he’ll drop a client because she pointed out that actresses were asked to audition for the role in push-up bras.

A-Force will survive Secret Wars and become an on-going series, although Dazzler will be ditching her disco duds for an admittedly cute skater dress version of her eighties costume. (If I had my way, Dazzler would wear her original outfit all the time and embrace being willfully dated.)

Teresa Jusino’s response to a Hollywood Reporter article about straight male actors catering to gay male audiences is spot-on. I didn’t read the original article, but Jusino’s excerpts reveal such a narrow definition of sexuality and desire that I kind of want to gag.

This review of In and Out gets at why I find even the concept of the film so triggering, although Brody doesn’t frame it that way. The idea that one’s emotional life should be neat and tidy (the protagonist functions on five emotions, which makes sense for a ninety minute movie) makes me feel very ashamed that mine does not.