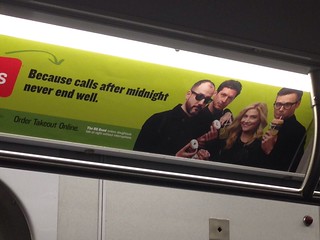 You ever just need one of those weekends where you just need sleep? That’s where I’m at right now.

MD Laclan swings by Fantasy Faction to comment on the current state of the Hugos, the sf community, and Puppies Sad and Rabid:

Nugs, if you think Star Trek is apolitical, I cannot help you. Really, I can’t. It is expressly and openly, from conception, a liberal political project designed to show the benefits of diversity – one massive social comment set in space. I hate to be the one who breaks this to you. Uhura and Kirk? Ever wondered why there are so many different nationalities on The Enterprise?

Foz Meadows explains why Jupiter Ascending and The Matrix are basically the same movie.

Jerry Seinfeld has been on a bizarre campaign against political correctness in comedy, specifically citing how ridiculous he finds it that the young people he meets call him out on sexism and homophobia—like his own daughter. Nathan Rabin explains how silly this is.

At The Atlantic, Oliver Morrison examines political comedy in America and how satire (which is all about questioning, deconstructing, and occasionally destroying establishments) is a more natural fit for liberals and progressives.

Starz has greenlit Bryan Fuller’s adaptation of American Gods! This reminds me, I need to watch Hannibal stat.

Our Lady of Celebrity Gossip Anne Helen Petersen looks at the state of tabloid journalism—how certain tabloids got started and how they’re, strangely enough, a safe place for journalists to experiment.

Rachel Edidin talks about autistically coded characters in X-Men and shares her mixed thoughts on the value of labelling in representation:

I don’t know if there’s a good answer here. I know what I like and look for: representations of Autism or queerness or other outside-the-narrow-default stuff I identify with that are casual and don’t involve labels but are also clearly intentional. Showing a character taking antidepressants as part of their routine, even if their depression is never discussed as a plot point; or casually using neutral pronouns. I want to see mantelpiece photos of unconventional families, and ASL interpreters in classrooms. What it comes down to, I think, is that I want canon representation whose legitimacy isn’t dependent on labels.

Dan Nosowitz at Atlas Obscura asked a linguistics professor to analyze Blink-182’s “First Date.” The results are a really fascinating look into accent construction in punk (an American genre that Brits improved by politicizing it) and pop-punk (born out of, but not limited to, Southern California).

Nick Allen at RogerEbert.com rejects the idea that bringing political thought to films is a jerk move. (This is in response to an actual tweet by someone who, I’m sure it will not surprise you, appears to be a straight, middle-class, white, cisgendered male.) Matt Singer at Screen Crush has similar thoughts.

To promote a contest he’s doing for the charity Afterschool All-Stars, Arnold Schwarzenegger put his Terminator costume on and wandered Hollywood. It’s kind of adorable. “Don’t bump my selfie stick.”

People, Places, Things is Jemaine Clement’s latest film and it looks so great. I had no idea I needed see Clement as a scruffy, funny single dad falling in love with his student’s mother while trying to create a new way forward for his family. Also, Jessica Williams is in it.

The Charleston attacks make me sick to my stomach. As Jon Stewart said, this is one hundred percent a terrorist attack. My heart goes out to all the victims and their families, and I really hope that this opens up a dialogue on how the South often cries heritage when it comes to perpetuating racism. (Of course, how awful is it that we have to hope that this latest vicious, cruel attack is the one that will make us change things?) I mean, it made Mitt Romney call for South Carolina to stop using the Confederate flag. Maybe.

James Leask stops by Rachel and Miles X-Plain the X-Men’s website to talk about Dani Moonstar and her Cheyenne identity. Specifically, he focuses on how her Cheyenne identity has, in recent years, been swallowed up by her association with Asgard (she’s a Valkyrie), rendering her vaguely ethnic instead of someone who once seriously, respectfully, and consistently examined what it meant for her to be Cheyenne and a Valkyrie and a mutant.

At Panels, Marcy Cook looks how Batgirl’s creative team revised Batgirl #37 (that transphobic issue) in the series’ first trade to remove any transphobic language. It’s really heartening to see creators take this kind of feedback and incorporate it, especially in comics.

Because Wes Anderson’s casts are very, very white, Whoopi Goldberg gave a resume to Jason Schwartzman and Adam Scott to give to him on The View. Well-played.

We have our first photos of Kristen Wiig, Melissa McCarthy, and Kate McKinnon in Ghostbusters: The One Clare Likes. Everybody looks great. McKinnon’s look is everything. EVERYTHING.

Books
Purchased: None
Added: The Book of Phoenix by Nnedi Okorafor (via The Book Smugglers)

Films
Purchased: None
Added: One More Saturday Night (via the AV Club), The Barbarians (via fandom!secrets)