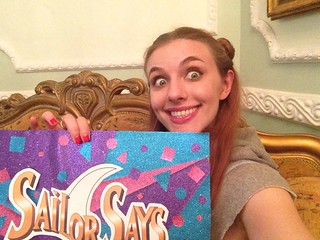 FlameCon was just amazing. It was so great to be able to turn to anyone in my vicinity and not have to test the waters to see if they were cool with me being queer before geeking out. SO MANY GOOD CONVERSATIONS! Pictured above: my Sailor Moon costume. Specifically, Serena from the first American dub, because nineties fashion.

In the wake of Fun Home’s win for Best Musical, Ali at Autostraddle shares her own story of not being able to find a space for herself as a butch lesbian in musical theater and the impact of the show. “Ring of Keys” is such a great song.

DC Comics’ Twitter account made a joke about Bizarro representing people of color because he’s grey. NO. FULL STOP.

At Feministing, Reina Gattuso looks at Amy Schumer’s Glamour Trailblazer Award acceptance speech and points out how it deconstructs the absurd idea that a woman’s worth is tied to her ability to “earn” sex from men when rape culture assumes access to all women, all the time.

This article about Serena Williams’ evolution from teenager to woman in tennis at Grantland is fascinating. I especially love how Brian Phillips actively deconstructs describing Williams as a force of nature, because that erases the hard, hard work she’s done to get where she is.

At Jacobin, Adam Stoneman contrasts and compares the Rich Kids of Instagram and conspicuous consumption of the European elite in the seventeenth and eighteenth centuries. As in, directly compares pieces of art with selected photos. It’s genius.

Comics professional John Byrne compared trans folk to pedophiles on his own forum. It’s a hugely triggering post, of course, but really speaks to the fact that we have a long way to go on trans representation and inclusivity in comics, let alone media, if the legends of the medium think this way. Also: aw, man, I really wanted to read Sensational She-Hulk without feeling gross about the dude who made it. COME ON.

In much better trans news, Madame Tussaud’s is making a wax figure of Laverne Cox! Yay!

Chris Hemsworth will be playing the secretary in Ghostbusters: The One Clare Likes. MARVELOUS AND CORRECT.

At Rookie, writer Ragini shares her journey with body acceptance and talks about how beauty shouldn’t be the thing that earns you basic human dignities.

Christopher Lee passed away on Sunday. It’s so shocking to feel like this is such a massive loss when he had lived such an incredibly full and creative life. Here’s to you, sir. BFI has made one of his early films, Cross-Roads, available to watch for free in tribute. And here’s a lovely photo of Lee as Saruman, one of his most beloved roles (for him and us).

Chiwetel Ejiofor might be in Doctor Strange as… the villain. Doctor Strange is shaping up to be a hot mess. SWITCH THE ROLES, MARVEL. Ejiofor is such a fantastic actor; I really don’t want to have to watch a film where Cumberbatch defeats him.

Quicksilver is back—for X-Men: Apocalypse, in what I pray will be a scene stealing duet with Jubilee.

The Dissolve’s Genevieve Koski talks about costuming as storytelling and how sticking lady types in office heels for combat situations is sloppy storytelling. (I mean, even Sailor Moon, where the sartorial choices are made sheerly for the cool factor, has a reason to put Sailor Mars in heels. That reason? Rei is terrifying. TERRIFYING.)

Noelle Stevenson’s Nimona is getting an animated adaptation! Congratulations to her. That’s amazing!

At New York, Dan P. Lee looks at the American obsession with straight teeth, despite the fact that it’s almost entirely a cosmetic procedure.

Films
Purchased: None
Added: Never Talk to Strangers (via the AV Club)