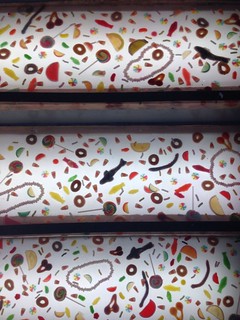 There’s something somehow nineties about this floor decor.

I was over at Queerly Seen this week, talking about Oscar Wilde’s legacy to the immediate next generation of queer writers—namely, his niece Dolly, my favorite person Natalie Barney, and an entire salon of queer literary women in Paris in the early twentieth century. I also talked about The Picture of Dorian Gray and the origin of the “Love that dare not speak its name” speech. Thanks, Cass!

Here’s Matt Fraction on Late Night with Seth Meyers last week! He is so thrilled and confused to be on a talk show. It’s very sweet.

I had never heard of Elagabus, a Roman emperor who was, if not a trans woman in the way we understand today (the ancient world had a lot more room on the gender spectrum), gender variant to the point that most queer historians are comfortable with using female pronouns for her. She’s rumored to have offered half of her empire to any physician who could perform gender reassignment surgery on her. Here’s a brief history of her life.

At Vulture, Abraham Riesman details the history of Ultimate Marvel, which will be ending in this summer’s Secret Wars—but not, we hope, before safely depositing Miles Morales and Spider-Gwen in the 616.

Speaking of George Miller, there’s a documentary in the works about his canceled Justice League film, which would have starred Megan Gage as Wonder Woman. Yes, please!

Drag queens Danny Cowlt and Stripperella perform as Storm and Dark Phoenix. This is EVERYTHING.

SCREAM! One of the exclusives at San Diego Comic-Con this year is an action figure set of Tina Fey and Amy Poehler as Weekend Update anchors. There are no plans for it to be released afterwards, though, so boo.

And I’ve started to realize that it’s not so much a matter of putting on slash goggles as it is taking off your heteronormativity goggles. Slashers don’t “see slash” everywhere. They just apply the same standards to two men (or two women) on screen as they would to a man and a woman. And suddenly it’s easy to see how the chemistry could be homoerotic – but we’re not supposed to see that, because we’re supposed to assume that all characters are 100% straight unless explicitly told otherwise.

Denver Comic-Con managed to have a panel about Women in Comics without having a single lady on the panel. Their response to the Mary Sue is really, really defensive.

Amma Asante’s next project, the Seretse Khama biopic A United Kingdom, might be just about to nail down David Oyelowo and Rosamund Pike as its leads. Yes, please.

Very important: remember that your yoga pose (or whatever exercise form) might not look like your instructor’s because you are built differently! I once had a yoga instructor tell me that I arched my back too much, so I diligently trained myself out of it in all of my movements. Now, I’ve discovered that I’m constantly pinching all the nerves in my hips because my back is supposed to be the way it used to be. (Luckily, it’s an easy, if drawn out, fix.) You do you, lovely.

Chris Pine might be Steve Trevor in Wonder Woman. I… I do not care, but feel obligated to share.

Scientist journalist John Bohannon talks about how he—and a group of scientists—managed to publish and get mass attention on a biased and bogus study they conducted in order to prove how shoddy science journalism can be. Fascinating.

Tilda Swinton might be in Doctor Strange… playing a Tibetan character. Yep, Marvel managed to mess up the idea of casting Tilda Swinton. Woof.

The Book Smugglers hosted a round table on diversity in publishing moderate by Charles Tan and featuring M Sereno, Aliette de Bodard, Zen Cho, Bogi Takács and JY Yang. I was very intrigued to hear them talk about how publishing works in translation might be a good way to make headway in diverse publishing. It’s not that the material isn’t out there; it’s that it isn’t accessible to Anglophones.

At NPR, Roxane Gay also talks about diversity in publishing:

No list can be comprehensive, but when we see alabaster roundups year after year, it warrants some scrutiny.

It’s one thing if a media brand deliberately targets segmented audiences. The Root publishes reading lists of all, or mostly, African-American writers. Jezebel does the same with female ones. But those sites make it clear that they’re not trying to talk to everyone. Big, national, general interest news brands like NPR and the NYT say they are. If these sites truly want — and, increasingly, need — readers of all colors and all backgrounds to tune in, monochromatic content is working against them. The message we get is, “We don’t see you. We don’t need you.”

The Stranger’s last issue of May has a feature on male musicians meant to parody how female musicians are covered in traditional media (i.e., Rolling Stone.) It is hysterical.

Julie Gerstein, Jessica Probus, Anne Helen Petersen, and Rachel Wilkerson Miller of BuzzFeed talk about the rise of granny style and hair dyed prematurely gray. It’s fascinating, and they hit the nail on the head when they talk about how it’s mostly conventionally attractive white women in their twenties who do this trend, not, say, women in their forties. (Also spot-on: the idea of gray being the next step beyond bleach blonde.)

I didn’t think Ella Wilson’s “The Therapist Who Saved My Life” was going to resonate with me—I struggle with anxiety, not depression—but it did. It so, so did. It’s a hard read, but her words on shame and how children can absorb it hit me in the heart so hard.

Some people love cemeteries; I love dead malls. (I mean, I love all malls, as I am fascinated by their often contradictory constructions of capitalism and community, but it’s the dead ones that tend to be full of portent.) Mike Nagel at the Awl covers the last days of Plano’s Collin Creek Mall.

Bryan Fuller talks to Entertainment Weekly about his refusal to put rape scenes in Hannibal. He does end up defending that Sansa scene from Game of Thrones, but I think his major point—that while cannibalism is basically a fantasy crime, rape is in the culture—is sound.

Books
Purchased: None
Added: Sisters of the Revolution edited by Ann and Jeff VanderMeer (via Tor.com)

Films
Purchased: None
Added: Felt (via the Dissolve)