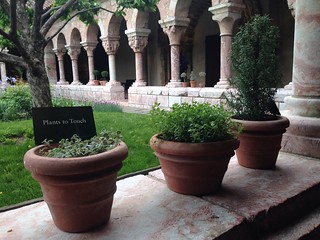 I visited the Cloisters yesterday, and they were absolutely amazing. Otherwise, though, not much to report from this past week other than that sleep is great and should be your friend.

I know everyone and their mother has been linking Sarah Maslin’s “The Price of Nice Nails”, but here’s another, supplemented with Emily Nussbaum’s 2007 piece on nail salons.

Robert Kolker’s article about Michael Egan, the man who recently sued Bryan Singer for sexual assault but settled out of court, is heartbreaking and unsettling, especially all the business about the lawyer who took Egan’s case and then mishandled it.

Full House gets the 100 Episodes treatment at The A.V. Club, which actually ends up explaining a lot about ABC sitcoms over the years.

This Vulture article about why remakes (like Fuller House) are cropping up in television also explains a lot about television.

Kat Overland at Women Write About Comics suggests several Marvel characters that could be used to diversify the next season of Agent Carter, which will be taking place in LA.

The toy of Black Widow’s awesome motorcycle entrance from the film’s climax replaces her with Captain America. UNACCEPTABLE.

Tor has announced that it will publish The Geek Feminist Revolution, a collection of feminist essays by the amazing Kameron Hurley, in 2016. Woohoo!

Supposedly this is what Lupita Nyong’o’s character will look like in Star Wars: The Force Awakens and… it’s underwhelming to the point that I don’t see why she had to be CGI? I had been hoping for “sentient void,” though.

The identity of the new Thor has been revealed! Spoilers at the link. I’m into it, but I had good (imaginary) money on it being his mom. Awwww.

Linda Holmes nails the problem with Black Widow’s storyline in The Avengers: Age of Ultron—namely, that we have so few representations of women in that franchise (and… most films) that it ends up becoming the only story we tell about women.

J. Bryan Lowder’s long “What Was Gay?” is an amazing look at gay culture, looking specifically at the difference between homosexuality (which has been around since the dawn of time) and gay culture (which was invented when homosexuality was pathologized in the Victorian era). I’m particularly taken with the concept of cultural transmittal—how is culture transmitted, from whom, and why? Lowder links to a lot, but I’m going to highlight his own “Postcards from Camp,” which defines camp as an eye for specific details often divorced from the greater context of a piece, and Hugo Ryan’s amazing profile of Queen Sabrina, Flawless Mother.

While promoting Carol, the new film adaptation of The Price of Salt, Cate Blanchett mentioned that she’s had relationships with women in the past. Aw, yeah.

Marvel is apparently eying Ava DuVernay for Captain Marvel or Black Panther. I mean, it’d be great, but I don’t think it’s going to happen.

We’ve got the first trailer for The Muppets (the television show). It’s a little too Office-y for me, but Kermit bemoaning that his life is now a “bacon-wrapped hell on earth” is hilarious.

Ana’s review of Pride is well worth reading, especially her thoughts on solidarity in the face of the madness of the UK government at the moment.

Diego Luna has joined the cast of Star Wars: Rogue One.

Supergirl looks so, so fun, y’all.

Alyssa Rosenberg at The Washington Post explains the difficulty of diversifying Hollywood.

Luke Winkie at Kotaku looks at people who play vanilla World of Warcraft (i.e., play the base game without any expansion packs) and ends up talking about the nostalgia people have for fictional worlds. It made me think of all the time I logged in The Legend of Zelda: Ocarina of Time and how nostalgic I can get for that Hyrule.

Matt Fraction will be on Late Night with Seth Meyers on Thursday! Meyers is a huge comic book fan, so I’m sure the interview will go great.

Samantha Nelson at The A.V. Club talks about how The Avengers: Age of Ultron could have better engaged with the concept of fatherhood.

Lindsay Zoladz at Vulture writes about “Yoko Ono and the Myth That Deserves to Die”. It’s a genius and infuriating piece, because Ono is such an interesting artist and she’s been reduced to a punchline in American culture.

Books
Purchased: None
Added: The End of the Homosexual? by Dennis Altman (via Slate), Out in the Country by Mary L. Gray (via Slate)

Films
Purchased: None
Added: Stage Door (via the A.V. Club)