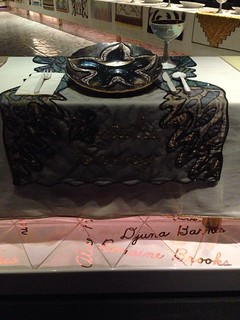 I went to the Brooklyn Museum yesterday and my friend Andrea very kindly surprised me with the fact that “The Dinner Party” is installed there! I’m, obviously, super-fascinated by feminist history, and “The Dinner Party” is infamous, complicated (shall we say white feminist or very white feminist?), and physically commanding. But I ended up squatting to the floor and clinging to the railing when I saw that my beloved Natalie Barney had a seat at the table.

I was over at Queerly Seen again this week, talking about Stephen Fry’s status as “the modern Wilde.”

Speculative Fiction 2014, in which I am included among many awesome writers, reviewers, and other fan writers, dropped on Tuesday! Go check it out!

Let’s just keep all the The Avengers: Age of Ultron pieces in a nice list up here, shall we? Assume spoilers for these bad boys.

Eve Ensler was consulted for Mad Max: Fury Road, as the eponymous Max and Imperator Furiosa rescue four women from the film’s villain. That’s really heartening, to hear that the film is not trying to titillate with abused women (oh my God, our culture is so messed up) but tell their stories and give them agency. I mean, execution is everything here, but I like that the care was taken.

The Dissolve and Pitchfork team up to present “A Brief History of PG-13.”

Vanity Fair celebrated May the Fourth by publishing Anne Leibovitz’s stunning photographs of the set and characters. Which means that we know more now than we did before—namely, that Lupita Nyong’o is playing a CGI character (ugh, the erasure of people of color via CGI in sf films) named Maz Kanata who is also a space pirate with a castle filled with scum and villainy (!!!). Also, yeah, Gwendolyn Christie is Captain Phasma, the Chrometrooper herself.

Carly Fiorina has announced that she’s running for president as a Republican, specifically telling reporters that the war on women can’t be a talking point if it’s two women against each other. I think I just laughed so hard my spleen popped out.

Grace Lee Whitney, best known as Star Trek’s Yeoman Janice Rand and for her years of helping others deal with their own substance abuse, passed away on Friday. Godspeed and bless.

Here’s the first photo of the Suicide Squad in costume. Man, remember when I would have punched a shark to see Harley Quinn on the big screen? I mean, Robbie will do it well, but… I’m just… I’ll be over in the corner rereading her aughts title.

At The Washington Post, Alyssa Rosenberg talks about how Princess Leia is a political icon. Leia is the best, y’all. THE BEST.

Women’s college Smith College (along with Mount Holyoke and Wellesley) have changed their policies to allow trans women to attend. Woohoo!

Memory at In The Forest of Stories shares her massive Marvel Unlimited recommendations list.

Martin Freeman has joined Captain America: Civil War, so it’s official: EVERYBODY IS IN THAT MOVIE. Poor Steve.

Genevieve Valentine runs down the red carpet at the absurdly Orientalist Met Gala.

At Feministing, Mahroh Jahangiri looks at the human interest stories focused on gay Israeli men and their surrogate-born babies in the wake of the horrific earthquake in Nepal while the surrogate mothers stay put to point out… a lot of things. Jahangiri does a fantastic job of showing why intersectional feminism is important, because of all the intertwining politics inherent in the situation.

So it looks like Harley Quinn might be the one who gave Joker all those tattoos in Suicide Squad. On the one hand—Harley learning to tattoo? She’s super-smart, not a problem. On the other hand—what does this mean about her backstory?

Agent Carter has been renewed! Pound the alarm and pour the champagne, but don’t rest on your laurels; I’m delighted to see that Agent Carter fans have started calling to #DiversifyAgentCarter on Twitter. Why? Anna Cabe at Racialicious explains why, speaking specifically about Asian representation in the show.

X-Men: Apocalypse is confirmed to have bald Charles Xavier. I am curious—does he just go full bald, decide to shave due to balding, or does Hank switch his shampoo with Nair because their relationship is so tragically unhealthy?

Natalie Portman will be playing Ruth Bader Ginsburg in On The Basis of Sex, a biopic about her championing of equal rights over her long career. That’s amazing!

In 1990, the mayoral candidates for Providence, Rhode Island played SimCity for an article. One candidate believed, to the day she died, that her poor performance in the game cost her the election. Jason Koebler at Motherboard looks at both that story and the possible utility of the SimCity franchise—now light years ahead of what it was then—as a training program for governance.