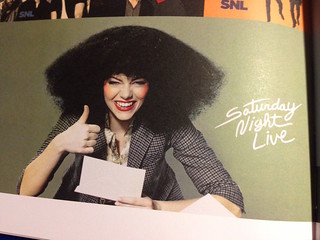 This was one of the many times I burst into tears of happiness while reading my gorgeous Saturday Night Live Taschen book. They used the original logo for this bumper. My heart! My heart!

I was over at Lady Business this week for their Female Villains theme week to talk about the three most transgressive villainesses in the James Bond franchise.

Author Sabine Heinlein discusses her decision not to have children, both in terms of other people baffled by her choice and her own wants and desires.

At The Pool, Sali Hughes talks about how important Madonna is to her:

And while many of us may hark back to an 80s Madonna, all ramshackle and soft-fleshed, or 90s Madonna, when Like A Prayer’s tracks and videos made the art of pop music appear to have reached its pinnacle, Madonna has no interest in staying frozen in time. Nostalgia is not her job – pushing the envelope off a cliff is. Sometimes we’ll love it, sometimes we won’t. But I will always prefer to watch Madonna fall than see most other artists stand. And besides, for me and other fans the world over, it always boils down to one clear commitment: with someone as extreme, maddening, polarising and groundbreaking as Madonna, you are either in or you’re out. And, after 31 years of watching the most important female artist of all time, I am resigned to the fact that I will never be anything other than in.

Tilda Swinton wrote about Amy Schumer for TIME’s 100 Most Influential People (ahead of their sharing the screen in this summer’s Trainwreck) and it is GLORIOUS.

Wesley Morris at Grantland looks at the uproar over Trevor Noah’s appointment to The Daily Show in the context of how the show went from basic news parody to a respected institution.

How CAN we interact with received narratives of romance without engaging in discourses of violence? I don’t know that the answer is simply–writing, for example, a historical romance novel where your protagonists don’t *visibly* benefit from the slave trade or rape anyone. Every regency romance is fundamentally predicated on empire and slavery (which is Edward Said’s point about slavery in “Mansfield Park”). Every het romance is the patriarchy, from Gor to “Gaudy Night” (a horrifying crossover). This is sort of what Dworkin’s oft-misunderstood contention that “violation is a synonym for intercourse” (from “Intercourse”) aims to convey. The most seemly stories with the most loving, affirmative, consensual relationships still use the grammar available to us, are still built on these foundations. I don’t know that a seemly story gnaws at the roots of the shitty rape-culture world-tree harder than a story like this does–I don’t think we’re yet in a place where only seemly stories resonate for us, and speak to our understanding of sexuality and its problems and opportunities.

We write and read dubcon because it’s what rape-culture enables us to imagine and to want. Maybe we reinforce rape-culture in writing and reading it. But maybe we also interrogate it more meaningfully from this position of engagement? Does leaving the field win the battle?

Sometimes slash is a kind of obvious flight from the implications of what it would mean for a man to enact a romance story or a fic’s coercive plot on a woman–which is not to dismiss or trivialize same-sex rape, so much as to point out the way some writers use slash to ask questions about how power works in relationships *other than* as a manifestation of gender.

JODIE! JOOOOODIE. Tale of Tales is an upcoming film from Italian filmmaker Matteo Garrone that looks like it’s largely about Selma Hayek playing a queen who satisfies every trope about evil older women in fairy tales. Will it deconstruct it? I hope so.

Fan magazine Black Gate has also withdrawn their nomination from the Hugo ballot, explaining why here. I had not known that Connie Willis is not hosting the Hugos this year specifically because of Rapid Puppies and Sad Puppies.

Foz Meadows kicks off ladybusiness’ Female Villains week by pointing out that most female villains’ narratives are just narratives of agency—that’s how frightening women being people are to the kyriarchy.

Recently, I’ve realized that I am very much into astrology. I just find it really comforting and significant, both of how arbitrary it is (it’s about how the stars were aligned at my birth instead of anything about me) and how much it says about humans as storytelling critters (we will derive meaning wherever we damn well please!). Anyhoo, I’ve been reading Chani Nicholas for my astrology fix lately and I’ve been enjoying it. If you’re an astrology type, you might enjoy her!

At The Guardian, Jon Stewart talks about his decision to leave The Daily Show. (Oh, and he’ll be leaving August 6th.) This article also mentions that he proposed to his lady via crossword puzzle. I am dying of cuteness.

Original X-Men teammate Iceman came out as gay in All-New X-Men this week. While this is a great, heartening step, it raises some questions, especially about the brief moment of bisexual erasure that occurs before the coming out itself:

Netflix is drunk on power and is creating a sequel to Full House, Fuller House, which is basically a gender-swapped version of the first. Yes, Stamos will be in it, don’t worry.

Rose Byrne and other lady Australian artists have teamed up to create the Dollhouse Collective—a collaborative space for women, by women, and about women. DREAMY. Where do I sign up?

So yeah I want to see ANATOMICALLY INCORRECT, SKINNY, UNDERWEIGHT, VULNERABLY POSED men who’s image says nothing more than “please bend me over and fuck me hard, I’m a powerless sex object only here to compliment your ego” with large come hither eyes, to an audience of women. If you accomplish this, the result will be utterly repulsive because women don’t treat men like that. Women don’t want to see their men looking like they’re weak, deficient walking dildos who don’t take up space. Why? Because women respect men, society respects men, but men do not respect women or the female body, and neither does society.

Beauty and the Beast’s cast continues to shape up, with Ewan MacGregor as Lumière and Stanley Tucci as an original character who gets turned into a piano. I’m torn between the brillaince of this cast and the CGI abominations that will most likely be their furniturized selves. I am so down.

At io9, Charlie Jane Anders talks about robots, gender, and what utility robots could possibly have for gender.

I’m not excited for Ant-Man, but these tiny ant-sized billboards being used to promote the film are really cute and clever.

At Feministing, Katie Barnes talks about the intersection of traditional masculinity and misogyny, which can be a minefield for masculine-identified women.

Barbara Calderón-Douglass at Vice discusses the cultural development of chola as a politicized fashion statement.

Anne Helen Petersen has begun a project interviewing women about their mothers and then the mothers themselves that is shaping up to be fascinating. Here’s the first installment.

A group of Native actors walked off the set of an Adam Sandler western parody because it was so offensively racist.

During a press conference, Jeremy Renner and Chris Evans joked that Black Widow was a “whore” and a “slut”. They’ve since issued apologizes—Evans more constructively than Renner—but still. Not okay.

Riz Ahmed is joining Star Wars: Rogue One! More diverse and fantastic actors for the next round of Star Wars? It’s like it’s my birthday!

POUND THE ALARM: A Girl Walks Home Alone At Night is now streaming on Netflix.

Paramount will be distributing DVD copies of Selma to every high school in America. That sounds amazing.

Bruce Jenner came out as a transgendered woman in an interview with Diane Sawyer. Meredith Talusan at BuzzFeed discusses the impact and possible further impact of Jenner’s transition, especially since she wants to make an reality show about her experience.

Books
Purchased: None
Added: The Way We Never Were by Stephanie Coontz (via this article)