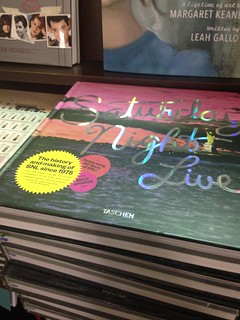 So… I’ve been really busy this week!

I’ve joined forces with the always wonderful Cass at Queerly Seen for Queering Wilde, a month long project examining and reclaiming Wilde through a queer lens. As a queer Irish(-ish) woman, Wilde is a huge part of several of my histories. I also got to read Truly Wilde for this, so feel free to ask me about Natalie Barney and I will tell you an awesome story about Natalie Barney. I’ll link to the pertinent reviews as necessary.

I’m also over at ladybusiness for my biweekly Xena: Warrior Princess column with Renay. This week: “The Path Not Taken.”

Oh, and The Book Smugglers recently announced the table of contents for Speculative Fiction 2014, which includes a sparkling list of sf’s finest… as well as yours truly. I’m just over the moon about it and can’t wait to read the whole anthology. It hits stores in May and all proceeds are donated to Room to Read.

SPECTRE has a lot of promising elements and a few not so promising ones. (If M turns out to be Bond’s biological mother, I will be furious.)

Have a nice, long interview with the Wachowski siblings about Jupiter Ascending:

We were super curious if you could make a movie that had the kind of character that Dorothy is in The Wizard of Oz. The Wizard of Oz was kind of a movie we were thinking about when we started thinking about Jupiter. We loved The Wizard of Oz and there aren’t movies like The Wizard of Oz right now. We were like, “Could you take a character like Dorothy who’s a female and who goes on this journey and she doesn’t have to beat people up? She doesn’t have to fight constantly or use weapons and kung fu in order to be the hero. Can she just use empathy?” That was sort of against the grain of what the culture expects or what the culture wants right now. There was some rubbing as we went through the process and I’m sure there will be rubbing in the post process too.

Trevor Noah’s official appointment to The Daily Show was swiftly followed by the discovery of several misogynist, fat-shaming, and anti-Semitic tweets of his from a few years ago. The response has been mixed, from Noah’s non-apology to Patton Oswalt’s rant dismissing the idea that jokes should try to be inclusive, but it’s generated a lot of interesting conversation.

Maisie Williams is going to be on Doctor Who! I haven’t been watching, for “not owning a television with access to BBCAmerica” reasons, but I’d love to see her give Twelve hell.

Foz Meadows talks about men, fandom, and the common masculine discomfort with seeing feminine language being presented as neutral.

Purvi Patel has been sentenced to twenty years in prison for a miscarriage the state of Indiana claims is both abortion and also the deliverance and then abandonment of a live fetus. This is absolutely disgusting. This feels like something out of The Handmaid’s Tale.

The next addition to Disney’s live-action reboot of my entire childhood? Mulan, with a script from Elizabeth Martin and Lauren Hyneck. POUND. THE. ALARM.

The Mortal Instruments is coming to ABC Family. Given that the film adaptation is one of my favorite bad movies, I hope that the television series provides more enjoyment along those lines.

Angel might be in X-Men: Age of Apocalypse? Eat it, continuity!

Andy Serkis Is Klaw in Avengers: Age of Ultron. CALLED IT. (Although I am saddened that Serkis is not Strange, since he was my “if it had to be a white dude” pick.) And Linda Cardellini and Julie Delpy are in it as unconfirmed roles that are probably not Carol Danvers and Jessica Drew.

The Rock will be voicing the male lead of Moana—which includes singing. Um. Scream, for both Disney casting actual talent of Polynesian descent for Moana and the Rock being in anything.

The 2015 Hugo Award nominations have been announced. More on this next week, as noted bigot and writer expelled from the SFWA Vox Day is nominated twice as an editor and the conversation on that is just gearing up. But Miss Marvel and Rat Queens have been nominated, so that’s great.

In more heartening news, Jo Walton’s Among Others won the 2014 James Tiptree Jr. Award, which it shares with Monica Byrne’s The Girl in the Road.