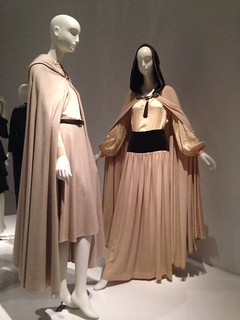 The museum at the Fashion Institute of Technology is amazing and 1000% free. I could get used to this. I’ve been in the throes of spring cleaning—I even made a dry erase calendar and notepad for my newly arranged writing nook—and enjoying the new pace of my blogging life. It’s working out great.

At The Awl, Haley Mlotek quotes Renata Adler in a post about Vogue and I think my head just blew off:

I’ve been reading the new Renata Adler collection of essays and she said one thing about cultural criticism that I cannot stop thinking about. Wait here while I go get the book.

Ok, found it. This is from her essay “On Violence: Film Always Argues Yes,” originally titled “The Movies Make Heroes Of Them All” and was published in the New York Times in January 1968.

The motion picture is like journalism in that, more than any of the other arts, it confers celebrity. Not just on people—on acts, and objects, and places, and ways of life. The camera brings a kind of stardom to them all. I therefore doubt that film can ever argue effectively against its own material; that a genuine antiwar film, say, can be made on the basis of even the ugliest battle scenes; or that the brutal hangings in The Dirty Dozen and In Cold Blood will convert one soul from belief in capital punishment. No matter what the filmmakers intend, film always argues yes. People have been modeling their lives after film for years, but the medium is somehow unsuited to moral lessons, cautionary tales or polemics of any kind…Movies glamorize, or they fail to glamorize. They cannot effectively condemn—which means that they must have special terms for dealing with violence.

At The New York Times, playwright Rachel Cusk reflects on having teenage daughters. This links up very well with my conception of spiritual violence as an inherent part of motherhood, as Cusk looks at the power imbalance between parent and child.

The Girl with All the Gifts’s film adaptation has announced its cast. I’m most excited for Arterton as Miss Justineau.

The Russo brothers (lately of Captain America: The Winter Soldier) might be directing both installments of Avengers: Infinity War.

Zayn Malik left One Direction and the whole world shuddered. Have some puppies.

Filmmaker Sophia Fiennes is directing a documentary about Grace Jones, which I’m going to need on my desk yesterday. I’m very excited.

Nasim Pedrad, lately of Mulaney and soon to be of Scream Queens, is developing her own show for Fox. You know what? Pound the alarm. Pedrad is hilarious and has more than enough charisma and acting chops to anchor a fantastically weird comedy show.

Josh Gondelman at BuzzFeed talks about his grandmother’s newfound Patriots fandom after being diagnosed with lymphoma. He touches on the emotional intersection between fandom and religion, which I always find interesting.

Audra McDonald will be playing the Wardrobe (named Garderobe) in the live-action Beauty and the Beast. So… it’s definitely maybe a musical and I’m going to bet that Disney will be significantly retooling the furniture’s roles.

Spectre will receive an IMAX release. I’m THERE.

Bill Hader has joined the cast of Spielberg’s BFG. Lovely!

South African comic Trevor Noah might be taking over The Daily Show. I like this idea, largely because Noah’s mild-mannered comedic voice seems like it could translate quite well to the kind of bemused outrage Jon Stewart’s The Daily Show is known for.