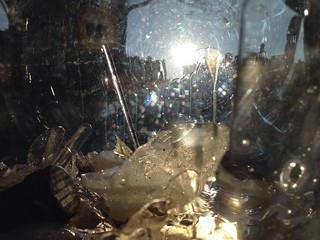 Spring appears to be returning—or, at least, the sun, for which I am heartily grateful. I saw Cinderella on Friday, which… well, you’ll see my review soon. (As well as another programming note.) But my Cinderella viewing experience was lovely, as I inadvertently taught small children that clapping is appropriate at movies.

“Without Faith, Without Law, Without Joy” is a short story by Saladin Ahmed about a Muslim man trapped in an English epic poem. It is wonderful.

Renay pointed me to “Coding Like a Girl,” an essay about gendered expectations and feedback in technical communities. The main takeaway? “Give feedback based on content. When you think something is distracting during a presentation, ask yourself, do you really mean that you are just not used to seeing this in a presentation? Ask yourself, “Would I give this feedback to a masculine-presenting white cis man?”

This tumblr post about the AIDS epidemic and the need for this current queer generation to be educated about this important part of our past is a great resource.

“To Survive on This Shore” is a project that photographs and interviews older transgender and gender variant people.

Star Wars’ first canonical lesbian is an Imperial officer named Moff Mors. Look, I know Moff is a title in the Empire, but you couldn’t give her a slightly different rank?

At The New York Review of Books, Frank Rich reviews Richard Zoglin’s Hope: Entertainer of the Century and discusses Bob Hope’s career and cultural impact—especially his current lack thereof. I’m always trying to get a broader historical grounding in American comedy, and this was very useful.

Sony is also making an all-male Ghostbusters film. The worst part is that it has a ton of great people attached—Tatum! The Russos! Drew Pearce!—and I will never, ever give it any money. I imagine this is because Sony can see its half-hearted Spider-Man empire slip through its fingers and wants to utilize the franchises it actually has versus any specific desire to cater to screaming dude-bros, but. You are still, in the end, catering to screaming dude-bros. (So the plan is that we all see Ghostbusters a thousand times each and don’t go see this until we can rent it from the library for free. Or pirate it, whatever, I’m fine with pirating if it’s in PROTEST.)

Power Hour is a new AV Club feature that takes musical artists and creates an essential sixty minute set of their music. I still prefer blasting through discographies on Spotify, but this is going to be so useful! First up: Madonna. (Have I mentioned how much I love early bratty club kid Madonna? Because I do.)

At The Art of Manliness, learn various ways to end a conversation, even one you wanted to be a part of! I particularly love the two drink solution.

Sachin Teng is an amazing artist. I love the abstraction and geometry of his work. It’s slightly mechanical but more organic than anything else. It’s stunning. Legend of Korra fans will appreciate his “Prophet” piece.

To celebrate International Women’s Day, Sight and Sound asked critics and curators to nominate their favorite female film critics. The assembled list of twenty-five is astonishing, passionate, and a little tear-inducing. I have so many new books to read!

Lifehacker reminds us that new projects means finding time, which means giving up something else or reprioritizing. This is important for me to remember, especially because the amount of things that I want to do now exceed both my time and energy. (Thank God it’s socially acceptable to wander around New York looking like you’re mildly offended that other people exist. Such fantastic cover for introverts trying to get away.)

Sir Terry Pratchett passed away on Thursday. Jo Walton remembers him at Tor.com. This hit me harder than I’d thought. I haven’t read a ton of Discworld, but Good Omens was a major part of my first foray into independent, determined reading. Godspeed, sir.

The first Star Wars spin-off film has been confirmed as starring Felicity Jones (and has a release date of December 16th, 2016). Title? Rogue One. Conclusion? AWESOME.

Andy Samberg is hosting the next Emmys! Yes, good.

Books
Purchased: None
Added: Red Velvet Seat edited by Antonia Lant, Men, Women, and Chain Saws: Gender in the Modern Horror Film by Carol J. Clover, From Reverence to Rape by Molly Haskell, Deadline at Dawn: Film Criticism 1980-1990 by Judith Williamson (all via Sight and Sound)

Films
Purchased: None
Added: Back in Time (via The Mary Sue)