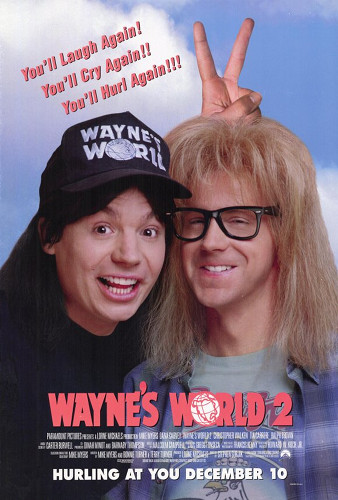 I think Mike Myers invented teenage boys. Specifically, both flavors of teenage boy that I encountered in my childhood seem traceable back to him—the just under the wire snarky Gen Xers known as my brother and his friends, as well as the masculine Millennials I actually went to class with. Both variants were capable of easy charm and smug, self-satisfied snark; the difference was the ratio. As someone roughly a decade younger than her older brother, I was not privy to the exact ratio those frost-tipped Gen X boys had, but it was certainly more balanced than the Millennial snots I actually suffered through class with. (Were they all snots? Probably not, but boys were afraid of me in middle school. As nature intended.)

Wayne’s World and Wayne’s World 2 both have that same kind of charm and smugness, but it works in Wayne’s World because the smugness comes across as a production team simply delighted that they get to make this movie—Mike Myers bringing Wayne to the big screen, Tia Carrere getting a chance to play a well-rounded female lead in a big summer movie, and director Penelope Spheeris getting to do a comedy. There’s a bit in the brief behind-the-scenes featurette on the Wayne’s World DVD where Myers talks about how he and Carvey had to figure out how Wayne and Garth, previously always seated, walked, and he simply lights up at that little detail. (Myers went for the subtle front half of a centaur gait.) Plus, Wayne’s World never feels like it’s punching down; Wayne and Garth rarely goof off at the expense of other people. I mean, it happens, don’t get me wrong, but they’re just as much the butt of the joke as other people.

Wayne’s World 2, however, is almost all smug, self-satisfied snark. Is it because the turnaround between both films was, frankly, absurdly quick? Is it because the gentling punk rock hand of Penelope Spheeris is absent? Is it because the movie forgets that Wayne and Garth enjoy their lives as is? It’s because of all of those things, and more.

The basic premise—Wayne and Garth decide to put on a concert in Aurora, Illinois, called Waynestock, because Jim Morrison told him to in a dream—is sound. In fact, it’s there that the film is at its best. Wayne Campbell is never more Wayne Campbell when trying to decide whether or not to go back and put up the concert or go stop the woman he loves from marrying another man as Garth and his buddies mimic his frustrated movements. But the film argues that Wayne is jealous of Cassandra’s success, as embodied by a slick Christopher Walken as a producer trying to seduce her away from her band, her home town, and her boyfriend. I don’t mind a little backtracking if it takes a new and interesting direction. What if Cassandra started getting jealous that Wayne gets to do whatever he wants creatively without a producer breathing down his neck?

But the direction Wayne’s World 2 takes is… well, let’s call a spade a spade: it’s blatantly racist. In its barrage of pop culture references (to name a few: Jurassic Park, the 1971 “Keep America Beautiful” ad campaign, Thelma and Louise, and The Graduate—like all good Saturday Night Live comedy romances), it settles upon kung fu movies. Namely, it introduces Cassandra’s father as a poorly dubbed businessman who disapproves of Wayne being involved with his daughter until Wayne bests him in a kung fu fight. Which ends with Wayne kicking him in the groin to a gong sound effect, as two brass balls fall out of his pocket. This subplot downgrades Cassandra’s agency as a character—the wedding comes out of nowhere to service the The Graduate pastiche—and revels in Orientalist nonsense under the guise of “homage.” It’s infuriating. Almost as infuriating as the use of the affable Larry Sellers as “the Weird Naked Indian” who silently guides Wayne to Jim Morrison and gets a ton of flack for wearing a thong.

It’s almost worse that this is a sequel to such a charming, likable movie, because I know that they can do better. And they do here, in very rare moments. Garth gets a subplot about being seduced by an older woman who wants him to murder her husband, and the seduction goes about as poorly as you can imagine: “Take me, Garth.” “Take you where? I’m low on gas and you need a jacket.” The always welcome Tim Meadows makes an itty bitty cameo as Sammy Davis, Jr. And the ending captures the lackadaisical, DIY spirit that makes Wayne’s World so appealing in any incarnation.

It’s just the rest of the movie that fails to.

(Sidebar: I would have paid cash money for a dance-centric romantic comedy starring Tia Carrere and Christopher Walken in the early nineties. Alas that I was confined to my baby walker, being a baby.)

My roommate rented this DVD from the public library.