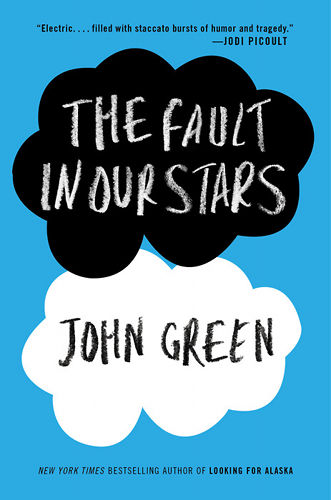 The Fault in Our Stars
by John Green

The thing about my incredibly long lead time on most media (imposed on me by both library wait lists and my own reticence to do as I am told) is that I get to see both the thing itself and the response to it. When The Fault in Our Stars dropped in 2012, it was hot. White hot. So white hot, in fact, that even while I was working at the Tattered Cover a year later, we could barely keep the damn thing on the shelves. (To be fair, the post-humously constructed Esther Earl memoir This Star Won’t Go Out had just been released, boosting sales.) I still have the occasional waking nightmare of the rickety overstock stacks I had to make over the John Green section in the young adult nook. Tumbling, bright blue, entirely hardcover overstock stacks.

But, to quote The Dark Knight, The Fault in Our Stars has lived long enough to become the villain. Specifically, John Green has. Where he was once recommended to me, he’s, of late, been side-eyed. Some of it is his own behavior—Green’s misjudged breathless declaration that the kiss in the film adaptation of The Fault in Our Stars is the first lady-initiated kiss in ALL OF CINEMATIC TEEN ROMANCE, anyone?—but a lot of it is how the work of a cisgendered straight white dude is being used by the mainstream to legitimize young adult fiction. (Which is not his fault, obviously, but is still something to take into account.) This backlash eventually came to his books, especially The Fault in Our Stars. After the film hit, I saw many a tumblrina rolling her eyes at “metaphors,” although I had no idea what they were talking about.

So when I finally got around to reading the darn thing, I was prepared for the worst. After all, I did not care for Will Grayson, Will Grayson, his collaboration with David Levithan, whose work I otherwise enjoy. And fifty pages into it, I may have immediately texted a known Green unfan of my acquaintance that Augustus Waters was a total turd.

I mean, come on. He’s perfectly fine when introduced as complete candy for our heroine, sixteen-year-old cancer patient Hazel Grace Lancaster, during a church-sponsored cancer support group. And then he walks outside and apparently makes to light up, prompting Hazel to chide him for managing to screw up being a dream boy, but he doesn’t. The cigarette, he explains, is a metaphor.

Further turd-like behavior continues—complimenting Hazel on her dress by saying that girls don’t wear dresses anymore (???) and that only a girl like her would think to turn the word “pedophile” into an adjective. It’s praising Hazel by singling her out from other girls in a way that insinuates other girls are inferior to Hazel, which sidles too closely to a romanticized version of excepto-girl syndrome. In fact, Augustus and Hazel have a touch of excepto-teen syndrome—where their identity is occasionally based on negating others, inside of affirming themselves. I’m sensitive to this. I saw the world entirely through that filter throughout my adolescence, much to my harm and isolation, and I don’t like to see it repeated in literature aimed at young adults. I would have greatly benefited from the consumption of media that didn’t default to a conflict-based theory of human interaction (or the Geek Social Fallacies, but now I’m getting too far afield).

But, damn it, The Fault in Our Stars got me in the end. Hazel, for all her poor taste in men, is a relatable and angry heroine. All the best moments in the novel balance living with cancer and being a teenager perfectly, and the lion’s share of those moments are Hazel’s. She prowls Facebook to find out everything about Augustus and his ex-girlfriend, but she relates to the deceased ex-girlfriend because she knows that wall tribute is her future. She’s painfully aware of how much time she has left on this year, but still watches America’s Next Top Model marathons with her mom. And when she gets the opportunity to travel to Holland to meet the author of her favorite book in the world, she tells her lungs to “keep your shit together” (128).

Plus, Augustus gets taken down a notch or two—he gets hurt on a trip for his precious metaphors, and Hazel calls him out on it. And his desire for his death to be meaningful, knowing full well that a meaningful death the way he defines it is rarely afforded to even the most able bodied. It’s a bit too little, too late, but I really do appreciate that Hazel finally lets him have it.

I’m glad I finally got around to The Fault in Our Stars, which I downed on Friday in three different sessions. I even almost missed my subway stop, which rarely happens. So: you got me, Green. You got me good. But I don’t know if I’m sticking around for anything else.

6 thoughts on “Review: The Fault in Our Stars”