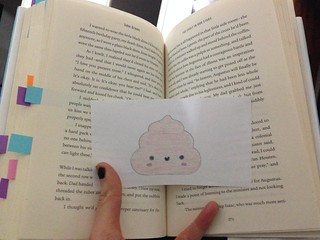 Somebody left a drawing of a cute turd in my library copy of The Fault in Our Stars. I left my awesome bookmark in the book, but I think you’ll agree that this is cooler.

Naomi Alderman, one of the co-creators of fitness app Run, Zombie, talks about exercise, morality, and her experience as someone who loves exercise but has never lost weight doing it at Medium. She talks a lot about how fitness should be about getting in touch with your body instead of competing with yourself (or society), which I love. I really loathe exercise narratives that focus on punishment, supposed sexual appeal, and the like. As Alderman says, you don’t need to earn the right to feel good in your body.

Jam of the week: “I Really Like You.” Carly Rae Jepsen returns from the summer of 2012 to make a stab at the summer song of 2015, and it’s super-cute. Even—okay, especially—with a line like “Who gave you eyes like that? Who said you could keep them?” “Uptown Funk” will probably reign as supreme as “Get Lucky,” despite being released in November (that feels wrong), or it will just ascend into perma-summer, much like “Call Me Maybe.” LET IT BEGIN.

You can win a trip to the premiere of Age of Ultron with Robert Downey Jr. by donating ten dollars to Julia’s House.

Here’s Aidy Bryant hanging out with a dog. Your day is better already.

Hayley Atwell once tweeted that she did a whole fight scene with “Anaconda” playing in her head. A fanvidder took it to heart, and this might be my favorite video ever.

Autostraddle recommends nine lesbian and queer comedies you might enjoy! Imagine Me and You is uproariously cute.

The Lambda Literary Award finalists have been announced; check ‘em out.

EA has shut down Maxis, the video game studio that brought us SimCity and, of course, The Sims. It looks like development on The Sims will continue in a smaller studio devoted solely to that franchise, but man. May princes sing you to your sleep, Maxis. You were my childhood.

Luke Evans will be playing Gaston in the live-action adaptation of Disney’s Beauty and the Beast. And Dan Stevens will play Beast.

Friend of the blog Renay shares her experiences editing Speculative Fiction 2014 and the struggle for including diverse voices.

The London edition of Madame Tussaud’s will be hosting a Star Wars exhibit in May, featuring wax figurines of Luke, Leia, and Han. I writhe with jealousy, of course, but I’m also fascinated by the existentialism of it—the barest hint of a possibility for Hamill, Fisher, and Ford to interact with their former bodies. Whoa.

Diablo Cody will be writing the Barbie movie. Approved.

Sweet Briar College is closing down due to financial difficulties—a stunner to its students, faculty, and alumnae, who weren’t even contacted to offer help. Sweet Briar is obviously quite similar to my beloved Agnes, and the student stories being shared highlight the value of both a small liberal arts college and a women’s college. (Although my Scottie eyebrow is raised at some of these Vixens, who occasionally call Sweet Briar a girls’ college. The bellowing of “It’s a women’s college!” was practically an art form in my college comedy troupe.)

Who forgot to tell me about ABC’s Broad Squad, which is about lady cops in the seventies? Well, Rutina Wesley will be playing Joanne, one of those lady cops, who is hiding the fact that she is gay.

Nishta Mehra at Guernica discusses how her family—an interracial lesbian couple with an adopted black son—puts the lie to the idea of post-racial America. Fascinating.

Warner Brothers CEO Kevin Tsujihara has described DC’s characters as “steeped in realism.” Is it possible to laugh so hard you throw up?

Okay, here’s a good DC thing: check out the Supergirl costume for the CBS show! The palette’s a little dark, but I am loving that neckline and those tights.

Author Jay Kristoff writes about how the Firefly crew are really the villains of their story.

Books
Purchased: None
Added: Persona by Genevieve Valentine (via her existing)