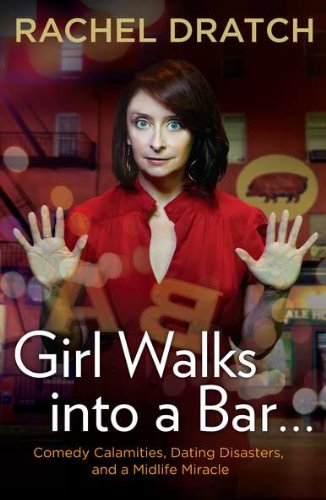 Girl Walks Into a Bar
by Rachel Dratch

Hear ye, hear ye—my Saturday Night Live fandom has only grown more passionate over the last two years. Captain Cinema and I have at last escaped Chevy Chase on our tour of the entirety of the show, I may or may not finally satisfy my morbid curiosity about Studio 60 on the Sunset Strip, and I am starting to feel like I’m ready to crack open my pristine copy of Live From New York to read it chapter by chapter. And so begins my descent into the various literary offerings concerning Saturday Night Live and its children.

Rachel Dratch predates my Saturday Night Live cast; I began watching in 2007 (and thus will always have warm, fuzzy feelings about Casey Wilson, so, you know, Gone Girl was fun) and began watching seriously in 2010. But even though she left the show in 2006, I was always aware of her through her most famous character, Debbie Downer, the occasional E! rerun of early aughts episodes, and being regaled with several repeat performances of “Lovers” on my college trip to Ireland. Not so much through her post-Saturday Night Live work, which is a shame, since she’s a delight.

Dratch opens her 2012 memoir Girl Walks Into a Bar by directly addressing why she’s not been getting high-profile (or any work), especially because some of that is tied up with her getting replaced on 30 Rock with Jane Krakowski after the role changed significantly. (Dratch is fine with it, lest you think she starts off the book by throwing shade at Tina Fey.) Namely, she’s Hollywood Homely, to the point that the roles her agent usually find for her see her playing the mother of women her own age, monsters, or grotesque women. (Cringingly, Dratch refers to the latter as lesbian roles, although she is explicit that she’s referring to Hollywood’s horrified vision of butch women instead of actual human-type lesbians. Still.) This is madness, of course, because Dratch is a fantastic comedian.

Case in point: Dratch detailing her years doing improv and sketch at Second City. Her affection for her favorite kind of comedy is palpable. She treats “Yes, And,” that cardinal rule of improv, as a good guideline for life. Improv, to me, is a most terrifying form of comedy, as it requires trusting other people, so it’s to Dratch’s credit that she makes me understand the performative appeal of it. Girl Walks into a Bar has the requisite Saturday Night Live material (including Dratch’s difficulty adapting her collaborative writing process to the more isolated process of sketch writing), but it’s not so much about her work as a comedian. Largely, it’s about her decision to get back into the dating game and dealing with an unplanned (in the sense that she was convinced she couldn’t get pregnant in her forties due to a lot of variables) pregnancy.

While Girl Walks into a Bar reads about the same as most non-writer creative type memoirs do—it’s breezy, it’s bite-sized, but it does definitely sound like her—the dating portion feels a little rote. At a certain point, Dratch narrates a date by adopting popular pick-up artist lingo, which may have been cute while she was writing it in 2011 but reads much differently just four years later. When it comes to memoirs, I can’t fault them for playing into certain narratives. I mean, it’s their lives, for Pete’s sake. Some narratives are pervasive because they are common (common does not equal normal).

Nonetheless, it’s always a relief to find people just making their way in the world in a way that makes sense to them. The best stuff is when Dratch talks about her unconventional family, starting with meeting a lovely (but, le gasp, Republican?) man in her forties and then getting pregnant (practically a medical miracle) six months into their relationship. Negotiating pregnancy, co-parenthood, and the early stages of dating all at the same time is a challenge, but one that Dratch deals with as best she can. Take, for instance, her trying to cope with the parade of unasked for parenting advice—when she mimics one said advice giver, she devolves into meowing.

Oh, and the best Saturday Night Live lady story? Tina Fey being “German” about emotions is a fantastic detail, but Amy Poehler snarling at a condescending waiter for telling her she can’t drink while hugely pregnant wins the day.