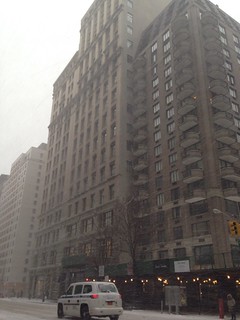 Well, at least the winter storm that barely brushed New York City gave me a day off work to catch up on my writing. I’m just regular behind, not crazy behind now. I also got my hair colored to my exacting standards (the resultant pin board features lions, golden retrievers, Captain America, and pre-Raphaelite paintings), which is different but pretty cool.

In what I hope to Yinsed is the third installment in Disney’s aggressively lady-focused, dude-apathetic trilogy of live-action remakes of classic animated films (I suppose we’ll see how Cinderella turns out), Emma Watson will be playing Belle in Beauty and the Beast. Huzzah!

Genevieve Valentine breaks down the fashion at the SAG Awards and how it plays into star narratives, with great jokes.

Disney is making noise about rebooting Indiana Jones and is considering Chris Pratt for the lead role. Hmm. Perhaps?

POUND. THE. ALARM. Ghostbusters: The One Clare Likes has semi-announced its cast. Melissa McCarthy is locked down, while Kristin Wiig, Kate McKinnon, and Leslie Jones are in the end of negotiations. I can’t deal with this, it’s too beautiful. These might be details (ugh, McKinnon and Jones as a prepackaged ghostbusting duo, my heart); July 22, 2016 is the official release date. GO SEE IT A THOUSAND TIMES. Maybe studios will just start rebooting everything with all ladies.

There have already been three trans women of color murdered in 2015. KaeLyn at Autostraddle talks about the difference in the coverage of these three women and the coverage of Leelah Alcorn’s suicide.

And a queer Latina teenager was killed by police in Denver. Un. Acceptable.

At BuzzFeed, Chenjerai Kumanyika talks about the white-coded “public radio voice” and his attempts to negotiate that as a black man in podcasting.

As God is my witness (given that I’m buying my WorldCon membership next year), we are going to heave together and get Gavia Baker-Whitelaw the Fan Writer Hugo she richly deserves one of these years. For those of you lovely people who can nominate this year, here’s a list of all her eligible material.

At The Dissolve, Scott Tobias talks about revisiting films and the supposed monolithic nature of critics’ reviews through the metaphor of things shifting during flight. This is hugely important; a text and a reader never touch the same way twice.

Queer NYC geekery! FlameCon’s date is set—June 13th—and tickets are available now! $20 for a con ticket, $25 for a con and party ticket until Valentine’s.

Hellcat will be showing up in Jessica Jones, as played by Rachael Taylor. Awesome!

Renay reviews The City of Stairs and has a lot of important things to say about texts that kill off their only queer character:

I’m tired of seeing people like me be dead. I’ve killed enough of myself in my own writing and I’ve seen enough of people like young queer me — alone and marginalized — killed in fiction to be utterly heartsick over it whenever it crops up to follow the same tired ruts in the storytelling road. I’m not afraid of us dying, but when we’re marginalized in our own lives, and come to fantastic narratives only to watch our people die, where, exactly, is the escapism for us? Where’s the entertainment? If none of us survive to go on more adventures, if there’s only one of us, instead of three or four, so the death might actually mean something other than repetition of a terrible narrative pattern, how is this a positive?

Did you know that Marvel produces a commentary podcast to go along with Agent Carter? Because I did not!

Magic: The Gathering’s next set will feature the character Alesha, Who Smiles at Death, who is also a trans woman. Huzzah!

Imgur has released a new tool that allows users to make .gifs from any video online. That is going to come in incredibly handy.

Have an amazing profile of Dorothy Allison from 1995.

Jennifer Senior at New York Magazine talks about what’s left behind when someone becomes self-employed. I’m fascinating by how the work-life balance is warped, although I am definitely biased as someone who needs routine and predictability in her life.

It’s not just men who reveal their assumptions in this way. Being underestimated — by men, by women, by themselves — is something most women have in common. We have to work harder from the outset to resist being dismissed, to attain equal footing, and then to maintain it. It’s endless, repetitive work, cut across and intensified by yet other assumptions based on accent, skin color, class, education, dress. And it’s a powerful thing, the learnt reflex to look at a woman and see someone who is by definition unaccomplished, a novice; someone’s disciple, companion, muse; someone with no power or expertise of her own. I’m not immune to it — I’ve caught myself in the act of underestimating women, of having assumed that the woman in the room isn’t the expert in the room. It’s a reflex so disturbing to notice that it’s tempting to pass over it in silence. But it’s a reflex enabled by the shocking paucity of women of authority and expertise across all media — a paucity not easily registered, so used are we to it.

An Oberlin student’s Winter Term project is compiling a searchable database of diverse sff. There are only seven hundred books listed so far, so go contribute! This could be a really amazing resource.

Screen Crush’s Jacob Hall remembers the now generationally unique experience of being terrified by horror cover art in video stores and asks several film writers to remember theirs. And, in between, he reflects on what streaming video has done to movie art and cinephilia:

Netflix is an amazing service, but I’ll never forgive it for straight-up murdering the place where my most primal childhood fears grew into my greatest passion. With its scatterbrained organization and profoundly lacking library, it’s easy to get frustrated while browsing Netflix, but it’s impossible to get, well, lost. Those tiny images on the screen, laid out so cold and sterile, lack the immediacy of an actual shelf. Those thumbnails don’t leap out at you. They blend together. Instead of being captivated by something gruesome or original or scary, you simply keep on scrolling, eventually deciding to watch another episode of ‘Friday Night Lights’ instead of something new.

In other words, Netflix has made me a lazier movie watcher.

Films
Purchased: None
Added: The D Train (via the Dissolve), Starter for 10 (via Pajiba), The Incredibly True Adventures of Two Girls In Love, Saving Face, Nina’s Heavenly Delights, I Can’t Think Straight, Desert Hearts, But I’m a Cheerleader, Itty Bitty Titty Committee, Pariah, Laurence Anyways, The World Unseen (via this tumblr post), Rock ’N’ Roll High School (via the Dissolve), How To Succeed In Business Without Really Trying (because I am obsessed with this commercial), Turbo Kid (via io9)