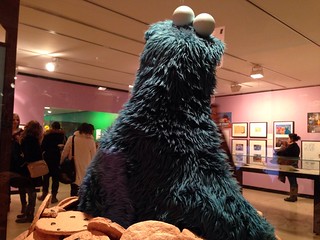 I went to the New York Public Library for the Performing Arts yesterday to see their “Somebody Come Out and Play” exhibit about Sesame Street. I was really fascinated by some of the artifacts—a 1969 script for the first episode, which includes a Solomon Grundy joke—but it was great to see some of the Muppets themselves in person. For instance, I had no idea that Cookie Monster actually has two-toned fur that’s been dyed blue, so the roots are a little darker. (And my identification with Cookie Monster continues…)

A delightful Brothers McLeod animation about the production of “Warszawa.”

Hannah Ongley at Styleite refutes the notion that female nudity is inherently sexual. (NSFW photos at the link.)

Watching American Sniper in the theater is an immersive, ultimately cathartic experience — but it shouldn’t be. Every war movie should make you feel like shit. Indeed, every war movie I’ve seen over the last decade, with the exception of Zero Dark Thirty and American Sniper, has made me feel like shit, in part because the man for whom I began watching those films was killed in Fallujah in 2004.

This is an app that will find a public restroom near your location. FINALLY!

Bonjour, Cass is dead, long live Queerly Seen! Friend of the blog (and generally awesome type human being!) Cass is taking her game to the next level with a new blog featuring everything she is good at and passionate about: queer literature, queer representation in media, and politics. Go! Follow! Enjoy!

Maya Dusenbery at Pacific Standard dissects a study positive about marriage to get to the gooey horrors of how America does middle age.

Picking through this article about making friends in middle age linked from the above article led me to this quote, which explains so much about the processing of making friends:

As external conditions change, it becomes tougher to meet the three conditions that sociologists since the 1950s have considered crucial to making close friends: proximity; repeated, unplanned interactions; and a setting that encourages people to let their guard down and confide in each other, said Rebecca G. Adams, a professor of sociology and gerontology at the University of North Carolina at Greensboro. This is why so many people meet their lifelong friends in college, she added.

At The Atlantic, David Ludwig explains why we’ve all “suddenly” soured on Johnny Depp.

Tariq Khalifa at The Daily Dot highlights Muslim comedians working in the Middle East, in order to combat the idea that only the West uses humor to mock Al Qaeda and the Isalmic State.

At Esquire UK, Max Olesker undergoes a twelve week exercise boot camp to better understand the spornosexual, the ripped heir to the metrosexual:

At this point, it’s worth clarifying the nature of “metrosexuality” as Mark Simpson originally meant it, that is, not as shorthand for “bloke who uses moisturiser”. “Metrosexuality is, in a paradox that Wilde would have relished, not skin deep,” he told The Telegraph. “It’s not about facials and manbags, guyliner and flip-flops. It’s not about men becoming ‘girly’ or ‘gay’.” Rather, it’s about the young-man-as-mediated-individual.

Hand in hand with that concept of the newly mediated male, BuzzFeed’s Isaac Fitzgerald experiments with makeup for a week and reflects on the results:

I know I won’t take to wearing makeup every day—I can’t even put it on myself, and I’ll be damned if I ever get into the habit of washing it off every night.

But I enjoyed how my eyes sat up to attention when ringed with mascara. I liked the way my lips glistened after they were covered in lipstick. (Foundation probably isn’t for me, but that might just be because I haven’t found my shade yet.) Most of all, I found wearing makeup to be an interesting experiment in self-presentation—something I don’t often get as a dude who’s been dressing the same way for years.

This week of makeup made me conspicuous in a way I wasn’t used to. Not only was it a continual shock to see my glossy and high-contrast face, I had to deal with how everyone felt about it. How I felt about it. How the makeup was at odds with the way the rest of me looked, how the makeup didn’t even have to be heavy to make people feel weird, how I felt weird and smothered and self-conscious despite myself.

For many, makeup is comfort. Makeup is fitting in, it’s feeling attractive, it’s standing out in ways you choose to stand out. On the last day, despite all the strange vibes and awkwardness of the week, I finally felt that too.

The amazing Arabelle Sicardi writes at BuzzFeed about cosmetics, its uses, and how queer is more than just a sexual orientation:

That’s what fascinates me about makeup: its ability to help you actively become, however temporarily. It’s making what you need to survive out of what you have to work with. Ask the girls who don’t feel quite themselves without doing routine, filled eyebrows before they leave the house. This processing of potential, pushing past the point of expectation of who you have to be for other people to reach who you want to be for yourself — that’s beauty, gone queer. Because queerness is sexuality, yes, but it’s also an identity that implies resistance and reaching for something else. Something better for us than what we’ve found in a society that would have us be anyone but ourselves.

Anne Helen Petersen takes the idea of the It Girl to task:

When I first saw the Rosamund Pike cover, I thought I was annoyed because of the misapplication of the term. Pike, I thought to myself, is no Clara Bow. But as I’ve thought more about the term, it’s become clear that maybe I’m just subconsciously irritated by the way in which popular magazines wield the term as the ultimate backhanded compliment.

Because it’s one thing to look back at Bow, and analyze, understand, and bemoan her It-ness, a label that simultaneously elevated her to the height of stardom and anchored her asunder. It’s another to see the term — and all its insidious, objectifying power — resurface, proliferate, and thrive nearly a century later. Only this time, it’s saddled not on one woman, but any woman who seems primed to be more than an object — an It, passive and pliable — in the narrative of their own lives. And that’s nothing to be celebrated on the cover of a magazine.

Simon Pegg is co-writing Star Trek 3. Count me down as tentatively hopeful.

Foz Meadows wrote a very long essay about masculinity and gender in Teen Wolf, and it’s absolutely fantastic. I’ve dropped off from Teen Wolf ever since [REDACTED], but it’s lovely to hear that it’s still much more interested in Scott being a good man than anything else.

American Netflix users, don’t forget about Lifehacker’s Flix Plus Chrome extension! It tweaks a lot of little things, like stopping Netflix from showing that pop-up menu when you hit the credits.

Sophie Turner is Jean Grey—and Alexandra Shipp is Ororo Munroe and Tye Sheridan is Scott Summers in X-Men: Age of Apocalypse. Turner is amazing, first of all, and I’m really interested to see what she’ll bring to Jean. Especially an eighties teenager version of Jean. (Like Rock of Ages before it, X-Men: Age of Apocalypse appears to be a film created out of my foggiest daydreams.)

SkyMall files for bankruptcy. I am torn between my childhood nostalgia for it and the basic economic sense of discontinuing a magazine nobody ever buys anything from.

BuzzFeed declares its commitment to feminism. I LOVE YOU, BUZZFEED.

Jam of the week: “Pray to God” by Calvin Harris featuring Haim, which threatens to break out into the dreamier portions of “Don’t Stand So Close To Me” while referencing Asia.

BuzzFeed’s Amanda Shapiro looks at bikini bodybuilding, a new division in bodybuilding competitions that tries to tone down the sculptural excesses of the sport and appeal to more women. It also has a huge presence on Instagram. It’s a really fascinating article.

Films
Purchased: None
Added: Seoul Searching (via The Dissolve)