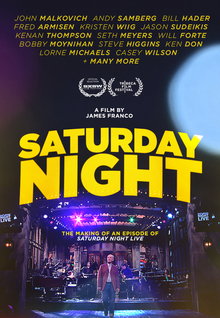 Here’s the wonderful thing about nonfiction: as long as you’re interested in the subject, the piece itself doesn’t actually have to be that good. If it’s truly awful, of course, then it’s bad, but passion—from either the creator or the consumer—can elide a multitude of sins. Mark Cousins’ epic documentary The Story of Film might turn off some viewers with his voice, but I have grown incredibly fond of his soporific Irish cadence. (To the point of an impression. Ladies.) Case in point: James Franco’s Saturday Night.

As a documentary, it’s not particularly advanced. Captain Cinema and I groaned when the documentary switched to black and white and then had the camera slowly zoom in. (“And this,” I intoned, “is how he died.”) It utilizes black and white haphazardly and, for some reason, is so inordinately fond of starting the audio of the next scene before cutting from the current one that it’s so noticeable. Even the utilitarian title cards make it feel like a film student’s second or third crack at the bat, especially when Franco uses them to complain that they couldn’t get the rights to Prince’s “I Would Die 4 U” for a scene where Bill Hader is lip-syncing along. Otherwise, though, it’s basically competent, and the structure of Saturday Night Live’s highly formalized and ritualized production week does a lot of work for him.

This means that Saturday Night is only really engaging if you already really like Saturday Night Live and/or are fond of the performers highlighted here. (I mean, there may be people who might like Bill Hader or Casey Wilson and not like Saturday Night Live. Although I do assume that there are no people who like Seth Meyers and dislike Saturday Night Live, given that he was head writer for a decade or so.) It’s for a very specific audience, which is why its release on Hulu, after kicking around the occasional film festival for the last few years, makes a lot of sense. Late in the documentary, Steve Higgins states one of the facts about the show: whatever cast was on the show when you were in high school is your cast in a way no other cast can be. The cast featured here is my high school cast, so it appeals to me differently than it does a fan who was in high school ten or twenty years ago. I get to see people I already love and whose work I already love do their jobs and do them well.

For instance, I’ve always been fond of Seth Meyers—his evolution from performer on Saturday Night Live to its head writer reassures me about my own evolution from student actress to loud writer. But it’s really interesting to see him at work, gently organizing and shaping the show and, more dramatically, writing the wonderful J’accuzzi sketch in an hour. (Alas, we are robbed entirely of Amy Poehler, as she was on maternity leave, although we recognized her beautiful cackle when the documentary covers Weekend Update rehearsal.) Given John Mulaney’s currently rising star, it’s fun to see him in his first few years as a writer, particularly seeing how well he and Bill Hader riff off of each other. Will Forte and Fred Armisen are the other writer/performers who get screen time, especially as the documentary is quite taken with how Forte gets to yell at host John Malkovich in an Empire Carpet sketch. Alas, it was cut, but this documentary preserves as much as it can. For my part, I particularly mourn the loss of Horsecops, a sketch whose only remnant is a thundering and long introduction narrated by Jason Sudeikis. (“They co-created Murphy Brown and established a rival White House with the proceeds” slays me dead.)

Saturday Night does touch on the not so pleasant parts of putting the show together. (I will admit to being a little pleased to see that the Saturday Night Live offices look like any other office in an old building.) This season was Bobby Moynihan and Casey Wilson’s first season; Moynihan stayed and became a delightful force of nature, while Wilson left after her only season. They present a sketch at table read that absolutely bombs, and Wilson shares with Franco her insecurity about performing on Saturday Night Live with people who are so good at what they do, even though she’s quite aware that she was considered good enough to get onto the show. The only reason this documentary will survive the test of time is the fact that it gets to look the curtain, but good on Franco for using his powers for good.

I watched this film on Hulu Plus.