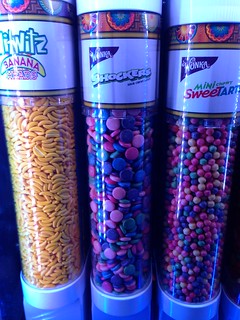 You have to understand that seeing these many Shockers at once is like a dog finding a bin full of nothing but treats. I used to burn my tongue off with these. (Not any more, obviously, as I am now the one responsible for my dental bills.) Ah, sense memories.

DC is giving Vixen her own animated series? I’m so pleased!

Rumor has it has that Sophie Turner and Saorise Ronan are being considered to play Jean Grey in X-Men: Age of Apocalypse, while Alexandra Shipp and Zendaya Coleman are being considered for Storm. Ronan certainly has the eyes of a telepath, but can you imagine Turner in ‘80s gear? BECAUSE I CAN. I’m not as familiar with Shipp and Coleman, but, of the two, I propose Shipp as Storm and Coleman as Dazzler.

The Mary Sue presents ten films directed by ladies that you should check out in 2015. Jupiter Ascending, you and I have a date.

Genevieve Valentine launches into the award season with her red carpet rundowns, starting with the Golden Globes. As ever, perfect.

Autostraddle’s Mari lists off ten ways to be a positive ally to trans folk.

To celebrate the show’s 40th anniversary, the Premier exhibition center in New York will be hosting a Saturday Night Live exhibit. I’ve already signed up to be notified when tickets go on sale.

And if you need to catch up, VH1 Classic is airing every episode of Saturday Night Live in reverse chronological order from January 28th to February 15th. SCREAM (she screamed, having neither the time off nor the cable).

Y’all know that Renay and Ana (of the Book Smugglers) have started a new podcast called Fangirl Happy Hour, right? I am almost caught up with my 2014 podcasts and can’t wait to start on this.

The Oscar nominations dropped Thursday. To put it lightly, it’s… it’s a conservative year. To put it correctly, where the pluperfect hell are Selma’s other nominations? (Also I think The LEGO Movie deserved a shot at Best Animated Picture, but that’s, like, several thousand ladder rungs below Problem #1.) Take it to the chorus, film world:

Lightspeed Magazine’s special Queers Destroy Science Fiction! issue has been funded thrice over on Kickstarter, which is awesome. Feel free to kick more dollars their way or, more importantly, CONTRIBUTE!

While What We Do In The Shadows will be screened in New York and Los Angeles sometime soon (she said, refreshing the Sunshine Cinema page again), Jemaine Clement and Taika Waititi have taken to Kickstarter to try and get it into seventy other theaters in the United States.

This 2011 New Yorker article about IKEA is fascinating and goes in-depth into both the corporate culture and how it ends up affecting you as a customer. (There’s a reason those throw pillows are in those giant tubs!)

Kim Brooks left her son in the car for about five minutes on an errand and ended up being investigated by the police for child endangerment. Her essay about this experience touches on parenthood, the level of risk inherent in just existing, and changing ideas about how much supervision a child needs. Having been a child who was so supervised that I was stunned to realize that, at age eighteen, I could potentially die without my mother being the first to know, this really made me think.

Books
Purchased: None
Added: Running a Thousand Miles for Freedom by William and Ellen Craft (via Jezebel), Saturday Night Live: The Book by Alison Castle (via have you met me)

Films
Purchased: None
Added: Appropriate Behavior (via the Dissolve)