This feels right? This feels right. I really love the Week in Review concept—it’s easier for me to conceptualize time in weekly chunks, which is probably why we invented calendars—so it just makes sense to expand it to my annual look back at the year that was. Of course, now that I’ve expanded into reviewing films (rest assured that I, tone-deaf and cheesy synth-addicted, will never branch out into reviewing music), I need some way to tie together my two year-end lists. (Two! I feel all fancy.) It’s been a very good year for me, both generally and pop culturally, so my first top ten film list was much easier than anticipated. 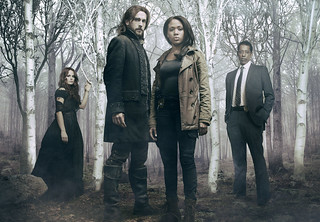 Sleepy Hollow, I must apologize. You brought the bonkers I was expecting, but with so much more heart, humor, and grace than the majority of your competition. Hats (or should I say heads?) off to you, you lovely show you.

…a shoujo anime from the nineties treats its female characters better than Guardians of the Galaxy does. That’s because Sailor Moon filters so many superhero tropes through the lens of preteen girls. The monsters of the week, especially at first, are all predicated on that audience’s fears, from failing in school to becoming famous to losing friends. And roll your eyes all you want at Usagi’s friend Maru falling in love with a villain much older than she is (because I was), the show still takes time to respect her depression after he dies.

It’s childhood as remembered constructed out of a childhood that actually occurred—which is what all childhoods ultimately become.

It’s a beautiful, painful film about so many things—growing up, trying to take responsibility for yourself, and, my favorite, becoming a whole and real person. (Look, it’s the world’s first comparison between The Goose Girl and Saturday Night Fever! And, undoubtedly, the last.)

Ultimately, Frank lures you in with its dark comedy and high-profile cast, but leaves you with little to no answers about the events that unfold and what they imply about art. It’s unsettling, as my experience proves, but that also makes it the kind of film that stays with you.

And those are the films worth watching.

As AV Club commenter solesakuma notes over in the film’s Spoiler Space feature, Marvel “[takes] the emotional issues of their characters seriously… but they take their world-building and general tone in a lighter, funnier way.” Captain America: The Winter Soldierdoes not spend time attempting to prove that, say, Sam Wilson’s EXO-7 Falcon wing pack is realistic or exactly how the ultimate fate of Armind Zola happened. These are important parts of the stories, but the film is interested chiefly in the emotional truths of its characters and their efforts against a regime that believes fear is the only way to secure freedom.

There’s some narrative movement to Only Lovers Left Alive—especially when Ava, Eve’s impish, impulsive, and destructive sister comes to visit—but it’s largely languorous, a hang-out film of the highest order. Jarmusch is only marginally interested in the vampire as a predatory figure. Instead, what interests him are the consequences and gifts of eternal life: the ennui, the depression, and the greater appreciation for the world it can bestow. Adam and Eve’s aesthetics have been sharpened over centuries in their respective artistic passions, to the point that Eve, packing to meet Adam, takes only books to read to him, touching them as tenderly as children. It’s tempting to render them as creatures of pure intellect, but they’re sensualists, pure and simple.

But the story remains firmly Charlie’s evolution from a character struggling to surface in the face of so many emotions and so much pain—both his own and the pain that he borrows, because he believes that is what love is—to a character ready to be an agent in his own life. And Logan Lerman plays Charlie perfectly. When the AV Club recommended this film, several commentators scoffed at the idea of three regulation hotties being the outcasts, but Lerman gives Charlie exactly the right energy—painfully sincere, emotionally jittery, and just a little off. It comes out in the haphazard ways he reveals the tragedies of his life, his increasingly ineffective coping mechanisms for his depressive episodes, and the almost distancing respect with which he treats his friends. While Lerman was actually older than Ezra Miller, who plays Patrick (and does so to the hilt), his Charlie is undeniably young. While the whole film is extraordinarily well-cast, even a slightly off-kilter Charlie would ruin it. With Lerman at the center, it flies.

With these wonderful bones in place, Bong elaborates with stunning concepts, from the sheer madness of the upper classes on the train (who pause a bloody battle in order to celebrate New Year), the self-contained nature of the train, to Curtis himself. Chris Evans has expressed (as much as he can) his discomfort with the claims playing Captain America has his on career, but he’s manipulating that image so well. The film sets up Curtis as the hero, with his chiseled jaw and piercing blue stare, and spends the rest of it painfully disillusioning of that idea. Watching Curtis make increasingly cruel decisions until he finally makes the right decision is the greatest action set piece of the film.

Attack the Block, harking back to the low-fi action movies of the eighties, largely focuses on the action inherent in a teenage gang fighting off an alien invasion in their South London housing estate. But while it does include a young, conventionally pretty, and white female lead to soften the focus (and complicate our viewpoint of the leads, since the film opens with them mugging her), it never loses sight of what’s truly harmed these boys: toxic narratives about what it means to be a man and a culture that sees them as threats instead of people. That’s what leads them to kill the first alien that lands, putting everything into motion. It’s only through the rare opportunity to play the hero (albeit through circumstances they created, which the film and the characters own) that the boys—sharp Dennis, slightly kinder Jerome, hangers-on Biggz and Pest, and their leader, John Boyega’s tight-lipped Moses—actually begin to escape from and recognize those narratives.