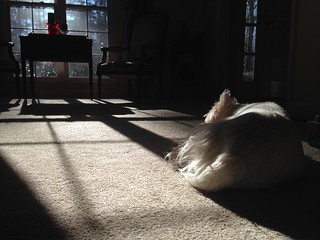 Happy holidays to you and yours! I spent a few days down South with my family, which was nice, despite being sick for most of it. I always feel weird in the last days of months and years, so I’m just biding my time until Wednesday.

When you look at something like the Battlestar Galactica reboot, you can tell they tried to make its costumes look modern and realistic rather than “futuristic” or alien, but ten years later it’s already starting to look a little dated.

I don’t see this as a problem, though. You can’t predict what future audiences will find aesthetically pleasing, and the important thing is that the costume design fits coherently with the rest of the worldbuilding. Plus, there are other constraints like budget, and what the director/showrunners think is an acceptable aesthetic for the work as a whole. BSG’s costumes are still excellent in context, and the gradual change of real-world fashion tastes won’t change that.

At Splitsider, Devin Klos talks about Stephen Colbert, the centrality of his faith, and the way he communicates it:

Many years ago, I worked as an intern at The Daily Show. It was among the happiest achievements of my young life to that point. I was more than a bit star-struck to be in a space among so many people I respected and admit to being tongue-tied and feeling unworthy in such company. One afternoon, Stephen Colbert came in to the office. His show was about to premiere so he hadn’t spent much time in our studio. As he walked past me at my cubicle, he stopped and said, “You’re a new face, what’s your name?” I didn’t know what to really say, so I replied, “Oh, I’m just an intern.”

Colbert looked at me a moment and then said: “Just an intern? Hey, look, everybody starts somewhere. I was just an understudy at one point, but that’s just a point in time. It’s not about where you are now, or even where you hope to go, it’s who you are that matters. I’m Stephen, who are you?” I introduced myself and we shook hands. “Don’t let your place in the world dictate who you are to anyone. We all have the same merit.” Then he was gone, but his words lingered.

Morgan Leigh Davies reviews Whiplash and discusses the concept of the Lone Male Genius, especially in terms of how he lacks a community in a way that actual artists don’t.

So you may have heard about the supposedly ambiguous finale of The Legend of Korra. (Ambiguous only to those who did not grow up using pattern detection skills to bolster their own ships.) But co-creator Bryan Konietzko has confirmed that it was, in fact, that. I am being vague because spoilers, although I will say Konietzko talks about the ambiguity and how that affects the series finale as representation.

Lily Herman at Lifehacker offers a script for writing fan mail without coming off as clingy. I’m going to try to be better about communication in the new year, so this should come in handy.

Justin Lin will be directing Star Trek 3. Vroom vroom. (Get it? Because he worked on Fast and Furious?)

Katie Schenkel at The Mary Sue talks about how The Nightmare Before Christmas is about cultural appropriation and how the film can lead to positive discussion with young uns on that topic.

DC has confirmed that all its upcoming films are part of the same universe. …yes, DC, we assumed.

Sandra Allen at BuzzFeed talks about her childhood love of the musical RENT, romanticism, fairness, and death.

The Verge’s nascent feature Does It Hold Up? (which is basically just the AV Club’s Memory Wipe, which just means it’s a fundamentally solid idea) has Adi Robertson considering The Handmaid’s Tale in its second installment with beautiful, damning results (for our culture, not for the novel):

Almost any American I know would condemn Atwood’s patched-together hellscape. But plenty of people, male and (less often) female, think that pointing out anything but the most egregious misogyny is silly, distracting, anti-religious, or “misandry.” Women are 50 percent of the population, but let them get 33 percent of speaking time in film instead of 17 percent, or 30 seats in the Senate instead of 20, and we’ll be living in a matriarchal nightmare. We can’t even imagine what an equal world, a world where men and women face the same dangers, get the same opportunities, and have the same amount of power, would look like. To some extent, that equality probably isn’t even possible. But we’ve thrown ourselves into pretending that we’re already there, making do with an idea of egalitarianism where women are grudgingly tolerated, and the pay gap, abysmal rape statistics, and consistent underrepresentation in most of public life are simply matters of personal preference. If we can’t even be trusted to name the obvious, how can we say with any conviction that we’ll be able to recognize a dystopia when we see one?

Matt Zoller Seitz at RogerEbert.com despairs of the lack of criticism specific to a text’s medium and asks critics to also consider the form of something, because that form is important. I’ve been thinking about this lately, because I always spend some time thinking about why stories are told in one medium and how they have to be translated to another.

Tim Wu at The New Yorker talks about the economics of air travel, specifically that the more perks airlines offer, the less incentive they have to improve basic air travel.

David Fincher is directing an HBO pilot about music video production in the 1980s. Which is weird, because it is nowhere near my birthday.

Books
Purchased: None
Added: The Serpent by Jane Gaskell (via Fandom!Secrets), The Penguin Book of Witches by Katherine Howe (via Genevieve Valentine at the Book Smugglers), Between Women by Sharon Marcus (via Feministing), Dear Committee Members by Julie Schumacher (via Code Switch)

Films
Purchased: None
Added: The Price of Gold (via Code Switch), Dragon Blade (via io9)