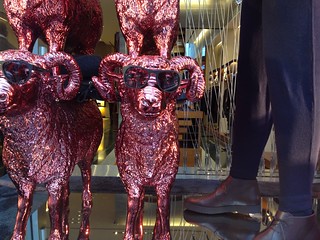 The good Captain and I went to Manhattan yesterday to go goggle at holiday displays, and I discovered this near-perfect representation of myself. Nobody knows you’re a metallic pink ram in sunglasses on the Internets.

I haven’t quite decided where to put my holiday pay it forward gift yet, but Autostraddle has created a list of twenty-five queer and trans comic creators that you should go support this holiday season. What a great idea!

Scuh-ream! Help Us Great Warrior is becoming a print comic in February! Go pre-order and throw all your money here.

Jason Bailey at Flavorwire examines the death of the mid-budget film:

Film’s loss is TV’s gain — for now. But is television an acceptable substitute for the scale and scope of a major motion picture? The budgets are often scarcely better than those low numbers on the indie model, and it’s a very different type of storytelling, open-ended, rarely working towards the kind of satisfying conclusions a great movie can offer. Plus, few get the kind of control over an entire series or season that Soderbergh, Lynch, Solloway, or Fukunaga do, making it much more difficult to establish an authorial voice and style. And filmmakers who don’t yet have Soderbergh and Lynch’s clout will most likely find network suits even less intellectually and experimentally accommodating than their film-exec counterparts. Even the warm embrace of HBO couldn’t keep Mike White’s Enlightened or Christopher Guest’s Family Tree on the air; ditto Frank Darabont’s Mob City on TNT.

23 Jump Street might cross over with Men in Black? I mean, I’m 100% down, but that seems so out of left field.

The glorious Sam Weber is illustrating Dune for The Folio Society. I don’t even like Dune that much, but Weber’s art is so amazing that I’m excited. (Also, everything at the Folio Society is disgustingly gorgeous. I want all of them.)

All the year end round ups have afforded me a lot of awesome recommendations, including introducing me (shamefully late) to Azealia Banks. In penance, “Chasing Time” is this week’s jam.

I had no idea the new Le Petit Prince adaptation would utilize different art styles and highlight Saint-Exupéry’s famous illustrations—let alone feature a female protagonist in the framing story. Delightful!

Leah Schnelbach at Tor.com destroys Exodus: If You’re From Ancient Egypt, Why Are You White?. In taking the long view of the film, she actually proves whitewashing is just the tip of the iceberg—she also takes it to task for being a completely unimaginative adaptation of the Exodus story and explores what makes a good adaptation of religious lore:

This just brings up the larger problem with adapting stories from the Hebrew Bible and New Testament, though. These stories adapt and evolve with us. When Exodus was first written down, it was a story for the Hebrew people to celebrate their cultural and religious heritage—essentially the origin story of an entire nation. It was a story of their people, and explained them to themselves. It reaffirmed their particular relationship with God. As time passed, and Christianity ascended, the story of Passover particularly was used to bring comfort to a people who were now being subjugated, not by foreigners or infidels, but by people who claimed to worship the same God they did. The story then transmuted again as enslaved Africans, indoctrinated into Christianity, applied its teachings to their own situations, and drew hope from the idea that this God would be more just than its followers, and eventually lead them out of their own captivity. In light of this history, how can we go back to the old way of telling it? How can we tell a tale of a particular people, when the tellers themselves seem more invested in making the plagues scary and throwing 3D crocodiles at us? How can this be a story of freedom when so few of the slaves are freed?

If we’re going to keep going back to Biblical stories for our art, we need to find new ways to tell them, and dig in to look for new insights. Darren Aronofsky’s Noah also strayed pretty far from its source material, but in ways that added to the overall story. It makes sense that Noah is driven mad by the demands of the Creator. He also dug into the story to talk about ecology, our current environmental crisis, and the very concept of stewardship in a way that was both visually striking, and often emotionally powerful. It didn’t always work, but when it did, he made a movie that was relevant to humans right now, not just a piece of history or mythology. If you’re going to make a new version of a story of freedom, you have to take into account what this story has meant to thousands of people, and what it could mean to us now rather than turning it into a cookie cutter blockbuster with no moral stakes or purpose.

Every Frame a Painting is such a good series, and Tony Zhou returns to analyze action comedy through Jackie Chan. I learned a lot about fight choreography!

Cereal Killer is a shop in London that just sells cereal and cereal-related items. Given my allegiance to Lucky Charms and Honey Nut Cheerios (and the tooth-rottingly wonderful concoction I make out of the both of them, Lucky Clares), I need to go if I ever end in London for any reason.

Jonathan Frakes is letting it known that he would love to direct Star Trek 3. Make it so! (I’ll show myself out.) I

Rebel Wilson and Jennifer Lawrence are being heavily rumored for Ghostbusters: The One Clare Likes. I’d love a little more racial diversity, but funny ladies busting ghosts? I’m there already.

These four pieces about rape, rape culture, and justice are linked in my mind:

The ever-wonderful Genevieve Valentine has kindly put together a round-up of all of her writing from 2014.

Katherine Cross at Feministing discusses the dance of learning from establishments that hate you:

Being a minoritized writer or scholar entails little rituals like these. You become quite efficient at it — it becomes second nature and you hardly notice the pinpricks anymore. It’s just one more way you have to be twice as clever. If you are a woman, or a person of color, or a trans person with intellectual aspirations, your road will be lit by many a spiteful lantern. You must engage with texts written by people that hate you, whose ideas may even have been used to proactively harm people like you.

J. J. Abrams has started to reveal the names of the characters of Star Wars: The Force Awakens—via digital Topps trading cards, which is adorable. I correctly predicted Kylo Ren’s name, in that my Valkyries and I have long deemed film characters too stupid to live “Kyle,” after the lead in Wolftown. Darth Kyle here has clearly taken his life into his own hands, and I think it’s a poor decision.

Model Beverly Johnson has come forward about her near-rape at the hands of Bill Cosby, a story that is too familiar these days. I’m linking to it because Johnson discusses her reasons for coming forward now:

Finally, I reached the conclusion that the current attack on African American men has absolutely nothing to do at all with Bill Cosby. He brought this on himself when he decided he had the right to have his way with who knows how many women over the last four decades. If anything, Cosby is distinguished from the majority of black men in this country because he could depend on the powers that be for support and protection.

Shonda Rhimes’ speech at The Hollywood Reporter’s Power Woman Breakfast is a heartening acceptance speech that takes into account that increasing diversity in media is a group effort.

At Autostraddle, Beth teaches us about Pamela Colman Smith, the woman who illustrated the Rider-Waite-Smith Tarot deck (the most popular Tarot deck in the world).

Every time I see a New Yorker grumping their way through their commute on the subway for subway-related reasons, I want to grab them by the shoulders and tell them that we are so desperately lucky that our public transportation system is so far-reaching and awesome. Case in point: Atlanta’s MARTA still has trouble expanding because communities keep balking at the idea of “unsavory” characters getting access to their communities. GARGH.

This cute but technically fussy short article on Tolkien, Sindarin, and Welsh is a fun little read. I’ve been making French a priority these days (read: I do my Duolingo every day), and better understanding how a language is put together has been helping me with that, so it’s fun to read about the grammar systems of other languages.

Kathleen Gilje’s 1998 painting “Susanna and the Elders, Restored” is a meticulous recreation of Artemisia Gentileschi’s 1610 “Susanna and the Elders” with a key difference—Gilje’s underpainting, shown at the link in x-ray, shows Susanna screaming and brandishing a knife while at the mercy of her attackers. I found this through a tumblr post that erroneously assigns Gilje’s work to Artemisia herself, which shows how potent this image is. Gilje also fascinates me, as an art restorer who uses it as a base for her own art. It’s thoroughly in my wheelhouse.

Mortician Caitlin Doughty, the founder of The Order of the Good Death, is so cool, and I didn’t even know until this BuzzFeed article about mortuary school that she’d written a memoir! Have a taste (of the article, not the memoir):

Doughty calls this “death denialism” — the uniquely American belief that death can be overcome, or at least ignored, for a very, very long time. Here extension of life is the ultimate imperative, and illness, an opportunity: to persevere, to marathon, to win. If we must die, then we will do so privately and tidily, ushered quickly out of the hospital or home, out of the hands of our families and into those of sanitized professionals. If we are to see a dead body it must be made up to look living, puffed up and painted, hands folded peacefully across the chest.

As a result, our perspective is blinkered. We don’t treat our time as finite; we gulp down our resources and our days because we don’t really believe they’ll run out. To quote just one of a number of gorgeously stern passages in her book: “Corpses keep the living tethered to reality.” In other words, our inability to deal with death is ruining our lives.