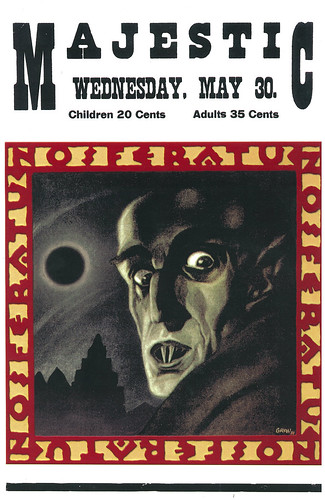 Nosferatu
based on Dracula by Bram Stoker

I have trouble watching silent films.

I learned this during an aborted attempt to watch every film adaptation of The Three Musketeers possible in college. I discovered that the old timey The Three Musketeers I had rented from the library was not, in fact, the one with Gene Kelly but a silent film, which stopped me dead in my tracks. It’s impeded me greatly in my efforts to understand film on a similar level to the way I understand prose. (Similar, not the same, as prose is essentially my native medium.)

What stops me is the perhaps one of the purest examples of urtexting: I am so used to consuming and analyzing sound films that removing what I feel is such an integral element of film leaves me utterly adrift. Of course, it’s not even removing—I’m speaking entirely from my vantage point in 2014, where all films have sound, a lack of score can be utilized as breathlessly as its presence, and Giorgio Moroder once scored Metropolis entirely with the hits of the eighties. (It’s nice to know that other people score the world the same way I do.)

But silent films weren’t silent. Musical accompaniment was recognized immediately as an important part of films, and was usually provided live. Japan’s early cinema even had a specially designated narrator, the benshi, who voiced the characters onscreen. Wikipedia lays blame to film schools of the sixties and the seventies, which wanted to focus on the visual medium purely, for the silencing of silent film, but there are also a lot of fun passive-aggressive citation needed notes on there, so who knows. They also weren’t silent because there was no such thing as home viewing in early cinema, unless you were fabulously wealthy and fabulously weird. It’s only later that film started becoming an individual experience. For me to understand silent film, then, I had to understand that what I would consider the entire film was, in fact, just one element of a triad composed of film, accompaniment, and company.

So I’m really glad that my first silent film experience incorporated all of that. For Halloween, Captain Cinema and I—dressed as comedians dressed as musicians—went down to Videology to see Nosferatu, with score provided by the wonderful Tenth Dimension. How wonderful? They incorporated jester hats into their spooky, evocative score. Gorgeous. Everyone in the audience was engaged and playful, undoubtedly aided by Videology’s film-themed drinks. (Alamo Drafthouse Cinema Brooklyn, I love you, but you are not here yet. I’ve already determined that I will split time between the two.) There’s nothing like seeing a film with people who want to be there.

Something so communal thus cannot be repeated. My reviews have been getting more personal as of late, because I grow less and less interested in whether or not something is objectively good (spoiler: people are subjective, objectivity is a lie) and more and more interested in how and why certain people respond to certain texts. (I mean, I’m still going to point out when a book fails to do what it sets out to do. Madame McBride raised me right.) Any of my reviews, like any review out there in the world, captures my response to a text at that time. What makes reviews—good and bad—so alluring is the simple pull of comparing notes with others.

However, that requires a more or less fixed text for us to take notes on. Nosferatu, surprisingly, isn’t a more or less fixed text. There’s something magical about the fact that early film—despite its seemingly calcified age—is almost more alive and human than some films that come out today. Nobody was thinking about preservation at the time, so even the most up-to-date print of Nosferatu available still clearly has human marks on it. Scenes dyed one way in one print jump color when they’re stitched together with footage recovered from a totally different print. It’s snatched from the jaws of history, like some of the best things in the world. All of these poetics is to say that I don’t feel able to review something that isn’t fixed and that relies on atmospheric variables to a degree unheard of in modern film. Some experiences are best left to memory and the ether. (It’s a very rare number of experiences, but there you are.)

But I can say that Nosferatu, despite the campy-to-us silent film acting, still, almost a century later, still has the power to chill you to your blood. One sequence in particular made me forget the pressure of my hair trying to squeeze my head to death underneath my wig and pay attention to my goosebumps: the death ship sequence. Max Schreck’s otherworldly Nosferatu dispatches an entire ship in a fit of gluttony, and its pacing, reveals, and timing are still perfect. “The deathship has a new captain,” the film’s intertitle declares, and it spooks as much as it did in 1922.

I saw this film at Videology.