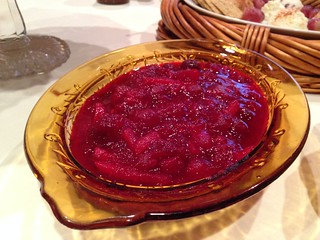 I hope you had a happy Thanksgiving, fellow Americans! I spent it at my mother’s house, cooking up a storm. I made the above cranberry orange ginger chutney, as well as a pumpkin spice cake with dairy-free caramel sauce. Because I made the caramel sauce with almond milk, it didn’t thicken at all, so I ended up slathering pumpkin butter on the spice cake and then drenching it in caramel sauce.

I am a genius. I highly recommend doing the same.

Michael Brown’s murderer will not face charges. I am disgusted.

The AV Club Newswire has a long history of being both news and occasionally astonishingly good writing. Sean O’Neal reports on the Cosby rapes by schooling us all in the difference between innuendo (as Cosby calls the allegations) and fact.

Niamh Hayes & Richard Seymour at Jacobin decimate philanthropic capitalists, Band-Aid, and gave me a new way to look at charity:

Traditionally, one would say that charity is used to mitigate the symptoms of social distress, while leaving its systemic causes intact. Here, it is not even relevant whether the symptoms are soothed. The important thing is the spectacle.

Christoph Waltz may be playing Blofeld in the next James Bond movie. The Church of Bowie is mildly positive on this.

FlameCon, New York’s first queer Comic Con, has been funded! I have got to get tickets.

Oscar Isaac will play Apocalypse in X-Men: Days of Apocalypse (which will contain half of my favorite X-Men movie). Um. Isn’t Apocalypse from old timey Akkaba? You know, in Jordan? Oh, wait, he totally is.

Michelle MacLaren is confirmed to direct Wonder Woman. What is this feeling? This begrudging respect for the Wonder Woman project, despite it being from DC Studios? It burns!

In the sixties, when Batman was all the rage, there was a club called Wayne Manor. That’s amazing.

This is how Marvel is going to trick me into buying the Agents of SHIELD comic—this supercool variant cover for the first issue featuring a ton of female characters.

Dancing with the Stars’ season finale featured this adorable and amazing Mario-themed freestyle number set to a remix specifically made for the show by Nintendo. It’s so energetic and thoughtfully choreographed to reflect side scrolling action games.

Ridley Scott’s latest excuse for the whitewashed biblical epic Exodus: Gods and Kings? That a film starring “Mohammad so-and-so from such-and-such” wouldn’t get funded. Those are his actual words. Pass.

“What’s your name, sweetheart?” “Agent.” PEGGY CARTER IS EVERYTHING. There’s another short trailer that features Peggy talking to other ladies here.

The Society of Illustrators in New York is hosting an exhibition of the works of illustrators Diane and Leo Dillon. This write-up on Tor.com about their work is really fascinating, because it talks about how they so valued their ability to mimic other art styles instead of cultivating ones of their own. It’s a really different perspective on art in such an individualistic society.

Anna Kendrick defended feminism and admires the women being targeted by GamerGate this week.

She-Hulk has been canceled, and Storm might be next. #SaveStorm is organizing to save Ororo’s self-titled series. Comixology is giving away digital copies of the first issue; details here.

Guillermo Del Toro has confirmed that the nerd squad (of Gottlieb and Geiszler) will be back for Pacific Rim 2: Kaiju Bluegaloo.

There’s a new Jem and the Holograms comic, and artist Ross Campbell has redesigned the band. It’s much more the platonic ideal of the eighties than the show itself, but I adore that all the girls look great and have different body types! Yay, body diversity!

While I was at New York Comic Con, I bought some lovely art from Cliff Chiang. When I told him how much I loved his work on Wonder Woman, he thanked me and responded that he was sad that he and Azzarello were leaving the comic soon. They did such a wonderful job with it that it is really disappointing to see how the book is faring under its new management. According to Molly Jane Kremer, it’s… it’s a doozy.

I was not raised on Star Wars. I did not even see Star Wars until I was fourteen, and then it took another six years for me to see the theatrical cuts and get it. And I still kind of got chills seeing Star Wars: The Force Awakens’ teaser trailer, from Boyega’s amazing entrance to Ridley’s also amazing entrance to that straight up dumb cross guard lightsaber. Scuh-ream. io9 has a shot by shot breakdown for you, if you are so inclined.

Guy Rundle at The Jacobin dissects Black Friday, Thanksgiving, and other social rituals of capitalism:

So in response to duty — to the alleged abandon disguised as duty — Black Friday has developed as the sly alternative. The activity is, by its very nature, as anti-Thanksgiving as you could get. Thanksgiving is, after all, a subject, even an abject celebration, in which one acknowledges submission to the whims of a distant God. Its role is in part to balance out Christmas and the practice of giving to children, in which non-reciprocity is celebrated: the child receives gifts without any expectation of reciprocal action on its part. The child’s role is simply to be. As adults we take our joy from that — Christmas Day without children is worthless and sad.

Dragon Age Inquisition includes a trans character whose gender is not even a deal! Huzzah!

Books
Purchased: None
Added: Mermaids in Paradise by Lydia Millet (via Salon)

Films
Purchased: None
Added: Let Him Have It (via the AV Club)