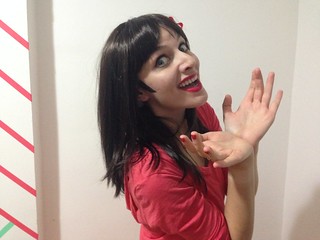 Kate Boosh lives! I see many iterations of Kate Boosh in the future, mostly because I always have the urge to dress up like Noel Fielding. My first New York City Halloween was nicely chill—I saw Nosferatu for the first time with live accompaniment and then went home to watch Ghostbusters, which I yelled at. A lot.

I was also at ladybusiness this week, crying about the The Avengers: Age of Ultron trailer with Renay. I kept making up even sadder material about Steve. It’s my hobby.

Usually, I try to do these in chronological order, but I spent most of my scant free time after work this week trying to get all my ducks in a row and then Marvel had to go and announce all of Phase Three, so it’s foolish not to start there.

So! Marvel announces Phase Three and the Internet flipped its lid:

Because the Age of Ultron trailer was leaked, they added more footage to it for its debut on Agents of SHIELD. Natasha demurring to determine her morality brings me to tears, because she’s worthy. She’s so worthy. She just doesn’t think she’s capable of being a good person. WEEP.

Here’s a clip from Age of Ultron of Steve and Tony arguing where Steve wins the argument by ripping a log in half with his hands.

And Benedict Cumberbatch might be Doctor Strange. There are many reasons why this is a safe, boring choice, but here’s one I haven’t heard elsewhere: Cumberbatch is a busy guy. Pedro Pascal’s schedule is wide open. C’mon, Marvel.

Meanwhile, the only good thing out of DC that I’ve heard this week is that Joel Schumacher is writing a comic sequel to Batman & Robin, based on the unmade Batman Triumphant. I am only aware of Batman Triumphant because Harley was supposed to be in it, albeit as the Joker’s daughter. (How would that work, exactly? Time will tell!)

Dan Rad has been knocking it out of the park lately, hanging out with entire pack of dogs, shooting a new movie, and taking the boring question of “Is it weird to be a sex symbol now?” and turning it into a teachable moment about how nobody asks Emma Watson that, because some dudes were counting down the days until she was legal. Vomit on them and great on Dan Rad.

Jordan Peele, of Key and Peele, is working on a straightforward horror film that will deal with “the fears of being a black man today.” Yes. This. Please.

Trent Hamm at the Simple Dollar talks about making room for your passion in your life, even if you can’t make money doing it. It’s an interesting and thoughtful piece (although the end is all about boosting his website, which is fair) about the realities of life. Saying “follow your passion” is one thing, but you need to pay the bills. It’s better to talk about how to balance those things and make smart choices—both about your time and about your job.

NPR’s fabulous Code Switch put together a list of all the major network family sitcoms about families of color over the years to ponder if this television season is truly the most diverse.

Hulu’s latest distribution deal with Viacom means that we’ll be getting Hey Arnold and Invader ZIM on Hulu Kids in the future. I will be revisiting Hey Arnold, although my kindergoth years are best left lost to history (she said, wearing all black).

The Washington Post’s Alyssa Rosenberg says that “Not all pop culture needs to be subversive,” centering particularly on the newly announced Fox Archie Comics live-action series:

I am all for film, television, novels and comics that genuinely undermine what we have come to expect on the screen and the page, and in doing so, help expand our understanding of what is possible. But to earn the title “subversive,” you have to genuinely challenge an established and important orthodoxy. And your characters have to be something more than merely unpleasant.

Some of Bach’s pieces may have been written by his long-suffering wife, Anna Magdalena.

The CW has ordered a series called Shakespeare’s Sisters, which is about a young William Shakespeare, Queen Elizabeth, and three witches. The Hollywood Reporter namedrops both Game of Thrones and Shakespeare in Love when describing it, so it and Gotham will be soon fighting for campy television love of my heart in the near future.

Zack Wahls, who so eloquently defended his mothers’ right to marry in the Iowa House of Representatives, is now overseeing The Rainbow Letters, a project compiling letters from children of queer parents. The project will be ultimately published, but if you have queer parents and want to contribute a letter, follow the link to Feministing.

Here’s our first look at Pride and Prejudice and Zombies.

Anita Sarkeesian was on The Colbert Report to talk about Gamergate! I can imagine being face to face with Colbert the character is an overwhelming experience, but she handled herself well and got him to admit to being a feminist. Huzzah!

Here’s Tom Hiddleston in a “This is what a feminist looks like” shirt for Elle UK’s first annual all-feminist issue. You’re welcome.

At BuzzFeed, Joseph Bernstein talks about the Library of Congress archivists who work (part-time!) on preserving and archiving video games for the library. I almost went to library school, so I may be biased, but it’s really fascinating and mind-boggling to see how dated a lot of the Library of Congress’ processes are. (Orange is the New Black had to be printed on VHS just to be included! Holy crow!)

Oliver Sava’s Big Issues column for this week at the AV Club ends up discussing Wonder Woman’s core characteristics and what makes her a superhero: namely, very active compassion.

The always flawless Anne Helen Petersen breaks down the appropriation and usage of the term basic in class terms. (Spoiler: it’s about class anxiety.)

What Is On Netflix is a simple website that lists movies available on Netflix by their Rotten Tomatoes or IMDb ranking.