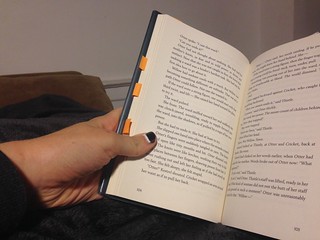 My first full week of work has left me with a burning need for better personal time management, but I’ll get there. I finished The Ten-Cent Plague and Sorrow’s Knot this week, and took in the Mulaney panel at the New York Television Festival.

Leslie Jones has been promoted to a featured player on Saturday Night Live! I’ve been so happy to see her in sketches here and there, so I’m delighted to see her join the cast permanently.

Captain Cinema and I have been watching Gotham. It is not very good. However, Jada Pinkett Smith as Fish Mooney is. And her audition involved her bringing in a young man on a leash. It certainly worked.

Here’s our first piece of official art for Disney’s Moana!

Alamo Drafthouse Cinema’s Tim League talks about his philosophy as a cinema owner, theaters as cultural spaces, and respecting the wishes of artists.

Billy Boyd will be singing the credits song for The Hobbit: The Battle of the Five Armies.

She-Hulk’s current title is getting canceled, ending in January. No! If only I’d had the disposable income at the time!

We Need Diverse Books is launching Walter Dean Myers award and grants. The grants will be awarded to unpublished creators working on diverse texts and raised through Kickstarter.

Renee Zellweger recently stepped out looking, le gasp, different than we remember, and the Internet has been awful to her. Anne Helen Petersen parses it out for us.

Emily Nussbaum at The New Yorker talks about “bad fans”:

For me, the canary in the bad-fan coal mine is still “Sex and the City,” a show that to this day inspires fans to complain that its heroine was no damn good. Carrie was selfish and a bad friend and needy and shallow. She had an affair! She didn’t deserve Aidan. She had the nerve to ask her friends for a loan. What was she thinking with that dirndl? Like “The Mindy Project,” the show was an allergic response to rom-coms and sitcoms, just as “The Sopranos” was an allergic response to mob stories and “The Office” was an allergic response to reality TV. For some viewers, the idea that her flaws were there on purpose, that they were the whole point, remains hard to swallow. But “relatability” is a trap—it’s a cage for artistic ambition. When it comes to role models, as Kaling herself suggested, we may simply be looking for love in the wrong places: instead of looking to the show, we should look to the showrunner.

Also at The New Yorker, Ian Crouch talks about Saturday Night Live’s longevity, despite constant predictions of its decline, and how that’s intertwined with live television.

Ancillary Justice has been optioned for television. As Leckie herself cautions, this probably means nothing, but it also means there’s a chance we’ll see a television show explicitly dealing with neutral gender.

Sleepy Hollow is adding Abigail Adams to its cast, as played by Buffy the Vampire Slayer’s Michelle Trachtenberg.

ABC bought a comedy from Maggie Carey, the writer and director of The To Do List, which I really loved. I’m delighted to see her get a long term project! She’s awesome.

Marvel was forced to release the Avengers: Age of Ultron trailer early, due to someone leaking it before its scheduled air time of Agents of SHIELD. (Which is great, because I am asleep when that show comes on. I do not care for it.) So have a watch, weep tears at the fact we’re getting backstory for Black Widow, and deal with the fact that you think Ultron is kinda foxy. Here’s io9’s shot by shot breakdown.

Warner Brothers is looking for a female director for Wonder Woman. That… would be awesome. If only I knew if I could trust you, DC.

This featurette for Into the Woods finally shows some singing. Anna Kendrick is, as I suspected, quite precisely perfect for Sondheimian speak-singing, but I was really charmed by James Corden and Emily Blunt’s harmony. I also feel like I knew James Corden can sing, but didn’t realize that until watching this. Oh, and Johnny Depp’s Wolf looks half-hearted and unsavory. Eh to that. Yeah to everything else.