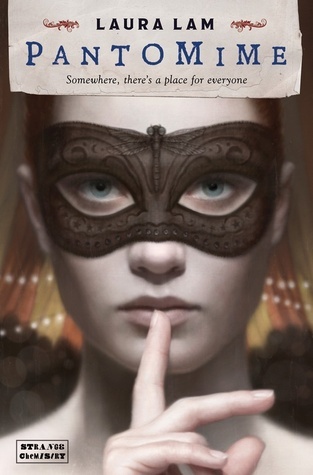 I go out of my way to interrupt any continuities in my reading. According to my house rules, I can’t read the same genre twice in a row, and, more often than not, I don’t read two books intended for the same audience one right after the other. Nonetheless, there are always through lines to be found in my reading. That’s how reading works—you’re the common denominator in all of it. You are the glue that makes the context.

The through line between Tell The Wolves I’m Home and Pantomime is the kind of secret that you cannot tell. In the former novel, June Elbus cannot bring herself to face her love for her uncle (okay, it is so much better than that description suggests); in the latter, Gene cannot confide the fact that he is intersex without fear, even in the slightly more broadminded circus he takes refuge in. (Laura Lam takes the welcome approach of using first person to avoid gendering Gene’s pronouns. We’re more aware of how people gender Gene than how Gene genders himself. However, given that Lam’s quick summary of her first book for readers uses “he” to refer to Gene as he finishes out the first novel, I’m going with that. Spoilers at that link!) Even expressing himself in a way that was inaccessible to the noblewoman Gene was raised as, he has to play a part to protect himself.

It’s these two parts—Lady Iphigenia Laurus, the noblewoman, and Micah Grey, a new aerialist for R.H. Ragona’s Circus of Magic—that the back copy refers to. The now defunct Strange Chemistry (once the young adult branch of Angry Robot) coyly insinuates that there might be two main characters. As the wonderful Cass ahs stated in the past, there are few things more frustrating to the diverse reader than vague, erasive back copy that promises as much as it obscures. I understand, especially when it comes to an audience who most likely have to run their purchases by their parents (or often have things purchased for them), the reason, but it’s interesting that Pantomime takes this tack when Gene being intersexual is central to the narrative.

Now, as we’ve been discussed recently, the Magical Queer trope is a destructive, reductionist trope for a reason. (Although it is true: I have superpowers. I have more tastebuds than you do.) I’m particularly remembering a panelist at the We Need Diverse Comic Books Panel at New York Comic Con this year who said that his favorite thing about Storm was that her power wasn’t her blackness. That said, while there is the implication that being intersex is why Gene has unique, if imperceptibly developed, magical powers, Lam does this in a way that makes sense. Like a lot of cultures on Earth, there’s a historical precedent in Ellada of two-sexed people being revered and possessing superior mental facilities. Gene is even given a little token of one such person, known as a Kedi, and often returns to it when contemplating himself, especially when he can’t confide in anyone else. What makes the difference is that we’re with Gene, every step of the way, and Lam delves unflinchingly into the issues that intersex people face today. Gene deals with his well-meaning but agency-robbing parents who want to, without his consent, perform an operation on him to turn him “fully” female, as well as his limited physical freedom in the supposed open world of the circus.

In fact, that’s the main story of this first installment in trilogy (although I have no idea who is going to be publishing the third one now that Strange Chemistry is kaput): how did Gene become Micah Grey? Pantomine irregularly alternates between the two timelines until Gene is on the run with a fellow circus performer, which spoils nothing. Except that Pantomime is more notable for its desperately needed and thoughtfully rendered representation than its narrative satisfaction. It’s those little touches that stay with me more than the overarching story: Gene trying to compromise before realizing that compromise is death. Gene trying to come to grips with his sexuality. Gene slowly, but surely, becoming his own man.