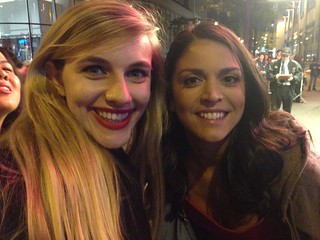 Okay, so that was last weekend, but it was kind of the greatest.

In other news that is not my Saturday Night Live love slowly creeping to take over my life again, I’m finding a new rhythm for my life, but it’s a rhythm that particularly suits my internal rhythms, so I’m looking forward to it. Plus, I can read on my commute. I love you, New York.

Stevie Nicks summons Haim to her, gives them career advice, and blesses them with gold moon necklaces. Perfection.

Batman was such a hit in The LEGO Movie that he’s getting his own spin-off movie. At least there will be a fun Batman somewhere in the world! (I mean, Gotham’s baby Bats is cute, but the show also finds a new way for him to self-harm every week, so that’s… you know… classy…)

Batman V. Superman: Grimdark Grimdark Grimdark will honor the recent reboot of Wonder Woman’s origins, by having her be Zeus’ daughter. BOO—also, holy crap, how does this square with religion? If Zeus exists, does that mean all deities exist? Or does that mean the Greek gods are the only gods? Or, more likely, the film will never address this. BOO.

Jam of the week: Daphne Guinness’ Bowie meets Gaga “An Evening in Space.” The video is NSFW, but is stunning.

Spider-Gwen is getting her own series! Huzzah huzzah!

Anita Sarkeesian was forced to cancel a public appearance in Utah due to death threats and the state’s open carry laws. This is disgusting.

A la carte HBO is coming next year for those without cable.

DC has announced that a Wonder Woman movie is go for 2017 and that Ezra Miller will be playing the Flash on the silver screen in 2018. Oh, no, now I have to see both of those—Wonder Woman because if that movie fails, people will blame female characters, not DC’s awful films, and the Flash because, well, Ezra Miller. Darth Vader no!

Neil Patrick Harris is hosting the Oscars! I will step up my suit game accordingly for whatever Oscar party I end up going to.

Author Kathleen Hale stalks a book blogger who posted a very negative review of her debut novel to the point of turning up at her house and then writes a self-pitying article forThe Guardian about it. I’ve read The Guardian article about it, but I’m not linking to it. A mean-spirited, scathing book review does not excuse the stalking and destroying a pseudonym created for the safety of the book blogger. Absolutely unacceptable.

I feel incredibly lucky to have found my apartment in New York. Tad Friend’s “Crowded House” is about the unbelievable story of a famed photographer who scams people out of their money by pretending to rent his apartment (to what feels like dozens of people at the same time) and is finally confronted when the would-be renters gang up on him.

The Sailor Mercury cosplayer from the Sailor Nerds walked by me last weekend at New York Comic Con, astonishing me, and then the whole group walked by. I’ve been knee deep in Sailor Moon feels lately, as I’m watching it on Hulu and just finished the first season, and I’ve really been loving how it feels like a subversion of the superhero media that I consume. (Of course, I’m willfully taking it out of the context of magical girl anime and placing it context with Western superheroes.) Seeing a group of gentlemen cosplayers whose genderswapped designs are really thoughtful and true to the material (instead of the “ha ha look we’re dudes in dresses” tone that I sometimes, despairingly, see) was a really wonderful moment. My hat is off to you, Sailor Nerds! Y’all are great.

I’m scared of people who look at someone like Zoe Quinn, an individual who makes free indie games, or Anita Sarkeesian, an individual who makes free YouTube videos, and honestly think that these women are a powerful “corrupt” force taking away the freedom of the vast mob of angry young male gamers and the billion-dollar industry that endlessly caters to them, and that working to shut them up and drive them out somehow constitutes justice. The dominant demographic voice in some given fandom or scene feeling attacked by an influx of new, different fans and rallying the troops against “oppression” in reaction is not at all unique. It happens everywhere, all the time.

And the myriad permutations this takes when it percolates down to the level of pop culture are fascinating.

Films
Purchased: None
Added: The Limey (via The AV Club), Big Night (via The Dissolve)