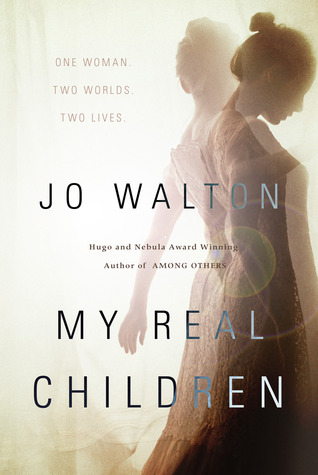 My Real Children
by Jo Walton

Jo Walton is an unmitigated genius.

Everything I have ever read by her—Tooth and Claw, Among Others, and the astonishing first two installments of her Small Change trilogy—has been consistently spectacular, so when My Real Children was first announced on Tor.com, I was over the moon. But over the course of my move, I lost track of it. Which is why it was meaningful to come across it in the new fiction section at my new local library. That’s in hindsight, of course; in the moment, I snatched it off the shelf and scurried home to binge read it.

My Real Children is the story of Patricia Cowan, an elderly woman suffering from dementia in 2014. Or is that 2015? Patricia’s memory is deteriorating rapidly, and she finds herself remembering two lives that overlap and differ in significant ways. In one life, Patricia was Tricia, wife to the cruel Mark but mother of four beloved children. In the other, Patricia was Pat, a travel writer who raised three children with her beloved biologist Bee. The novel opens and closes with the elderly Patricia, but otherwise tells Patricia’s life story, from her childhood and schooling (the same in both lives) to the divergence point (a marriage proposal cum ultimatum) to the twilight of her lives.

As an author, Walton is fascinated by teasing apart genre. Tooth and Claw vivisects a Trollopian story by populating it with cannibal dragons and Small Change sets pre-war and mid-war British mysteries in the middle of a Nazi-ruled Britain. Among Others is the only book I’ve read by her that doesn’t explicitly do this, but its frank examination of fandom in the seventies while also telling the story of a magical girl wronged by her evil mother circles around this. (I’m not sure if her first novel, The King’s Peace, does the same, but I’m excited to find it.) In the same vein, My Real Children tackles sweeping family sagas by contrasting and comparing two possible sagas. Through her light, elegant, and poignant prose, Walton manages to cram two entire lives into three hundred and twenty pages. When I say I binge read it, I mean that it was mostly involuntary—I flung myself on the couch and could not rouse myself to fix dinner or go to the bathroom because I had to find out what awful thing Mark was doing and saying, how lovely Bee was, and the fate of Patricia’s beautiful children.

(Granted, as someone who played The Sims 2 into the ground in middle school in order to construct her own sweeping family sagas, I am incredibly biased, but I’ve seen the power of Walton’s prose in her other books.)

It may seem that there’s a clear winner between Patricia’s two lives—the one where she gets to be a well-known, wealthy travel writer, settle down with the woman of her dreams, and have happily adjusted children is surely better than suffering through a marriage with the cruel Mark. But Pat’s world is the poorer of the two, constantly on the brink of war and environmentally devastated, two factors that eat away at their lives and happiness. (The only silver lining? There’s a cure for AIDS in her world.) In fact, both worlds are alternate history; while Trisha’s resembles ours the most, there’s still a research station on the moon that her son George eventually works on. This makes Patricia’s ultimate question heartbreaking—not knowing which life is real and which isn’t, any attempt to determine which one is either means denying the earth or denying her own happiness.

And what happiness it is. Pat and Bee are a love story for the ages, all the more so because we follow them from their first meeting to their decision to have children to their fight to stay together through disability and illness. Pat realizes she’s in love with Bee while spending time in her beloved Florence, wanting to tell Bee everything, and the two finally kiss as if it’s inevitable. While their relationship is idyllic, with accepting friends, summers in Italy, and precocious children, they still struggle through legal discrimination, the loss of Bee’s legs, and the beginning of Pat’s dementia. At a certain point, faced with terminal illness, the two, in Florence with their family as always, discuss driving off a cliff together. I immediately bawled, because I wanted them to never be parted but also, you know, not commit suicide. (Heartbreakingly, Trisha sees Bee in her timeline, leaving Patricia to wonder what would have happened if she approached her, before concluding that Bee is too wonderful of a person to not have a partner at that age.)

My Real Children is a tremendous experience, with an ending that will leave you both satisfyingly frustrated and in awe of Walton’s powers. This is the kind of speculative fiction that I believe in—fiction that truly makes us speculate about the world around us in new and unique ways.

8 thoughts on “Review: My Real Children”