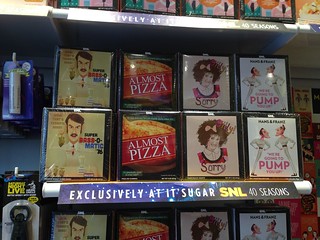 It’sugar, an amazing candy store chain, is doing a Saturday Night Live line for the show’s fortieth anniversary. (I have my eyes on a Bass-o-Matic magnet and, of course, all the Stefon merchandise.) I love that I live in a major city. I cannot stress this enough.

Captain Awkward answers a woman who married the wrong person with something beautiful about the work of silences:

As to the fallacies that got you here, dear LW, good relationships do require “work,” like, someone has to pay the bills and do the dishes and clean the cat box and decide how often you have sex and where you will put your money and whether you actually want kids. Those things don’t naturally get done on their own just because you like the way someone leans and they like the cut of your jib. You have to decide things together, and you have to show up for each other and listen to each other and be on each other’s team. That’s the good kind of work. The bad kind of work, for me, is the “Let me make another pro and con list about staying together vs. leaving and hide how much I’ve been crying/looking for apartments where I live by myself/coming up the back stairs so I have a minute to arrange my face before I see you” kind of work. The work of silences. The work of pretending. The work of talking about everything but the most basic contents of your heart, because if he knew about your doubts he would leave or he would voice his doubts and you’re not sure you’re ready for that yet. The work that happens when your relationship is your chief source of anxiety and stress, instead of being the bulwark and comfort against other stressors. The work of hearing someone tell you that “you’re such a great couple,” and you thinking “oh great, that’s another person I’ll disappoint if I leave.” The work of hiding in plain sight inside your own life.

The work of making yourself and your dreams smaller in order to stay is almost always going to be too much work.

Even the men willing to come to the table after accepting the invitation often refuse to be made uncomfortable. There’s no progress to be had if in order to get men engaged they are allowed to remain ensconced in their privilege. That defeats the purpose. The necessary work of feminist movement will challenge men to understand their complicity and require them to complete very difficult tasks. That’s what revolution is.

At The Appendix, Matthew Goldmark examines Star Trek from a lot of different angles, but specifically looking at in the context of colonialism. Fascinating and much-needed criticism.

At Believer, Alexandra Molotkow examines several memoirs by rock groupies and rock wives to examine how their selves end up obliterated by their men in their lives.

Struggling digital romance publisher Ellora’s Cave is suing Dear Author for defamation, because the blog reported facts about their mismanaged finances. On the one hand, it completely sucks that Dear Author has to pony up to fight these charges. On the other hand, surely this suit will be dismissed out of court?

Criticism and art are symbiotic that way: Compelling art engenders compelling criticism. The contemporary television landscape is so beautifully various, complicated, and divisive, capable of sparking engaged conversations about race, class, sexuality, gender, and identity at large. But to parse these pieces of art, whether in the form of The Real Housewives or Pretty Little Liars or Game of Thrones, you need someone willing to see the once denigrated as the now important and, by extension, worthy not only of proper copyediting, but sophisticated writers at the very top of their game, befitting a publication of its stature.